Tater tots from a bag are delicious.

If you are hammered.

When you’re hung over, smash them shits in the morning into hash browns.

Pub I frequented in university did “irish nachos” with waffle fries instead of tortilla chips.

I still dream about them sometimes.

The Joyce on 4th, a great Irish pub in downtown Calgary, does these - legit my favourite nachos anywhere.

Kicked off my club season this weekend at Green Meadow CC in Knoxville. I love this place, always feels like my home away from home. Obviously, I had to experience their club sandwich and document it.

This was a solid club and was not an imposter. It was solid and checked a lot of boxes but had some opportunities for improvement. More meat, more consistent tomato slices and better bread could take it to the next level, but it was still a fantastic post round sandwich.

The sweet potato wedges were decent but did not blow me away. They would have been better as fries. I am a big fan of sweet potato fries because I can congratulate myself for making a marginally healthy choice by not eating fried potatoes. Small victories like this are essential. 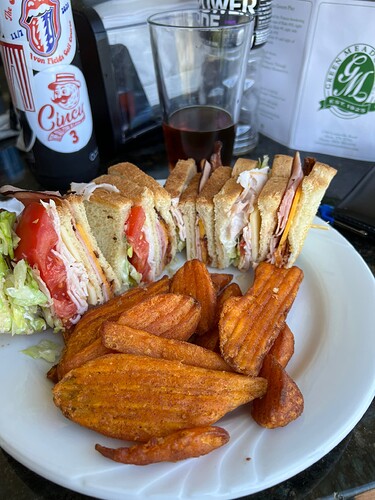 I’ll give a full review of my club’s club sandwich at a later date, but I will say it’s probably my most ordered item. I’ll frequently get one to-go after a weekend round have it for lunch on Monday. It’s not quite as good having it immediately after playing (crisp in the bread goes away), and it limits the side options (chips instead of fries - regular or sweet potato) but it makes being back at work a bit more palatable.

there more than likely is a tomato crime being committed here.

because they’re sweet. don’t hate the player, hate the game.

After a pretty brutal men’s club match play loss nearby, I decided to stop in at the Greenery, which is a bar/restaurant connected to Diablo Hills Golf Course, a fun nine holer across the street from my house. The Greenery is probably more popular than the course. I hadn’t eaten there yet a year after moving in, but I’ve been meaning to try the club just for this thread, and a shitty round was just the excuse. 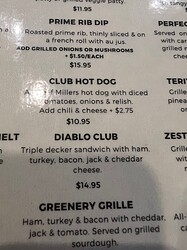 The menu description is a solid start. Diablo doesn’t mean spicy around these parts, but instead refers to Mount Diablo that looks over the area. 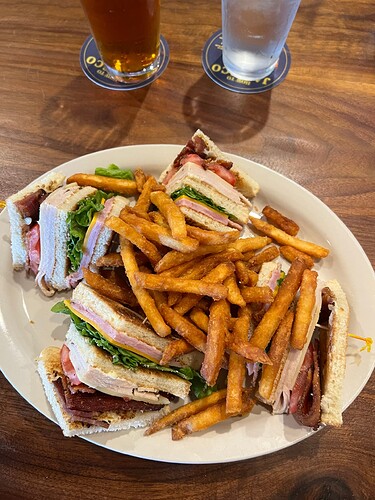 Wedges are arranged on the outside of the plate and then they dump probably what amounts to two handfuls of twice fried fries over the top. And they use the classic toothpicks with the little yellow ribbons. 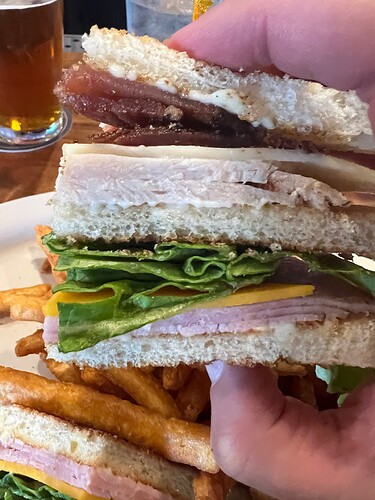 Construction is extremely solid, but not so perfect that it’s unnatural. One wedge is a little off, but that tells me that a real person put this together with some care. The arrangement of bacon, tomato, jack and turkey on the top half, and lettuce, cheddar and ham on the bottom was solid. No one ingredient dominated. It was like a symphony of ingredients coming together to create an overall “Club Sandwich” flavor.

Also, I feel like I need to note the amount of tomato was just right. Just enough to get a little tomato in every bite, but not so much that it falls out or juices drip. (That little piece in the pic was from a finished wedge). 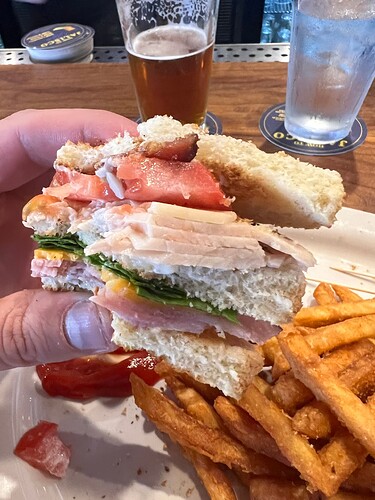 The bread is awesome. Thin sliced sourdough toasted to perfection. I was worried it was scratch your mouth toasted, but my mouth remains unscathed. The sandwich never fell apart, except on the last small bite of a wedge (see pic above).

Maybe could’ve use a touch more mayo on one of the wedges, but on the others it was a perfect amount.

Sides
Fries were the only option. The Greenery keeps it simple here. However, they were probably the best fries I’ve had in at least a couple years. The fries were super crunchy, every single one.

Overall
My club sandwich consumption has been limited the past year or two, so I don’t want to give this a 9 or a 10 and skew the scale. I can say that this is a classic, no frills, everything you want, nothing you don’t type of club sandwich, and I thoroughly enjoyed every bite.

Let’s go with 8.4 for the 84 I trudged through this morning.

I just moved away from the bay area and would play diablo in the afternoons when i had free time once in awhile. Really regretting never getting that club!