The Steeplechase at Jeffersonville July 31st in Philly-area

We’re excited to announce to everyone The Steeplechase at Jeffersonville. This event is taking place the morning of Saturday, July 31 at Jeffersonville Golf Club in West Norriton (Philly ‘burbs), Pa.

We have 40 (EDIT – 80+) spots reserved at the course (block of tee times) and will go out in that 7-10 a.m. range. Format details and groupings will be finalized later, but the overall structure will be quota.

If you’d like to register, please fill out this form and we’ll be in touch in the coming weeks to confirm your spot. First come, first serve for registrations.

Cost is $80 (tee time $68 + food and drink voucher $12). We are required to prepay for the tee times two weeks before the event, so I’ll be collecting payment in early July. Anyone who can’t pre-pay two weeks before risks losing his/her spot.

We have two NIT spots for this event!

The name of the event is a nod to the course history. Prior to becoming a golf course, the land was used for steeplechase horse racing in the late 1800s and early 1900s. The steeplechase races featured thoroughbreds jumping over obstacles on a half-mile, oval track that was located where the 11th and 16th holes currently stand. This played a role in deriving the number 27 on the course in the old Jeffersonville logo (shoutout to anyone who remembers that logo).

The land was purchased privately in 1919 and the track was closed in the late 1920s. Donald Ross was then hired to convert the property into an 18-hole golf course, which opened a few years later. The Evans family continued to operate the golf course until West Norriton Township purchased the property in 1972.

Along with some long, drawn out text about history…we will have some special stuff with course setup, along with:

Proceeds from the event will benefit the National MS Society.

Shoutout to co-host @Craigstands for all of the back-and-forth and brainstorming so far. Hope to see everyone out there!

Come one come all and join us at The Steeplecase, I can assure you this will be one day at the racetrack you will not want to forget. Have a couple drinks, maybe some Philly soft pretzels, a water ice, enjoy some good company and a classic Donald Ross muni! 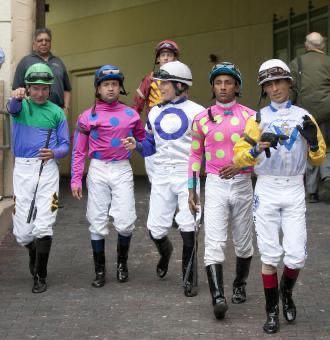 Also bonus points if you come dressed like this!

Very excited and signed up!!!

This feels like the perfect place for the boys to do finish off a Strapped Philly. After living the C-Suite life at Rolling Green with @TomCoyne in May, they should come right back through at the end of July. Wash themselves clean of their sins in the Delaware. I can see it already @MerchCzar running up the Art Museum steps and @Randy giving a scathing review of a real Philly cheesesteak. Storylines are endless @djpie.

Being trying to give myself a reason to come up from Maryland to play Jeffersonville. Looks like I have a reason now. Signed up

Holy shit this is just over 5 miles from where my wife’s aunt lives. Shame we can’t travel internationally from Australia at this stage otherwise I would have quietly suggested we drop in & say hi. Good luck with the event!

Excited to see a refuge event in the area. Looking forward to meeting everyone and playing golf at a great local muni.

Hard to believe, but we are already at 40 players.

Continue to register. If we get enough interest, we’ll look into booking more spots and seeing what other options there are to expand this.

Thanks to everyone for the great response so far. Truly looking forward to this.

Lol! I’m so excited for a Philly event!!!

Just got on the wait list, would be a good excuse to visit my sister in Philly.

We’ll do our best to get everyone in that we can! We will be in touch in the next few weeks once we can sort some things out.

Well that escalated quickly. Signed up for wait list.

If there’s sufficient interest, could we take over the course for a morning with a shotgun start?

Definitely a good idea that we are looking into. My understanding is they are looking to avoid shotguns on Saturday mornings this year but I’m looking into how we can make this work for everyone interested. We might be able to make that happen.

The more interest, the more likely we are to get a shotgun.

Good news: we got another eight (minimum) on top of the initial 40. So up to 48 available spots, and still working on more. Keep the registrations coming and we’ll figure it out!

Yeah, I am signing up for the waiting list, it looks like! Crazy we’ve already filled up

I think we’ll figure out a way to get you in! We’re close to figuring it out – just need to see how much more interest we get in the next few weeks.