Great itinerary, hit the Knack in Orleans for a post-Highland Links meal, Mom and Pops in Chatham also great for burgers and a brew. If you need another course to fill out I’d recommend South Shore Country Club in Hingham or Waverly Oaks in Plymouth.

I live in Plymouth and can definitely help on the golf and restaurant fronts here. Aside from Southers, Crosswinds is a good spot with 27 holes and great conditioning. For eats and drinks in Plymouth, downtown has a lot of good spots. I love Dillon’s Local, which is a smallish pub with killer food. The owner, Colin, is a single digit handicap player and a super nice guy. Speedwell tavern has the best beer selection in town and really good wings and burgers. I’d avoid anywhere on the waterfront if you’re here on a weekend. They will be mobbed with tourists. Second Wind brewing is right in downtown Plymouth and has really good beers. It’s tiny, but a cool spot. The Artisan Pig on Main Street is also terrific, with the best brick over pizza anywhere close by.

Great lineup! Corner Store in Orleans or Chatham is a great spot for post round burritos. Or, pre-round breakfast burritos.

the steak breakfast burrito will make you mad you didnt buy 2.

The restaurant at Captains Golf Course in Brewster has one of the best burgers I’ve had the last few years.

Rock Harbor Grill and the Orleans Inn are both pretty good spots after your round at Highland.

Treehouse brewing in Sandwich for a beer or two if you have time.

How are we looking for Maplegate?

Not sure if anyone’s been out to Shaker Hills recently, but I went this weekend and ended up being… surprised by a few things but notably this: 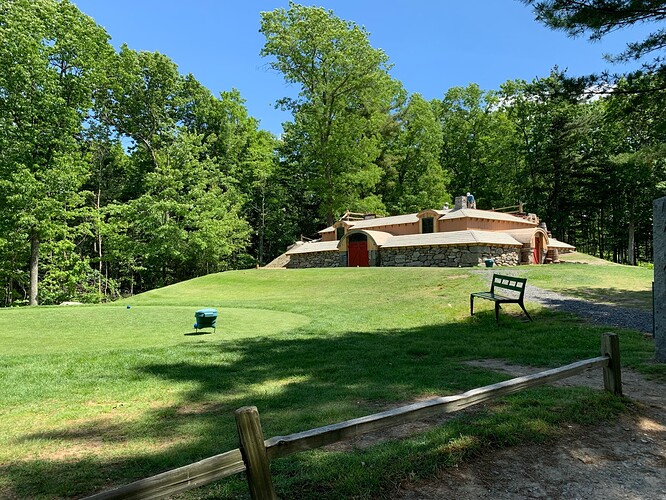 No, that’s not a clubhouse. It must be some kind of Massachusetts hobbit house with a tee on top

So, we did not meet the minimums required to have an “event” by what they told me when I first reached out to them about hosting us but they never sent me a contract so I am not sure what is happening at the the moment. Reached out about just letting us have 3 tee times so the people who signed up can still play but I am waiting to hear back. Not sure if the person who runs events works on weekends. Feel like since all I asked for was a block of tee times (never asked for food or anything) and was giving most of them back with over a week to go, keeping 3 shouldn’t have been a big deal but I will hopefully hear back at some point today and I will give an update when I know more.

How is it playing? I haven’t made the trek up there yet, but it’s on the list.

It was actually pretty disappointing based on how I remembered it. Granted, I think the last time I played there was maybe 2014, so it had been a while, but it was a strange experience.

I got to the first tee with a starter sitting there with an iPad in hand, presumably with info on groups and who was scheduled to start when, but I got there 5 minutes before my scheduled tee time to learn that the cart already in the middle of the fairway was the twosome with whom I was paired at my tee time. Somehow he told them to go and completely forgot me (and I checked in and paid for the round 45 minutes ahead of time, not like I was rushing in last minute and hadn’t checked in). Not wanting to make it awkward by aiming a ball right at them in the fairway, I drove up to meet them and skipped the first hole.

From there, the course was just rougher around the edges than I remembered. I still liked the layout as a whole, but the conditioning was not what I would’ve expected for a course that prices itself at that ~$100/round on the weekend area. The bunkers needed some love: most did not have nearly enough sand and looked more like dirt, and many bunkers looked smaller than I can remember and with faces/edges that were worn and looked like they needed replanting.

Again, given its price point and the fact that we’re a good ways out of the spring/aeration part of the calendar where I’d understand the greens not being in at least decent shape, the greens were also in the worst shape of any round I’ve played around Boston this year (Butter Brook, Pinehills, etc). It looked like they spray painted them or were treating them with some kind of pesticide/chemical. They were not natural green looking at all, and that may have been hiding the fact that they were downright bumpy and somewhat patchy in spots. In fact, there was a large area dead in the center of the second green that had small stakes around it as GUR.

The other crazy thing to me is this thing that I jokingly mentioned above. It was like they were going for these gimmicks to bring in tourists rather than actually caring for their course and providing good playing conditions. On the third tee, which is typically a downhill par 3 with a pond to the left, new tees were added to the left to change the shot to be shorter but all carry over water. I don’t mind the idea, but on course they were “advertising” the tee as a “new, infiniti (sic) tee” lest I miss some new ride/feature they’d included. When you get to the back corner of the property with the 6th and 13th tees, they added that house thing that I mentioned before. There were signs near those tee boxes advertising the Roof Shot or some similar name. I’m sure it has a nice view of those two holes, but it’s a complete gimmick: they invite you to hit your ball from up there, but it’s behind the back Gold tees, so most people shouldn’t be playing from back there anyway. The idea of spending money to build that while the course conditions in general were less than decent boggles my mind. It’s genuinely one of the most bizarre things I’ve seen on any golf course.

There are actually a lot of solid holes that I liked. I really like the 2-3-4-5 area playing around those couple of ponds, and I think there are a lot of nice areas of the course, but it’s just not been kept up as well as I remember it, which is a shame. I should’ve known that there might be an issue when I saw some unfriendly Google reviews of recent, like there have been with Red Tail (yet to play there this year but I hear it’s a bit of a mess).

I would 10 times out of 10 go play Butter Brook in that neck of the woods over Shaker Hills. It’s just night and day in better shape with probably an equally interesting layout. It’s a shame, because I played Shaker a decent amount back a few years ago and was hoping it was still as good as I remembered, which it wasn’t.

Highfields and Wachusett both blow Shaker and Red Tail out of the water on both conditioning, layout, and overall experience yet never get mentioned on their level.

Shaker and Red Tail are living off their 2010 reputation and neither are remotely worth the money.

I played Wachusett last week for first time. Really enjoyed it and it was in great shape.

Thanks for sharing… this place has some potential, but is just the most poorly conditioned course imaginable. A little TLC and we might have a stew going.

Unrelated… does anyone know when the boston courses (GW and Willy J) release tee times? Looking to make a tee time for sunday and dont want to miss it in the rush.

Much obliged! Would be happy to add someone from the Boston crew if they I could grab one…currently have a 3some of my dad and a buddy of mine.

The Knack is excellent and on your way back from Truro, too, but not a ton of seating depending on the time of day. If you want to dine closer to the water, I recommend Mac’s on the Pier in Wellfleet - window service with picnic tables on the beach, BYOB, and you can get everything from whole lobsters to fried clams to local oysters to burritos. It’s a very short detour from Rt. 6 on the way to or from Truro, and particularly lovely at sunset.

It’s four days in advance, so tomorrow at 7am if trying for Sunday.

Permit holders can do it five days in advance though, so I wouldn’t get your hopes up for an early tee time.

Fingers crossed. Something from 11-1 would work so I’ll keep the group updated incase anyone wants to join

Early Morning tee times at GW are the most exclusive ones in the state, public or private.