Looking for NLU fans in the Las Vegas area.

Most courses in Vegas are built around housing developments so although most allow walking, with the elevation changes some can be a tough walk.

Paiute Three Pete Dye Courses (best public Golf in Vegas, excluding the $500 per round courses)
Boulder Creek (three challenging 9 hole courses, especially when the wind is up)
Angel Park
The Legacy (front nine is great, play it twice if you can and skip the back)
Primm Valley Lakes Course

There are many other courses but these are my favorites that are a good walk.

I use to live in Vegas for a few years. I will be visiting March 8th-10th and will be shooting to get 5 rounds in. I am coming alone and it would be nice to play with some refugees. Let me know if you would like to get out while I’m in town.

Open to play anywhere on would like to get out on Paiute, Red Rocks, Chimera and possibly Reflection Bay.

Coming to Vegas with a few golf buddies in a couple weeks (April 8-11). Any advice on a few fun, cool, reasonable priced courses to play and how to score local rates? Looking for 1 round Friday, 2 on Saturday and 1 early Sunday.

I can recommend some courses but as far as local rates without a local you’re on your own. They are pretty strict. All players need to have a local ID to get local rates.

Best Course is Paiute. Three Pete Dye courses. There is a Korn Ferry event the week after you are there so could be interesting.

Of course there are obvious courses I skipped like Shadow Creek, Cascata, and Wynn resort. all $250-$600. Good news is that you won’t need a local ID to get this rate.

We just got back from our march madness golf trip yesterday

We played Pauite Snow. Course was in great shape considering they’ve had to deal with snow this winter. Super playable course. The greens were very challenging for us. Our favorite course of the trip.

We then played 36 at primm. With the underpar deal its hard to beat the value. We’ve played there many times before. They’re challenging layouts and they don’t keep the courses up that nice but they are still fun. More difficult than Paiute IMO.

We played Chimera on Friday afternoon. The course is in Great shape but it was SLOW. Played around 5 hours.

Finally played Stallion Mountain on Saturday. Overall average course but we had the first tee time of the day so we were done in under 3 hours. Plus a huge bonus for those who listen to the chasing scratch pod. LGLG.

I also listen to Chasing Scratch, but there’s no way I would ever go back to Stallion Mountain. A little history on the joint: was originally an affordable private club owned by pro golfer Jim Colbert, and it was named Sunrise CC. Started off with 36 holes, the North and South courses. A composite routing was used during the 1991 Las Vegas Invitational, and that was where Chip Beck shot his 59 (2nd ever on Tour). Around 1995-96, a 3rd 18 - the West course - opened. Not long after that though, the property was sold to Asshole Billy Walters (same guy that got caught for insider trading and almost got Phil Mickelson to go to jail with him). Tried to turn the place into an expensive resort, but couldn’t command a high price. Partly because of the location, partly because it’s a mediocre forgettable design, and partly due to the course being surrounded by middle class housing. They bulldozed the North and South courses in the mid 2000s to build more homesites. They even featured Stallion Mountain in the 2nd season of GC’s Big Break (along with other Walters properties Royal Links and Bali Hai), but that still wasn’t enough to get people to go. I think Walters may have had to sell the place after his stint in jail, but his stench on the place is the reason I won’t go back. The east side of the valley is the lower income area, it was the right place for an affordable club, and Walters just shit on that philosophy like it didn’t matter.

Hey, just joined The Nest and looking for other Vegas members. Doesn’t look like we have much traction out here? I wasn’t able to add my name to roll call but fee free to add me if it’s still active.

Hey everyone! Dropping in from the Denver group. I have to be in Vegas Next Friday and am planning on getting a round in Friday morning.

Any recommendations? Closer to the strip is better as I am ubering everywhere

I played Las Vegas National near the strip last time out. Mid century parkland course - felt more like Florida than Vegas. (Aka no desert golf)

I had a fun time there, it was kitschy. So many cool mid century houses on the perimeter. 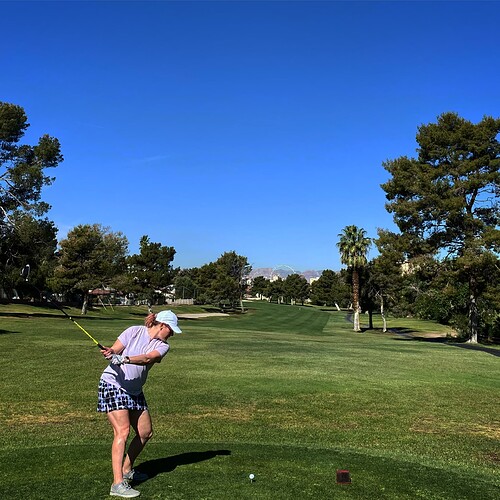 I was hoping to find some Vegas peeps in here that could either point me towards a solid course, or join me when I’m there November 16-21.

Seems like I might be yelling into the void here, but if anyone is up to play, let me know!

The Paiute courses are really solid and they have a great 2fer deal there if you play 2 of the courses on the same day. About 40 minutes or so outside of “the strip”

Also people poo-poo TPC, but I have enjoyed the few times I played TPC Las Vegas (our friend used to live on a house off 10th green, so it was always very convenient to play there). Right up near the JW Marriott.

And as my above post - I liked LV National - something different than 'desert golf" out there.

I’ve also played angel park, rio secco, wolf creek, Rhodes ranch out there. Wolf Creek is video game golf - insane views, kind of crazy golf. the others were fine - had a good time, nothing super exciting to write home about. Rio Secco is home of Butch Harmon’s golf school…insane houses around that place, strip views, lost a lot of balls.

Pauite is the best daily fee course In Vegas. Three Pete Dye Courses. Always in great shape. Other layouts. Pretty wide off the tee. So many other course in terrible shape. Angle Park is fun, good shape, fast greens. I live here. I’m out of town that week or I would join you.

Getting the ball rolling on a potential Regional Roost.

I created a new thread so we can all communicate and iron out the details there.

Thank you all for showing in a Regional Roost! I’m starting this thread so it’ll be easier to communicate and finalize the name, logo, game formats, and events. For all those who haven’t signed up, but are interested, you can add your name to the list below:

Hi all! I’ll be traveling to LV next week and my plan is to play 36 at Paiute on Wednesday. Is Uber the best way to get there and back from the strip? Thanks!

Rental car is the best way to get there from the strip. An Uber is going to be so expensive, you may as well play the Wynn.

EDIT: Uber fare estimator says $43 from Bellagio (center strip) each way pretip, which is not as much as I thought, but still pretty pricy. And you’d better hope there’s no surge pricing.

You should call Paiute and ask what they can arrange. Getting an Uber to will be very easy, getting picked up will be more difficult as There is no normal Uber traffic near Paiute. Depending on where you are staying your hotel could arrange a limo/towncar.
Renting a car might be the best option. Most resorts have car rental pick up on site.

Any semi-budget friendly hotel recs on the strip? Guys trip is looking to go lighter on the hotel spending