Got the all clear from the vet… let’s have a day. Enjoy yourself!

Vettiner recently has been in really good shape (public course standards) besides the bunkers which are damn near unplayable. Hopefully they’'ll figure that out before the tournament end of June.

@nicke93 there are so many tee shots that make me anxious out there. If I play in the Metro I’ll probably hit tons of irons and hybrids and try and take 6 or 7s out of play.

I think public golf in Louisville is probably average it just suffers from being compared to Lexington (one of the most accessible and affordable municipal and public golf cities you’ll find) and Northern Kentucky.

We just moved back to Knoxville in October and I forgot how good public golf can be. Did a $40 a month range pass at the local muni and if I get there around 4, I hit a bucket and pay $10 to play until dark. Usually get 18-27 in at least 1 day a week.

It’s been 10 years, I could’ve argued Shawnee was the best public course in Louisville. It’s the only one I used to play back in 2009-2010

Hey y’all, just wanted to reach out on behalf of the High Cotton Club and see if anyone is interested in coming down to the recently opened Park Mammoth Golf Club for one of our Roost Rodeo’s on May 22nd. I’ve yet to be down there, but the course looks amazing and we’ve had multiple groups out in the first 5 days since opening. Tee times start at 12 PM and it is a 6 hole match play format where you play a match against each member of your group. Feel free to reach out to myself or @leftysauce if you have any questions! 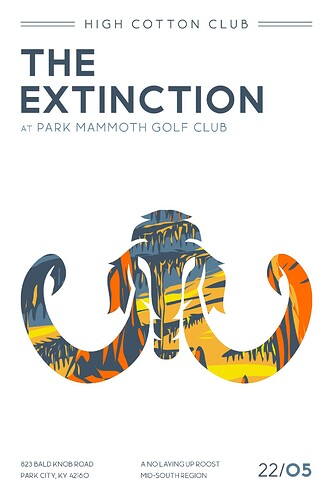 Played Big Blue over the weekend and while it was a solid course, the conditions of the greens really hurt the overall experience. Looks like they just aerated which is understandable given the time of the year but putting was awful. Tee to green, course was in great shape but it was impossible to sniff the hole from more than 8 feet out, balls were just bouncing everywhere. I’ve played plenty of aerated courses where that wasn’t the case so I’m not sure why this round stood out so much. Beyond that, had amazing steaks at Tony’s, chicken sandwich at Bear & The Butcher, and pizzas at Mirror Twin Brewing.

You guys had great rec’s for my two weekends in KY, thank you & please pop in to the WI Roll Call if you come up to our neck of the woods.

Love the logo! Wish I could make it down…Who is running that course?

@leftysauce is the SME on that, I’ve personally yet to be at the course since it just opened last week. He has been 3 times already and has a little more inside info on it. It should be noted that a hat and T-shirt with that logo are part of the registration fee for the event for anyone who is interested!

Architect said it’s a single guy with pockets from Bowling Green…allegedly he had a spat with someone at club at Olde Stone and instead of paying a portion of his disputed bill, he bought 300 acres of land & hired people to build his own course.

Completely unsubstantiated, but that’s what @leftysauce & I heard when we were there opening day…

Fwiw, we met the owner, super, Pro, GM, multiple employees (starter, agronomy crew) and one of the architects - everyone was extremely friendly and genuinely giddy that the tee sheet was full (it’s been pretty much full everyday since they opened)

I’m headed down to Richmond for a wedding next weekend, staying Friday night in Berea. Not sure if I’ll be able to sneak away and golf, but I’m looking at Gibson Bay, or looks like there is a single course in Berea. Anybody familiar with either place? I’d likely try and sneak out as early as they’d let me, so hopefully like 6-6:30.

I am from Richmond. Gibson is your best option. Boone’s Trace is also fun, but its on the north side of Richmond, so not great if you’re staying in Berea. Battlefield would be your closest option, and is a fun little course, but Gibson Bay is the next level up.

Check out Dreaming Creek Brewery if you’re in need of a libation after your round!

Coming to Lexington in a couple of weeks for a quick golf trip. Got: Kearny Hills, Gibson Bay (Fin Scooters) and Boone National lined up. Can’t decide between Griffin Gate and Big Blue for the last round, any thoughts?

If it’s May 22, you can always come join us down at Park Mammoth!

My vote would be Big Blue, with the sole factor of I don’t like having residences in play on a golf course.

Also, love a good university course. Many memories of joining members of the Transylvania University golf team, pretending to be on the team in order to walk for free at Big Blue.

Hey everyone, cross posting from the Indiana thread if any of you Kentucky sickos want to get involved with southern Indiana!

Hey y’all, putting out a call for anyone that’s interested in connecting more and even a potential Roost in 2022-2023! We don’t really have a fresh Indiana roster so check out the Google Sheet attached and get involved. I took the one from earlier in the thread and copied names over but cleared out everything else so double check that you’re in there. Since our state is so spread out I split it into 5 regions that are labeled in the “Regions” tab. These are arbitrary but I tried to keep it ~2 h…

Come to Detroit and play a shit ton of golf next week!

) inspired us all to do something really amazing to help @tchap80, his lovely wife Corin, and their family to help care for their amazing little man, Max. I know it brought some awareness to a lot of us regarding Peroximsomal Biogenesis Disorder. You can brush up on that here: Lets run it back. May 21st, 2022. Detroit. Rackham Golf Course. You, Me, and hopefully another 80 or so of our favorite golfing sicko…

Going to head to Buffalo Trace to restock. Any courses close to consider?

In between Louisville and Georgetown is tough for golf. Frankfort is kind of a dead zone for golf based on my experience. Juniper Hill is close, but is just okay.

If you’re continuing on south a few miles, I’ve always like Canewood and hear good things about Cherry Blossom in Georgetown.