How to (NOT) self immolate on the golf course?

I just had a round at Harding Park and started the front only 5 over (including a triple bogey), arguably the best wedge game and distance control I’ve had in a while. Think I even started 5/7 GIR. Anyway, i made the turn and then proceeded to make 7 on what felt like every back nine hole. Any tips to reset and stay locked in after you absolutely shit the bed? It’s probably worth noting that I often find myself carrying the negative mental space of a three putt over to the next tee box at which point it compounds my bad day. Push Cart Mafia Strong 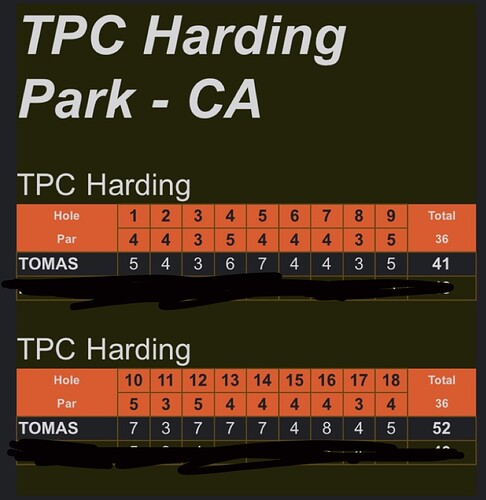 When I figure it out I’ll let you know.

I can’t stop from being butthurt, but I try to not show any outward displays of frustration. Just try to be a good hang with your playing partners and you should naturally chill out. Remember nobody gives a fuck about how you play but they care about the hang.

Contemplated giving up the game yesterday, so probably not the best person to ask

You could try quitting after 9. I’m considering it, myself.

DJ? Is this you? From your honeymoon?

I struggle with this a lot. Often get in my head very quickly on a good round, and start thinking about “going low”, and get mad.

My best advice that works well for me, don’t think about your score at all. I find I play best not when I’m thinking about making par, or birdie, or whatever, but just trying to get the ball in the hole as quickly as possible. And especially over a whole round, if I don’t think about my score, I won’t blow up on the back because as far as I’m concerned, I’m just golfing, not going low.

Hope this helps. Feel free to entirely disregard, as I often fail at following my own advice

It can help. The one year I was a member somewhere I got a serious case of the hosels and it was absolutely awful. I’d walk off all the time.

Harding is a pretty tough back 9 so this can definitely happen.

I would highly recommend a book like “Be a Player” by Pia Nilsson, or something by Rotella. Will give you some tools/options besides don’t think about your score as that is certainly easier said than done!

I mean, you shot 41 on the front with a triple. You made two doubles in the first 3 of the back nine. That’s equivalent to a triple and a bogey. Why would you lose it over that?

Your front nine is proof that you can shoot a decent 9 with a big number or two. Remember that where those numbers are distributed, be it at the beginning of a 9 or end of one, doesn’t impact the ability for you play the next one well.

Getting about 3-4 beers deep always seems to change my perspective.

1-2 pops is definitely performance enhancing for me. Turns south once I try to add on though.

You could try quitting after 9.

Nah, just play the back first.

As a recovering club slammer and hissy fit throwing pouty face bitch, I can only speak to what works for me. It’s definitely been much easier now that I’m not really competing, but still. I don’t think there is one thing that worked overall, but a combination of small things.

After some mistakes I used to constantly think “oh shit now I have to shoot 36 on the back to break 80”. Or just be obsessed with what my score to par currently was. Now I have completely focused on just avoiding big numbers. Somewhere along the way I realized taking out the big numbers, not making more birdies, was bringing my overall scores down and making my enjoyment go up. Obviously easier said than done also is forgetting the previous hole. Finding some way to start each hole fresh, or even a group of holes as “fresh start” can go huge into your overall mindset for the round. I’m going to make a double (or worse) from time to time and recovering has probably been the hardest part.

Seriously good luck in finding something, anything, that can keep you on track. It’s not going to work all the time, and sometimes the answer is to maybe just not golf if you’re dreading going out and feeling that way.

I will second any book by Rotella is sure to provide you with some #perspective and have helped my attitude at times.

God this hit close to home. The biggest thing I do is to try and take deep breaths and make fun of myself. Kinda take a laugh or cry stance. It worked extremely well this weekend when I went from 8 over through 5 to playing the next 9 holes in 1 over with 8 pars and a bogey. Just working to attempt to let thing roll off my back better.

Also, and I say this more as a reminder to myself. Do NOT start pressing to try and get strokes “back”. Those strokes are long gone and hero shots (for most inconsistent golfers) will work at best 1/10 times and will typically lead to another blow up hole.

Also, and I say this more as a reminder to myself. Do NOT start pressing to try and get strokes “back”.

Bingo. You can’t go back and undo a bad score. All you can do is try to avoid it moving forward. And sometimes, you’re gonna 3 putt the next few holes as well. Golf is hard haha.

Obviously if you’re seriously competing there might be situations where you have to be aggressive/passive whatever. I don’t think any of us here are in that situation though.

Appreciate it, yeah I know that fresh feeling can really help. After my front side triple I think I just laughed and moved on. Definitely could have employed that more