I think Rockwood would be a perfect place to meet up, seems pretty central to everyone and while I haven’t played it recently I hear it’s in great shape.

@PsychoScorecard and @ragsu64 if y’all are in TX or DFW, here’s the best place to start getting involved, even if just looking for a group to play a random round. Our more organized events sprung up in here too.

Not sure how many NLU’ers we got here in the Lone Star state, but would love to discuss some of the golf course gems we have. I’m a DFW resident (born and raised) who just graduated from Baylor back in May. I feel like I’ve barely scratched the surface in terms of playing some of the great tracks all over the state, but was fortunate to grow up playing a pretty cool course in Vaquero. I’m kind of a newbie to golf course architecture but really interested in where some of the great tracks are in …

Rockwood is great, play there every Saturday. Clubhouse is still being built but course is good and greens are slick

Does Sunday work? Since I sent that message the other 2 spots on our tee time got taken but there is an 8:10 on Sunday.

No problem. I can do 8:10 on Sunday. Which course? Need to start my visualization practice ASAP

Guise – Extremely excited that some of the 1st round matchups will take place this week. If possible, let’s try to come back to this thread and give some detailed breakdowns of the matches. Possibly something for the losers to do as their punishment?

I don’t want to recount my loss. Please respect my privacy during these trying times.

Does that mean we’ve already had the match?? @FWTexas care to gloat in your presumed victory?

Yes. It could be said that a match happened today. Is there something that BOTH players (not just the winner) get for being the first?

Yes, I lost 3 & 2 to @FWTexas he also took the most beautiful picture of a shank anyone has ever seen.

I will spend most of my morning tomorrow writing a golfers journal-ish style write up about our match today. That way everyone can enjoy.

@NobodiesMedic is an absolute class act. We each had highs and lows but when it came down to it I think I won it on the first tee. 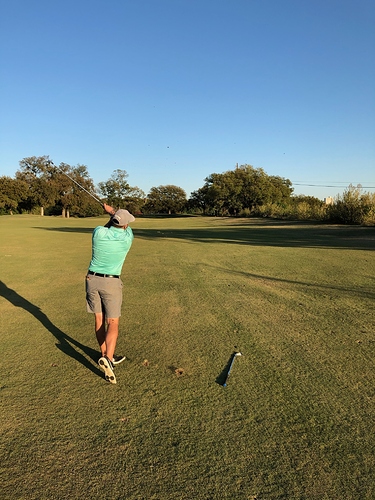 Again, please respect my privacy during this time. Or we could talk about how my calves look?

This is beautiful. It’s like you’re trying to pull the ball back on a string connected to your club.

Honestly I tried for .5 seconds until I realized that the trinity does not give back. And then I just walked back to the cart and really didn’t say anything.

Also @FWTexas can absolutely demolish a golf ball. It’s almost Bryson like. Also, best 2 out of 3?

I hope you’re having a fine day so far. Here is my recount of what happened yesterday.

We met in the parking lot, I knew it was @FWTexas because of his navy No Laying Up visor (shoutout @Randy). At first he seemed like a nice enough gui. We had some light banter, and headed to the range. After a couple of tops, hooks, slices, and general range nonsense he sherpa’d me to the first tee.

Let me be the first to tell you that this match was lost on the first tee. Beautiful welcoming hole and a CRISPY 305 yd drive off the bat, unfortunately it wasn’t mine. @FWTexas kills the ball. I do not. Back to back duck hooks (@DuckDuckHook would be proud) left me with a wedge in from a not so great spot next to 9 tee. Anyone care to guess what happened? I’ll tell you. I shanked a 56* straight right (more on the shanks later). In my “professional” opinion, this hole is not welcoming and I am quite upset.

The next 3 holes go back and forth and we cross 9 all square, which is quite a miracle given some of the shots I hit on the front. Once we hit 10 it was like @NobodiesMedic left and SomebodiesMedic showed up.

As we pulled up to the 12th, a beautiful long par 3, I make the comment “well, looks like no one has hit my car so that’s good!”. No laughs could be heard. I nearly regretted my statement as soon as I hit my tee shot. 197yds, 4 iron, DEAD RIGHT, luckily it hit the tree about 10 yards past the parking lot so no vehicles were harmed on this day. So now it was time to make the mega 3! I retee and put the golf ball exactly where I want it, slightly right into a funnel pin and naturally, with all the rain we’ve gotten recently, my ball tracks beautifully and stops 2 feet short of the green in the mud. It’s fine, everything is fine. @FWTexas chips up and on, unfortunately he did not see the ridge just past the hole and his ball feeds down to the backside of the green. ‘I’ve got a chance at this’ I’m thinking in my head. Nope. I lost the hole thanks to a clutch 5 foot putt.

Have any of you ever seen or read about a trainwreck? It’s weirdly beautiful. Anyways, I digress.

On to the 13th a par 5, lucky number 13. I’ve thought about getting a tattoo on Friday the 13th several times. Again, I digress. We both hit drives, one beautiful (luckily mine) and one a bit of a block. I should add we had a group of younger gentlemen in front of us on the green for the next part. @FWTexas is a bit blocked out from a tree for going directly at the pin and decides to hit “a punch 8 iron”, guis he kills the ball. His punch ended up running up on the green and was promptly pushed off of the green and stepped into the mud by said group in front of us. As we get to the green I walked to the next tee box (my approach ended up in the bunker so we don’t need to talk about it) to see if the group ahead left a club we had found and to apologize for hitting into them which was met with a “yeah that’s my club, and it’s fine”. I should add that the ‘it’s fine’ portion of the response was quite snappy, but that’s neither here nor there. I lose the hole.

After a couple of unremarkable holes, mainly because I lost them, we get to the moment.

Down 2 with 2 to play and hoping to at least come back and take it to a putt off. It happens.

THE shank. I know what you’re thinking, and no that spec that looks on line is not the ball.

I proceed to drop in place and hit a 6 iron pin high and hope for the best. Boy did I get close! @FWTexas hits the green in two but he is well above the hole, and in the spirit of competitiveness I refuse to tell him about what I see with the huge runoff a foot past the hole. To my good fortune, he hits it a foot long and the slope takes it off the green. 'I really have a chance here’ I thought to myself again foolishly. I lost the hole, the match, and my golf ball.

I’ll post some pictures here in a bit when I dry off my keyboard.

Where did y’all play?

Rockwood in Fort Worth.