Fantastic conversation with Pia & Lynn from Vision 54. I picked up the book earlier this year after Soly talked about it in the goals pod. Anyone else trying to get the boxes applied? With Soly going looooow today, the recommendation looks to be well placed. The snow/COVID combo has busted my season, but fingers crossed for things ahead.
Was able to take my Riomar’s off to complete the pod trio lol. 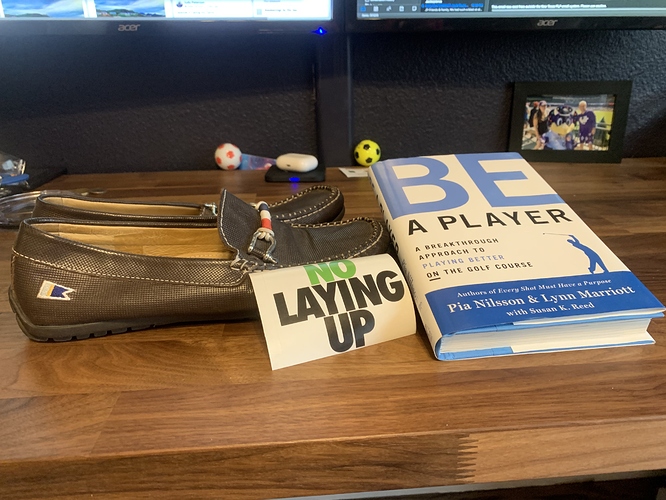 I picked it up last year after following Patty Tavatanakit at the Thornberry LPGA event last year. I was the volunteer walking scorer as she broke the course record (61). In all her post round interviews she was talking about Vision 54, and I was intrigued.

I read the book in late July / early August, and I’ve been playing the best golf of my life since applying some of the lessons.

Our courses are just opening up again Friday, and I’m in the middle of another re-read this week before getting back out there.

I spent time over the winter reading their other books too. Needless to say, I’m a big fan. Now it’s time to start saving for an in person work shop (especially if I keep improving while having more fun on the course).

Excited to listen. What’s up with the shoes though?

Ahhh. I was intrigued on the ad, but hadn’t gone to Google yet. Listened to 1/4 of it, need to jump all the way in.

I did the 3 day Vision 54 school back around 2006/07. Really picked up a lot of good information and food for thought. They (like any other) don’t give you a magic pill for your golf. Yet it did open my mind to look at me, my feels and my game, rather than just teaching range mechanics. Like all good coaching I think YOU have to actively buy into it and work on it, or it’s just another range tip.

We (Riomar) we’re lucky enough to sponsor this episode!

currently going with the audiobook route (easy to listen to while I work) and feel like it’s really gonna help. there has definitely been a few scenarios described in the book so far that I can relate to, so i’m eager to get back on the course and put this in play

Pod was an incredibly interesting listen. Going to combine the audiobook with a re-read of Hogan’s Fundamental’s of Golf. Determined to come out of this lockdown feeling it.

I was grumpy last night and went out for a walk and listened to the pod. It was a good listen and has me thinking about the book.

I read the book after Soly mentioned it on the goals pod and have been annoying all of my golf friends to read it too. I got a ton out of the book, but it is hard to focus during a round and apply some of the stuff in there.

I was gonna ask @Soly if he did the nine hole drills at the end of each chapter. I read the book, but haven’t done them as I’d feel a bit like an idiot playing 9 holes with a random person keeping my feet together for an entire hole, singing for another hole, etc.

yeah I was also curious about this, the book really made me think back to when i was playing well what kind of things were going on in my “think box” and “play box”. so I don’t know if i really need to do the nine hole drills to find what works best but if I find myself on an empty course i’ll probably try some of them

@iacas I know you’ve said on here you think Soly is too into the mental side of things which makes me think you don’t buy into Be a Player. I’m curious to hear your thoughts.

I’ve shared my thoughts on the mental game many times. So I’m going to be as brief as I can now.

A few people have a “glaring weakness” and should work on their mental game, but overall “the mental game” is a sliver in terms of impacting your score. The vast bulk of it: your actual physical ability. People hit bad shots after a good mental process and good shots after a bad mental process. You could roll Rory McIlroy out of bed, drunk or hung over, piss him off by making fun of his mother and wife, step on his toes, hand him a 60g shafted PING G LE 7-iron, and give him four seconds to hit a shot and he’ll still hit it better than almost everyone else on the forum.

My opinion is in the minority, partly because people like to con themselves into thinking that they don’t actually suck at golf (definitely not including everyone here), it’s just their mental game, and that’s easily fixed… but if that was true, then why doesn’t anyone ever seem to fix it? I’ve never seen someone go from an 18 to a 14 just by working on their mental game, nor someone going from a 3 to scratch.

The mental game was hot in the 90s, early 2000s. It’s cooled off significantly since then. Top golfers by and large (not all, but most) don’t really have “mental game guys” like they used to, and those that do often talk with them about off-course stuff, family stuff, dealing with travel and family life and so on. And given the thin margins on the PGA Tour, sometimes a sliver is enough to help… but for the average golfer, and even the well above-average golfer like @Soly, I think it’s vastly over-rated. Few have a true “glaring weakness” here where their mental game actually affects their physical game measurably.

he’ll still hit it better than almost everyone else on the forum.

“I’d be scratch with a good mental game.”

I agree with a lot of that. From my perspective Pia and Lynn’s philosophy doesn’t say “focusing on your mental game will make you a good player” and it seems to go much deeper than having a good attitude. You don’t buy into the Think Box and Play Box? Do you think professionals lose tournaments to equally talented golfers because of their “mental game”?

You don’t buy into the Think Box and Play Box?

I do, but in the combined time it’s taken you and I to type this stuff up, someone can basically learn all they need to know about the “think box” and the “play box.” And then how many shots would understanding and applying that perfectly help an average golfer save over the course of 100 rounds? Not many.

Do you think professionals lose tournaments to equally talented golfers because of their “mental game”?

As I said, it’s a sliver. Sometimes that’s the difference, but sometimes the guy with the poorer mental game defeats an equally talented golfer because of a good bounce, too.

Really interested in your take and totally agree for each level of golfer learning is going to be different. For all but the best I know, if asked I would say take lessons, improve skills, understand your swing.
I’m just interested on when you talk about the elite players. When Tiger, Jack and many others talk about the mental strength of their games being about 90% of what separates them, you seem to be saying it was that technical skills are actually what does. So taking that further I’m guessing that people who didn’t quite make it on tour, only had one year and fell off or played for 20 years on tour but won once had simply not got good enough swings?
I totally agree that some mental work isn’t likely to get you from 21 to 10, however I know many like Crenshaw at the Masters in 1995, Jack in 1986 etc talked about mentally being different that particular week. It seems to me some unbelievable ball strikers have difficulty in majors. So I have difficulty in thinking that their swing faults just happen to show up that week, rather than the mental requirements or changed “major air” has nothing much to do with it.

I think golfers should have a decent pre-shot routine.

This is maybe the most important part of the mental approach. I know for me that when I force myself to stick to it, I play consistently better than when I can’t get comfortable over the ball and allow myself to waver.