That course is so hard when the greens are rolling fast. It makes sense why Chandler Phillips (10th ranked amateur in the world) is such a good player. Playing that course growing up would turn you into a monster.

I have never been successful when going for this green. One day. 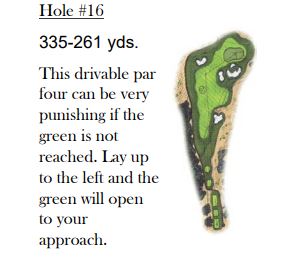 My home course in high school was a nine-hole country club. Opened with a 35 on the front nine, the first time I had ever been under par through nine holes. Went out on the exact same nine holes and shot 41 on the back to finish with a 76. Still the best round I’ve ever shot, but can’t for the life of my figure out how I managed to screw up the same slate of holes that badly.

Can’t recall blowing a great round, but I have one distinct memory of blowing a tournament… felt like an Icarito moment.

I was 17, playing in the men’s club championship at my home club. I’d won the junior title 3 times and finished 2nd in the men’s tournament. I made some mistakes on the back 9, but finished strong to get into a 2-man playoff. It was one of my first times playing in front of a crowd, but I knew the other guy and felt confident that I could win.

Pipe my drive on the 1st, then hit it to 6ft behind the hole to a back pin location. Competitor is in with par. I’m thinking I’ve got one hand on the trophy, I’m actually gonna do it. Deep breath, I’ve got this… Putt hits the left lip and doesn’t fall. I’m completely dejected.

The second hole is a drivable par 4, one of the easiest holes on the course, and the tee is 15ft behind the 1st green. I quickly walk over, chunk/block it maybe 100yds off the tee, and it doesn’t get any better from there. I proceed to make a triple bogey to lose. To say it was a long walk back to the clubhouse would be an understatement. I never won the men’s championship there.

But, fast forward 11yrs later. I bought my first home and immediately joined a nearby semi-private course. A few weeks later, it’s my first time playing in a club championship since high school. It was an admittedly weaker field, but I played well and got the job done. Redemption.

It was just a comment based on that fact that this nolayingup.

Statistically speaking I believe you will have better results going for it though, although a couple of those bunkers look like long tough bunker shots

Pacific Dunes last December, first hole is a short par 4, hit driver to 30ish yards off the green (hard down-wind) and chip in for eagle, then proceed to par 2, and birdie 3. I went out in 31. Then came 10 and 11. To make a long story I shot 73. Was one of the most graceful falls from heaven there has been.

Played that course in a tournament spring 2017, that place is hard in every aspect.

What kind of monster lists the yardage for the tips first?

Played in an AJGA back in high school. Started the second round well outside the cut line. Started par-eagle-par-par-birdie-par-birdie-birdie-birdie. Parred the next 5 to stand on 15 tee -6 for the round. Finished bogey-double-bogey-bogey including a 3 putt on 18 from inside 10 feet to MC by 1 stroke. Breakdown of my 9 hole scores were: 41-41-30-41. 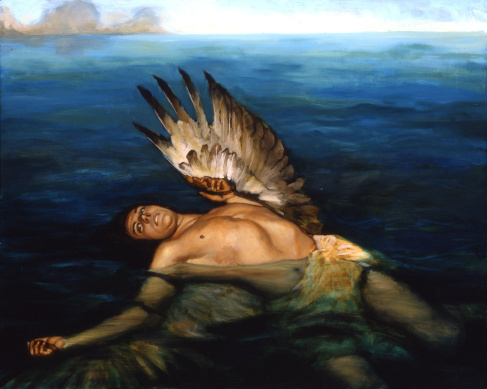 Thank you for sharing, we are all known here. Your quad-birdie a bounce-back for the ages, though.

I’ve broken par on the front 9 four times this year (twice in tournaments) and failed to break 40 on the back each time.

I’ve never shot better than +2 for 18 holes because I can’t seem to string together an entire round without 1-2 major mental mistakes.

I was +8 through 14, never having broken 80. I started thinking about that score and how sweet it would be to achieve a personal best and possibly break 80.

To this day, in response to that karma, I do not like to know my score during the round. I don’t want to know the score at the turn or at any point. Nothing good can come of it!

I know it’s so cliche, but as someone who went from a mid-handicap score (+12) to an embarrassingly high handicap due to lack of rounds, I have to only focus on the shot in front of me these days. Every single time I’ve thought “I only need this to break 90, or I need at least bogey here to do blah, blah, blah” it always backfires. Now, if and when I hit it in the trees, I just focus on what I need to do to get out of trouble, and get to the next shot. Then at the end of the round I get a tall beer, two pencils, and a calculator to add up all the strokes.

he, but as someone who went from a mid-handicap score (+12) to an embarrassingly high handicap due to lack of rounds, I have to only focus on the shot in front of me these days. Every single time I’ve thought “I only need this to break 90, or I need at least bogey here to do blah, blah, blah” it always backfires. Now, if and when I hit it in the trees, I just focus on what I need to do to get out of trouble, and get to the next shot. Then at the end of the round I get a tall beer, two pencils, and a calculator to add up all the strokes.

you should switch to two beers and one pencil

Club Championship qualifier, top 8 gross after 36 holes go through to a KO. I was 17 playing off 7, shot a 75 (+4) in the morning and was going very steady in the afternoon at +5 with only the 18th to go. My dad was walking in front ball spotting the afternoon round after I’d done well in the morning. I’d never qualified before, had no idea if i was in with a chance, usually a 150 would make it so I was there or thereabouts. 2nd shot into the last goes (Icarito style) way right in the trees, my dad “get’s a line on it” and dives in looking. I reload and put it on the green. My dad doesn’t see my provisional go safe and comes bounding out the trees saying he’s found my first. I proceed to make a 10 on the last after failing to make it out of the trees 4 times - my head was gone. I get in the clubhouse and find out an 8 would have seen me through. I could have 4 putted the last and made it in to the KOs if I had immediately declared it lost and my dad hadn’t dived in so quick!

I never got close to qualifying again.

We don’t make cuts, we are a “golf club” not a team, so no scholarships, not even any funding from the school, they even turned down our request to use the school logo on bags that we were purchasing out of our own fundraising.

This is such an awesome detail - well written and amusing as hell. Full marks here!

You didn’t “find” the scorecard, you knew exactly where it was, you’ve looked at this 100 times and you have it saved in your “golf” folder. Nice try Icarrito.

I’ve missed the putt for 79 six times in my life. I’ve got Ray Romano disease something awful.

Yea…that’s what “found” means. Found it on my computer. I didn’t call up AJGA or call pops to go scrambling through old golf stuff at their house