This seems to be a picture of the hole, which suggests the tee shot was slightly downhill. Can’t tell if the green was back uphill of what. 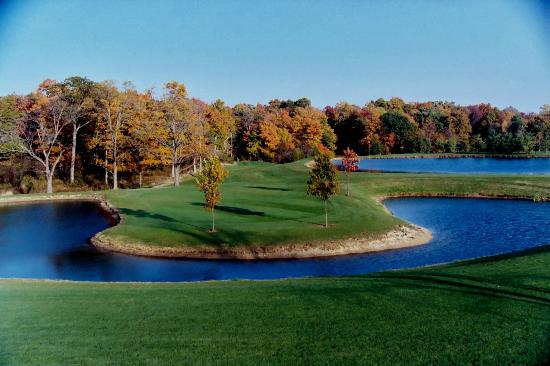 Appears to have been designed by someone named Randy Ballinger, who I’ve not heard of otherwise, and the only two courses he’s credited with one Golf Advisor are the two on that property.

I mean, from that angle it almost looks like it could be a fun short par 4 if the green was directly in line with the fairway.

I was thinking the same thing, though if my (rough) measurement is right, could be a solid mid-long par 3. Slide the tee down and left from current location (and have lots of options for others…all black outlines) and take out a few trees (green circles). Gives great options for a variety of looks and lengths on the hole without needing a gut job. 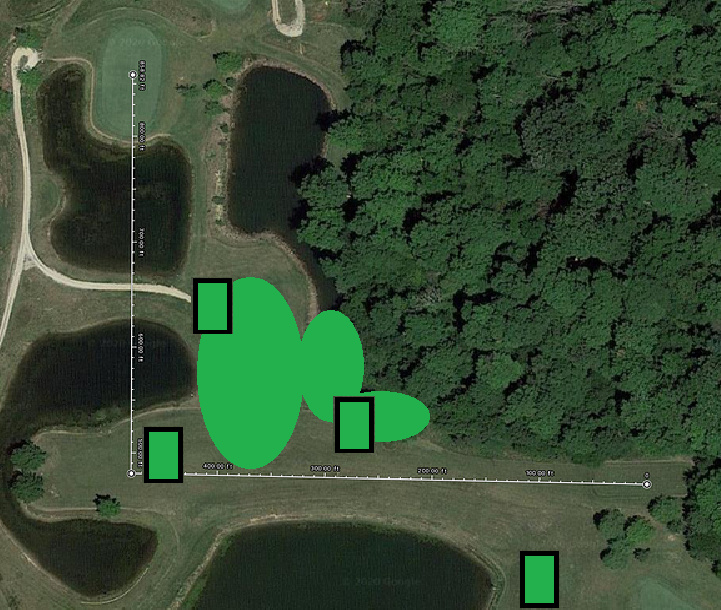 If I remember right, the green fell off on all four sides. I agree, I think it would be a good short to medium length par 3 if you put a tee box at an angle and put it next to the tree line.

Alternative I wondered about was a par 3 through the diagonal gap in the trees.

Take out a few trees on that bottom corner to open up an alley for the back tees. With lots of potential for varying the tees to alter the length and difficulty as required.

Shots bailed out right would then need a chip back towards the water so lots to play on the mind with.

Can we get someone from the GCA - Anyone else like to draw golf courses? / Interested in a design contest? thread to draw a composite 18 layout of the worst holes from the selection here?

Oohhh don’t tempt me with a good time

This course needs a name. I nominate: The Pandemic at Quarantine Run (A Nicklaus Signature Design).

With how many holes in this thread are a bunch of 90 degree dogleg monstrosities, it could be a Tetris problem to make a routing work.

Hole #7 at Indian Peaks on the north side of Denver. This Hale Irwin “gem” includes #7…an otherwise decent, driveable, risk reward short par 4 that needs a haircut.

Apparently Mr. Irwin himself said that if any of the trees on this hole get taken down, he’ll remove his name from the design! LOL 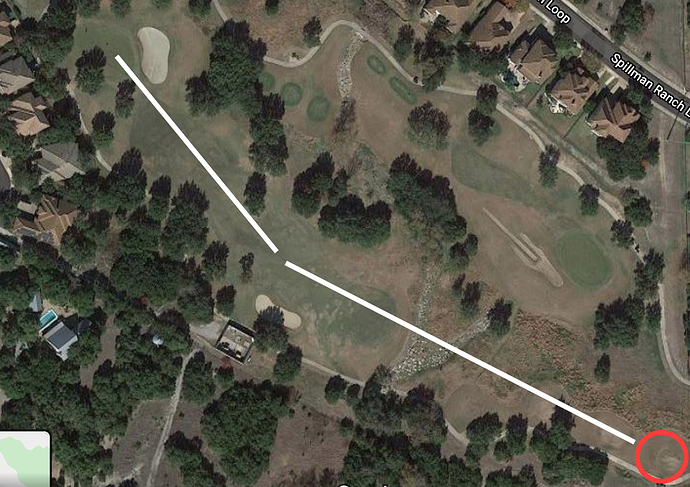 This one for me. Whitestone #12 in Benbrook/Fort Worth, Texas. Maybe it’s been a while and they’ve filled it in, but it’s a 478 yard straight away par 4 with absolutely no design to it, dead straight, with just a dumb ditch/creek about 285 yards off the tee with a fairway with a lot of roll in it. You just hit driver and hope that your ball bounds through the ditch (which is hopefully dry) or that it’s playable if it goes in, or it’s not rolling and ends up short. Or you hit a hybrid and have 250 into the green. To me, the worst design is when the hole is made difficult “just because”. Like a dumb ditch that forces you to layup. 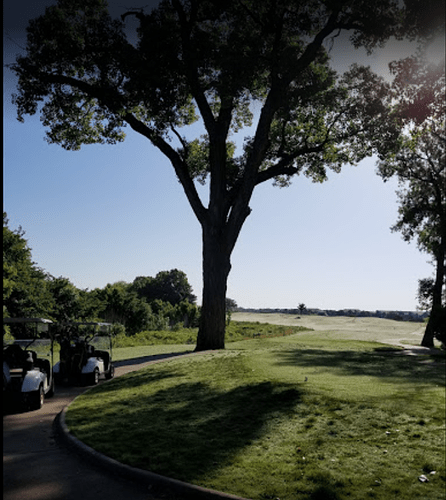 This also makes my list. #7 at Riverside in Grand Prairie, TX. We played this in our state tournament. It’s 434 yards and this is a picture of the tee box. That tree on the left? The branch overhanging was literally in play. (maybe the back tees are where the picture was or it was a long time ago and they fixed the tree?). It was about a 220 yard carry to get it to the fairway and you literally have to hit it low to avoid the overhanging tree right on the stupid tee box but high enough to carry 220 yards of death.

No one wants to tank their entire round for one dumb shot, so most everyone was aiming 80 yards right into the adjacent fairway and just playing it like a par 5 essentially. Another fun feature of this dumb hole is if you miss left you can often find your ball and maybe play it, but maybe not, leading to a Kevin Na type situation where he made a 19 because he had nowhere to take relief from after trying to play his first one from a thicket/forest.

Another course full of dumb gimmicks in the area was Canyon West in Weatherford, TX. Lots of fake wagons off the tee box, a Texas shaped green, a snake bunker…silliness. They also liked to just draw out of bounds lines 25 yards into the rough on lots of holes for random hardness. I don’t totally hate the course or anything and some of that obviously isn’t the designer’s fault, but it definitely doesn’t make you feel warm inside playing it.

a 478 yard straight away par 4 with absolutely no design to it, dead straight 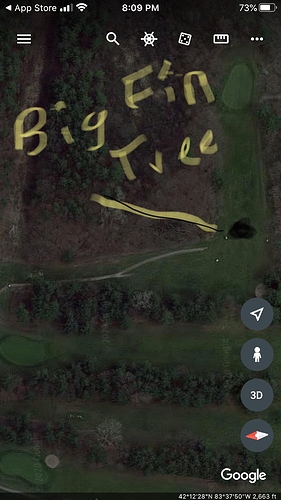 image1125×2001 389 KB
Hole #16 at Pineview Golf Course in Ypsilanti MI. This hole really caught my ire two years ago when I snuck out for early rounds after my son was born. The hole is about 333 yards long, and takes a 90 degree turn around 160 yards from the tee box. The problem is the tall, full tree in the middle of the fairway on the OTHER side of the dog leg. Tall mature trees line the inside of the dogleg, making it impossible to hit over the dogleg without a towering tee shot and a lot of luck. The only other way to take the tree out of play is to hit a 5 yard gap on the left side of the fairway, or hit an 8-10 yard gap on the far right end of the fairway (hitting it thru the fairway is 100% dead). Most of the time you’re either dead behind the tree, or you have to hit a 160 yard stinger that doesn’t get more than 6-10 feet off the ground. A good look at birdie requires far more luck than skill.
14 Likes
ANTIFAldo March 20, 2020, 12:41am #1116

It warms my goddamned heart to see people create Refuge accounts and have their first post be a submission in this blessed and cursed thread.

Guilty as charged. Sadly this course has between 1-3 other holes I could add to this list, but none are nearly as egregious as this one. Sadly it’s only about a mile or so from my house, so I bite the bullet more often than I should.

image320×650 127 KB
5th hole at Apple Mountain in Camino, CA is a 571 yard par 5 from the back tees. It is a true 3 shot par unless you’re Bubba Watson & can hit a mega slice off the tee with a mega draw into the green. You have to hit at least a 6-7 iron to reach the fairway but if you’re too far back you’re blocked out by tall trees & have to hit a mega draw that slices again to keep in the fairway. If you go too far you have to hit a mega slice for your layup to keep it in the fairway. I usually hit a 5 iron but I have a hard time hitting a iron straight/drawing it so it’s really hard for me to keep it in the fairway without hugging the trees on the left. I could hit a 3 wood through the fairway if I wanted too. You miss just a few yards right of the fairway you’re in extremely thick grass/waste area & you’re probably got a lost ball. You miss left you’re in trees & there’s a mini creek down those trees. So if you perfectly place your tee shot you have to hit a soft fade for your layup, which is actually a shot I play really well & prefer. A short-mid iron usually is the difference between being about 150-100 yards into the green but with the way the fairway angles you have to place the ball perfectly in there especially if it’s hard out there. You miss right/short you’re on a huge slope where the ball is at your knees & if you miss left/long you’re in trees/thick grass. If you hit another perfectly placed shot you have a not as difficult third shot but with the way the green is sloped, back to front & with a big backstop in the middle of the green you have to be on the right level to have any shot at birdie. It is a good 1-2 club difference as the 3rd shot is uphill. This is the one hole on the golf course I have no recollection of making a birdie. It requires 2 perfectly placed shots just to really even have a decent shot at getting on the green in regulation.

This thread is everything I needed. I have a couple submissions when I get time!

To add to this, an approach shot with any spin will likely hit the false front that covers most of the front half of the green, causing it to come back down the fairway 30 yards, and any back pin is surrounded on 3 sides (barring the front) by trees.