Who Wants to be a Millionaire: @BigTimePolecat to rep Duck Club, LIVE

lol - you’re trying to use math to prove that math doesn’t work?

I said I would shut up now so I will.

Live your life, golf your ball, have fun. (but keeping a GHIN would be a good idea too, or not, you do you)

I have the sudden urge to put this on wood and hang it in my living room… is this the golfer’s version of “Live Laugh Love”?

it was a good piece. But the example more accurately implies that a 20-24 handicapper can’t play 18 holes in a row without an 8 or a 9. See, that’s the thing about this whole argument. TaylorDa isn’t a bad guy, and he’s not a cheat. But he’s about a 12-15 handicap, MAX.

You’re defending TaylorDa, the man, who likely deserves the defense. His knowledge of the handicapping system, and his game itself, is already convicted and sentenced. There is no dispute here.

I think the variability that happens in golf scares people. We deal with this fear by assigning handicaps so we can create safe little boxes to live in. @Taylorda just exposed that fear in all of us. You’ll see it when a 10 handicap shoots a 50 on the front and starts sweating the back. You’ll see some quick rakes, a couple strategic mulligans, etc. Yeah buddy - a 10 can damn sure shoot over 100 and break the paradigm. I don’t believe anyone who is over a 5 always scores within a 5 stroke range if they are playing by the rules.

Handicaps are not static. If he was a 20 when he stood on the first tee and proceeded to hit 8/9 greens, maybe he’s just not a 20 after that day. Both things can be true. Who are all these people that were born with handicaps that dictate what they are allowed to score?

handicaps that dictate what they are allowed to score

yes. Within this calendar year I have shot a 12.4 diff and a -2.4 diff. my action defines my handicap and variability index, not the other way around.

You cant technically bust the handicap bell curve because all it is a is a measure of a small sample size of reality…when the reality changes the bell curve shifts.

and at the time of my -2.4 diff I was a 6…so that seems pretty improbable. if there was money on the line I likely would have been knee-capped by @Lazstradamus

I likely would have been knee-capped by @Lazstradamus

I think the course ratings courses are given don’t have enough dispersion in them. They are all too similar in my opinion.

These days with all the data out there, they should be able to actually calculate this stuff and not use some arbitrary system based on yardage and perceived difficulty of hazards. It’s time to use some actual math from actual scores people.

The course rating of a particular course is a number generally between 67 and 77 that is used to estimate the average “good score” by a scratch golfer on that course. - Wikipedia

It is expressed as strokes taken to one decimal place, and is based on yardage and other obstacles to the extent that they affect the scoring ability of a scratch golfer. Course Rating is equivalent to the better half average of a scratch golfer’s scores under normal playing conditions. - USGA

Preach son. be the change you want to see @VelvetSteve. Go make it happen, we got you.

According to the USGA, a golfer at the midrange of @Taylorda’s claimed handicap shooting an 81 at [redacted] is 130:1. (It should be noted that 9-hole scores are acceptable to be input for handicap purposes, and the odds against his 34 are off the charts for such a player.) The very next day at Bali Hai, he shot a 94 from the golds. The USGA puts those odds at 23:1 against. When you do the multiplication, as @anon26814599 can confirm, the odds of a 20+ handicap player shooting those scores consecutively are are more than 1 trillion:1 against. 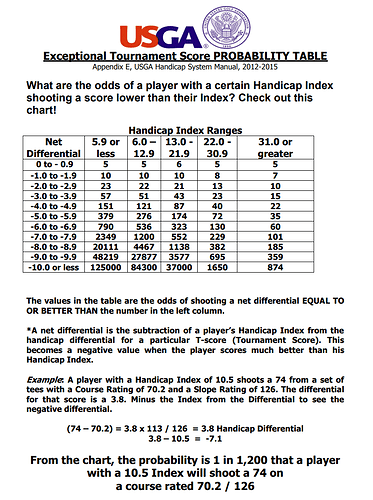 Guise, sorry to interrupt here but just dropping in to say that I woke up from a dream at 5:30 this morning in which I was brainstorming and drafting an email to @Lazstradamus with ideas for WWTBAM questions (and then kept thinking of questions once awake)…

my goodness. That is a GD mic drop

fundamental right of every golfer to go low

Going low, in this case, being the equivalent of my sons paper airplane reaching the moon.

Why is this course so super secret? Is the Buck Club open and located in Vegas?

I fundamentally disagree with this chart on the basis that it used VERY large brush strokes.

A 6 and a 12.9 are very different golfers and yet their probability of shooting -7.1 diff in this example is the same.

The general variability of scores for a 12.9 is much higher than a 6. comparing apples to avocados. imagine that, the USGA screwing things up again.

There are a lot of different kinds of 6 handicaps though too.

Now, I don’t recall what my 9 hole splits were, or how many greens I hit. And I have no idea what my handicap would have been at that point in time. I was young and improving and had a round where things came together. This happens.

Taylorda overestimated his handicap then had a career day.

can confirm, the odds of a 20+ handicap player shooting those scores consecutively are are more than 1 trillion:1 against.

again, like coin flips, the one score is not dependent on the other and just because they occur consecutively, creating the appearance of low probability does not, mean it is less likely to happen