Where did you play this week?

@desertduffer played really well today on all the par 5s and par 3s. Fun to watch. 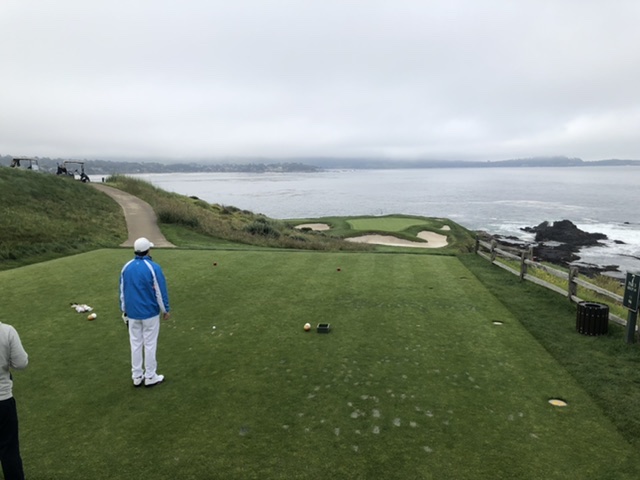 On the green at 7. 4 birdie putts. I made the long one

this is @desertduffer’ s attempt. 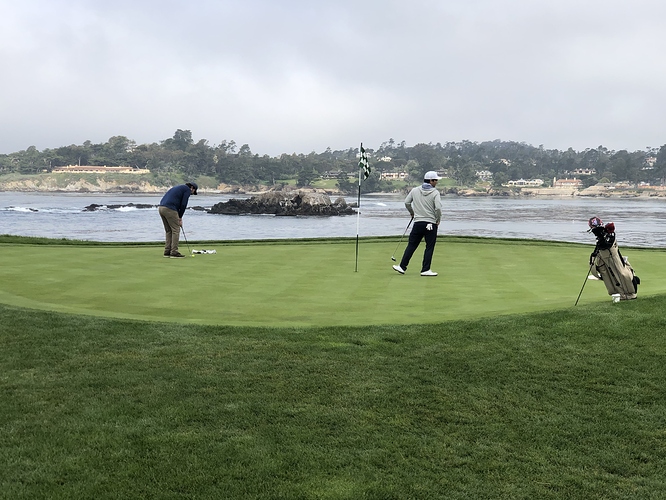 Looking at approach on 8. 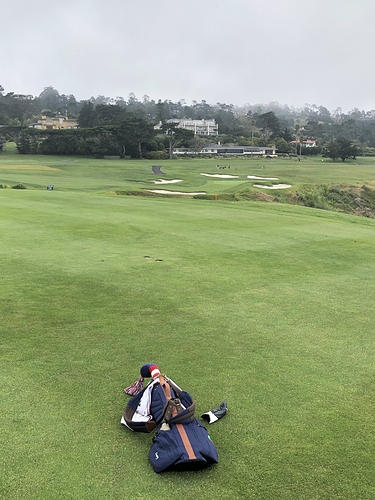 @leric90 teeing off on 18. @desertduffer and Tommy from Stonebrae observing social distancing. This tee shot ended up under the tree. 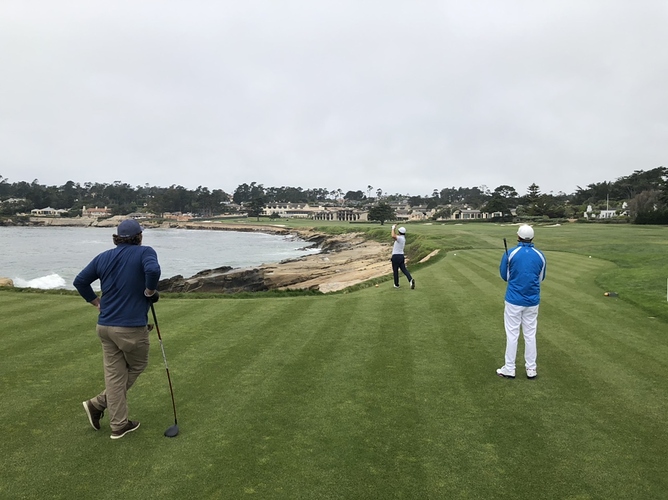 The COVID muscle tone is strong to very strong in that pic of me on 18 @desertduffer. Showing the effects of Wine, whiskey, beer, tequila enthusiasm (thanks @Hala-Mark-Rey).

Edit: it’s a great pic. At least I like my position here.

Well I didn’t get to play Pebble today, but Houston was blessed with some amazing weather. High of 73- probably the last hurrah before summer is here for good.

Drove an hour south of Houston to play The Wilderness Golf Club in Lake Jackson. This course is always in great shape and is the best public course for your money in the area. Definitely put it on your list!

Shot an 82 with no doubles…which is my 2nd in last 3 rounds where I accomplished that. I had three 3-putts for bogeys that really stung. 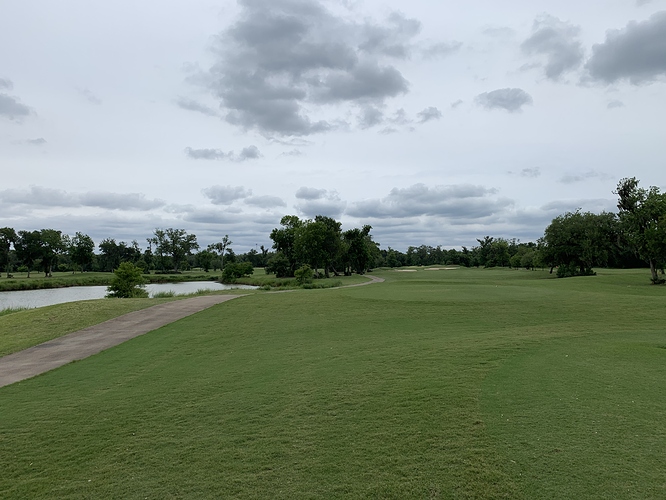 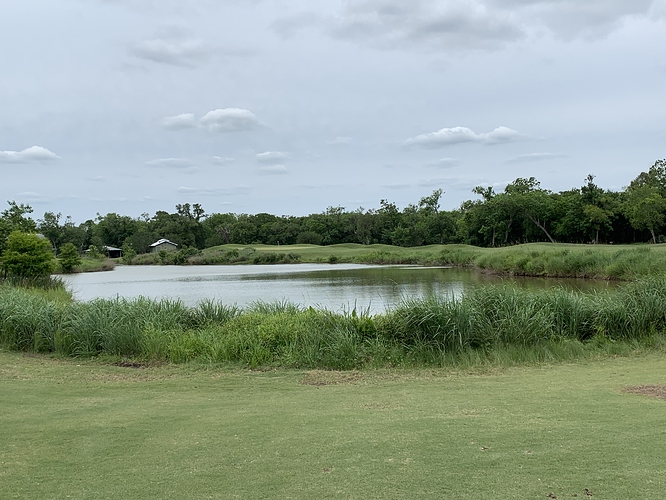 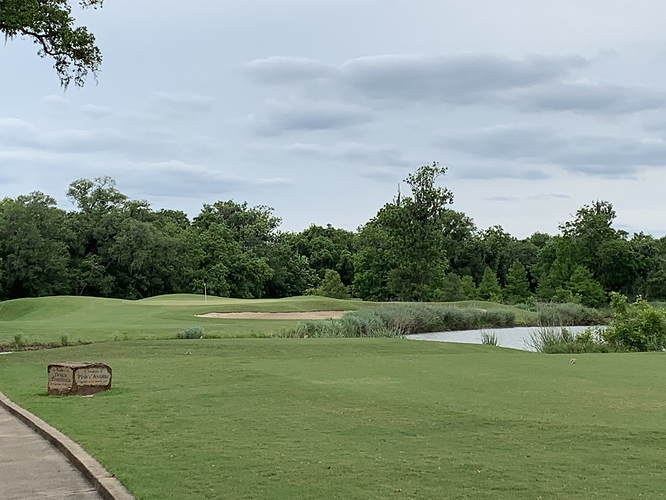 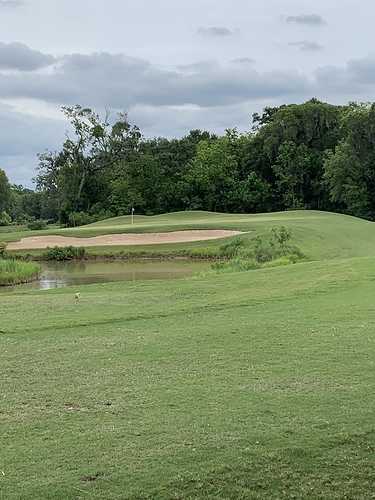 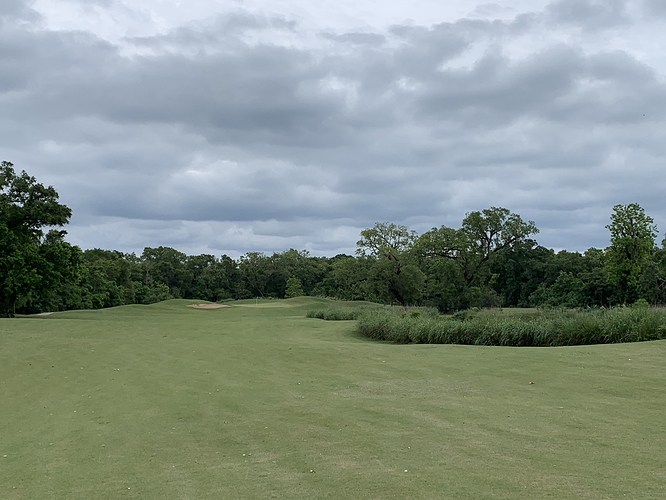 Played my home course (Cordova Bay) in Victoria, BC for the first time in about 6 weeks today.

Conditions are always great there, but with a month plus of prime growing conditions without any play, it was in exceptional shape. Also, the COVID-19 protocols in place were sensible and made for a very enjoyable experience.

Sadly, my game was not in great shape. 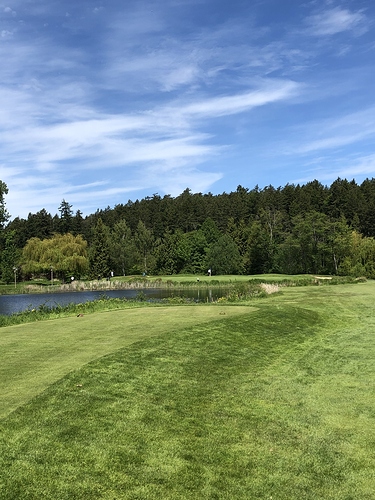 I had an epic day today with the Carolinas RACDG crew.

11 of us teed off at Southern Pines Golf Club this morning 8 of us had an encore at Tobacco Road.

Was an amazing day weather wise, a cold spell had temps around 60 with a cool breeze. Not a cloud in the sky.

Both courses are in great shape, TR had some spots aerated (mainly in the fairways), but it didn’t affect play at all.

Just a perfect day to play golf and enjoy some amazing courses with great company.

Started off slow at SPGC, better back nine, struggled in with a 92. Putting was brutal.
Tobacco Road was Tobacco Road. Putted a little better, chipped in from 10 yards off the green for birdie. 88.

I’ll let the other guys post pics, didn’t take any.

Is that any good. Southern pines is perfect right now for $29. 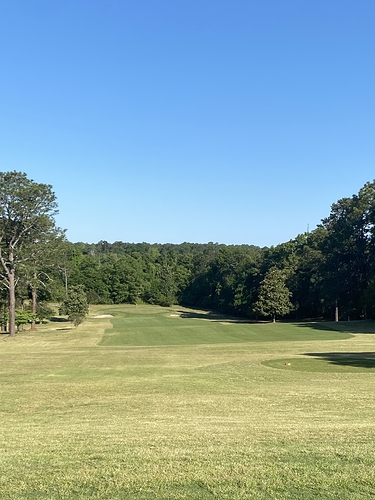 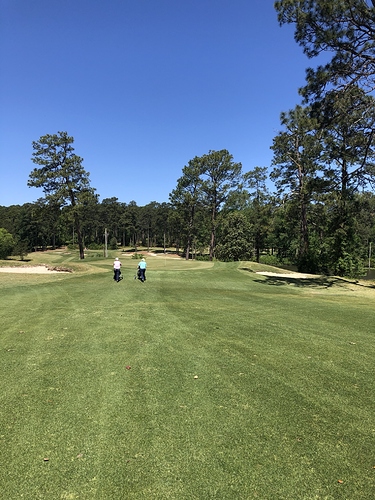 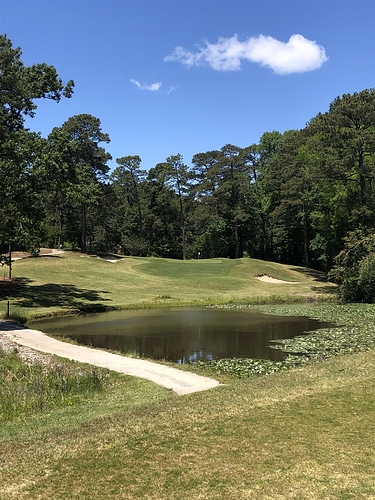 Only got to join for the Southern Pines portion of the journey. @Are_you_double_D and @rkris were decent company at best

SP is awesome and wish I lived close by. Could play it every day. As Sugarloaf said, a dive bar amongst Michelin stars - but it’s a dive bar that serves the best wings and coldest beer in town. 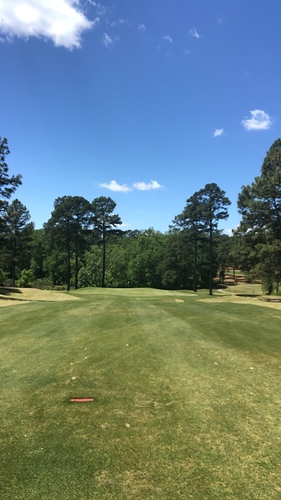 Great walk today. For sure getting in more rounds at SPGC before they punch.

@raleighdawg: see, that just reminds me that the best dive bar and wings are within a mile of SPGC at Legends. You gotta come down post-Covid for a round and a stop there after.

Played my first round at home (Broadmoor, the local muni) since, I believe, early September (one Palm Springs round in November was the last time I’d made a full swing. After 3-4 weeks of above seasonal temperatures, today felt frigid (max 9 Celsius) with a pretty steady 10-15 mph wind.

No photos because my fingers weren’t really working. The front nine was rough, especially the short game costing strokes, but 15 putts and 3 birdies on the back made things feel better. Felt great to be back out.

One story: there was me, another single who was walking (bad call on my part - I thought carts were mandatory), and a couple in their 70s who also work there as starters/marshals. The sixth hole was closed today (there’s a bye hole that was in play on the back nine). The walk from 5 green to 7 tee is close to 500m so, thinking it would still count as social distancing, I invited Simon to jump on the back of the cart to give him a lift. Well, the other two were riding in front and when they turned their cart around and saw him on the back they both nearly had a seizure. I guess they’d been read the riot act regarding ensuring everyone kept 6 feet apart, etc. and how if we got caught we’d be escorted off and likely banned for the year. I assured them I understood and had learned my lesson and they were great for the rest of the round (she encouraged me at least three times to sign up for the men’s league), but I’m about 40% sure they will look me up and added to a watch list of some sort.

It would normally be a 6 hour drive but since I was working all week just an hour away I pranced my way up to The Wilderness Club in Eureka, Montana this morning.

Ranked the #1 course in Montana by a few lists - I think it lived up to the hype for me. As far as I know its the first Faldo course I’ve played and I thought it was a very strong design. Still early season so the greens were slightly spongy and slow but I loved the greens overall.

Course demands to be played more than once as there is a lot of visual trickery that only becomes obvious after you get closer.

For the amount of greenside bunkers and waste areas and the fact that I hit poorly off the tee most of the day, somehow I didn’t end up hitting a single sand shot.
Course is about 5 miles from Canada in Northwest Montana - got some pics but I don’t think they do a ton of justice for how gorgeous it was! 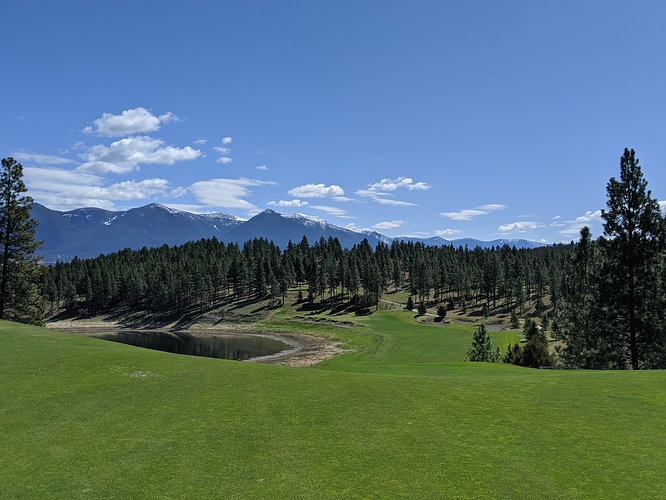 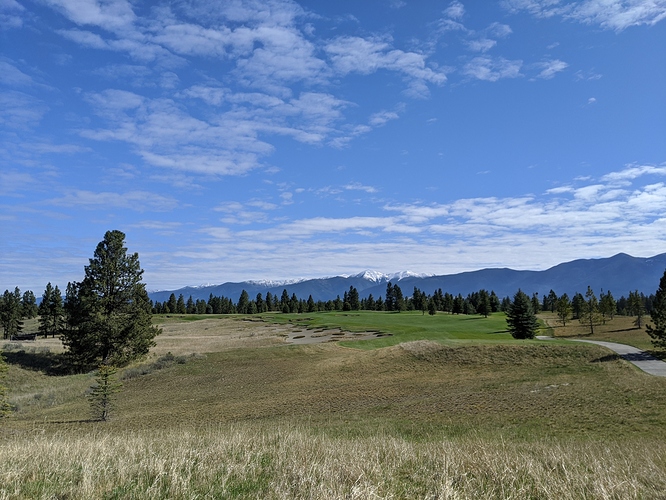 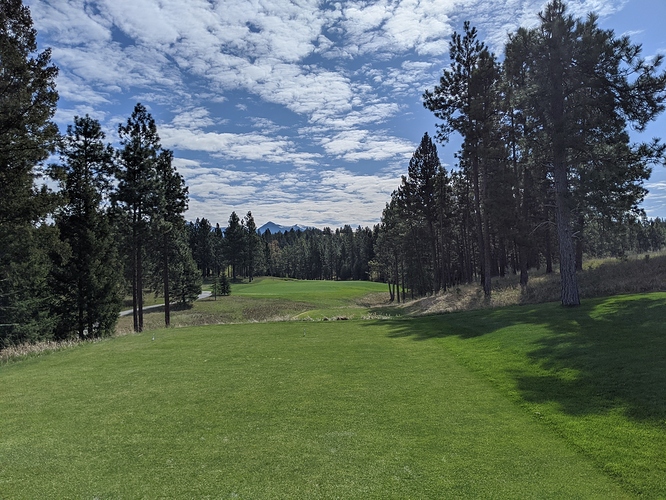 I have to mute this thread. You people are sick. 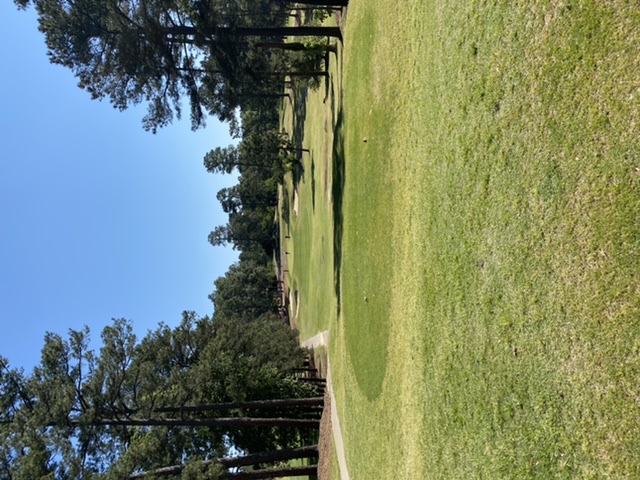 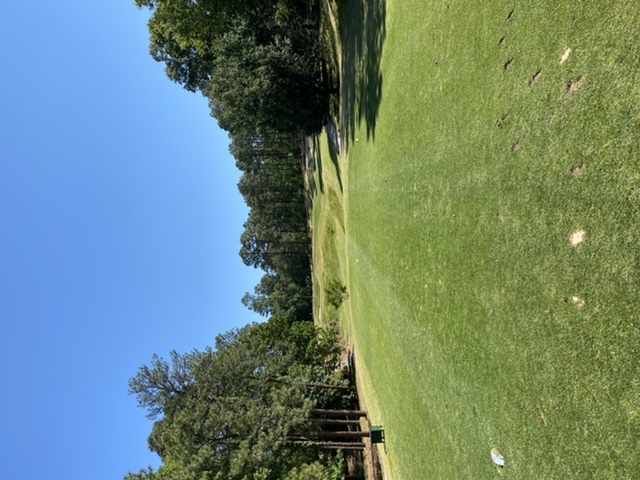 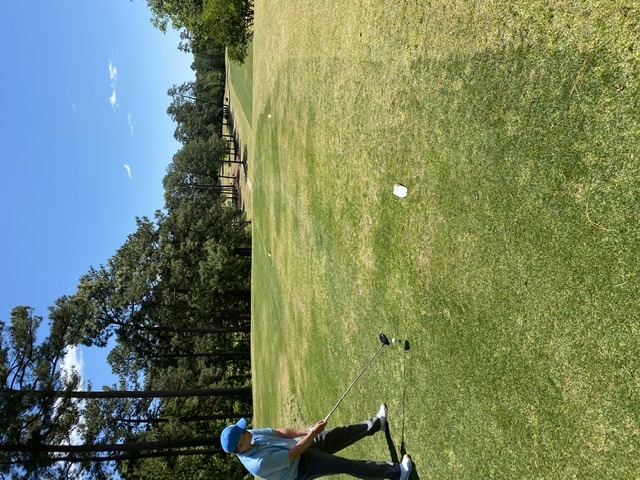 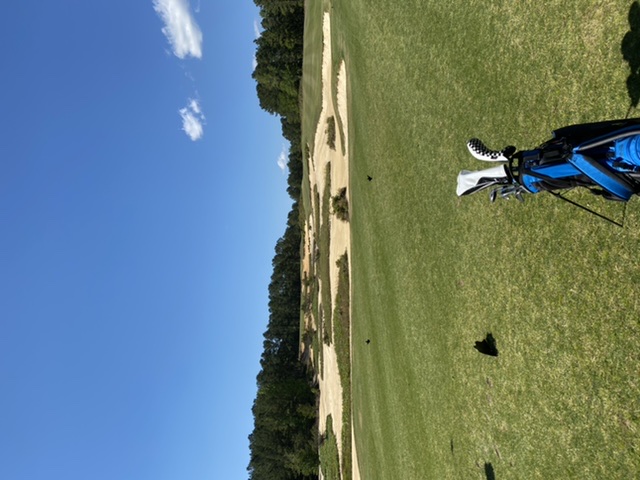 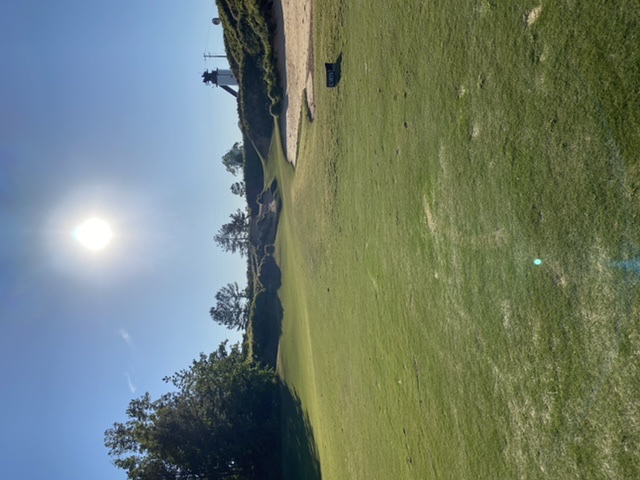 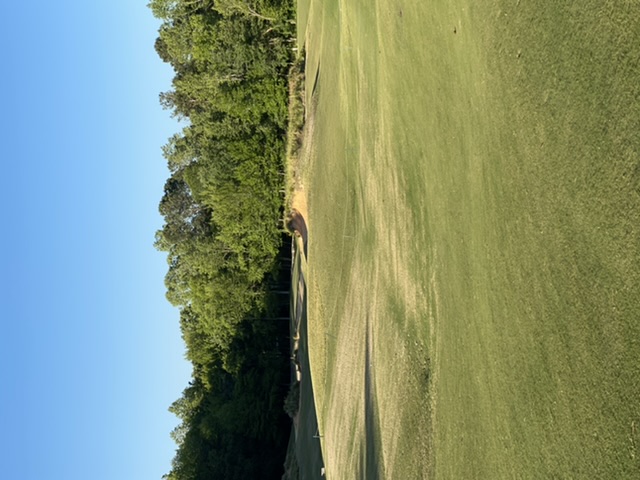 You ask for pics, you get pics…way more where these come from but this looks like a solid sampling for one post.

Great day and great company at Southern Pines/Tobacco Road. I feel like I am showing some flashes of better play and TR was even more impressive than I remembered. The only other time I’d played it, we skipped 15-16 and those holes are both pretty wild, even for TR. I still don’t believe there is a fairway on 16.

Trying to look at these pics:

I am writing not to say how my round went (poorly, if you may ask) but to tell a story about what happened during my round. At my club, there is a guy named Craig who hovers right around scratch. He’s a former D1 golfer. He’s also left handed. And every time I play with him, something awesome seems to happen. Two weeks ago, he and I played in the rain, and he managed to shoot a 3 under 67.

At our club, #3 is an over-the-water, uphill and a little right par 3. It’s a lefty draw shape. But if you draw it too much, you end up right in the shit, with a pretty sloped drop off to the right of the green. Anyways, today the hole was playing right around 180 yards. Craig gets ready to step to the tee. He says, “I should just ace this so we can all just drink.” He’s been sober for idk how long. Then he says, “Me, powerades, of course.”

So Craig steps up and hits this perfect draw that lands left of the pin. It looks pretty good, but from where the tee box sits, we can’t see it. Me and the other guy playing from that box tee off and miss the green.

Then Craig’s son tees it up from the gold tees. He hits a great shot that hits the green and looks like it’s on a really good line to the pin. So now there are two suspects.

The other guy and I are in separate carts leading the charge. As we crest the hill, he and I realize at the same time: there’s only one ball on the green. He turns around and gives me a look. We immediately yell to Craig and his son that there’s only 1 ball on the green. So Craig’s son hops out of their cart and sprints to the cup.

Sure enough, there’s a ball in there. The son pulls the ball out of the cup and says, “Titleist 3… that’s me. Wait, no … that’s YOU, dad!” So of course we all erupt. Luckily the 4th hole heads back to the clubhouse and we were able to get some beverages. And some powerades.

Turns out that was Craig’s fifth hole-in one.

I thought this was going to end with both of them aceing the hole.

A father/son in my hometown both aced the same hole in the same day separated by one group during the club championship. 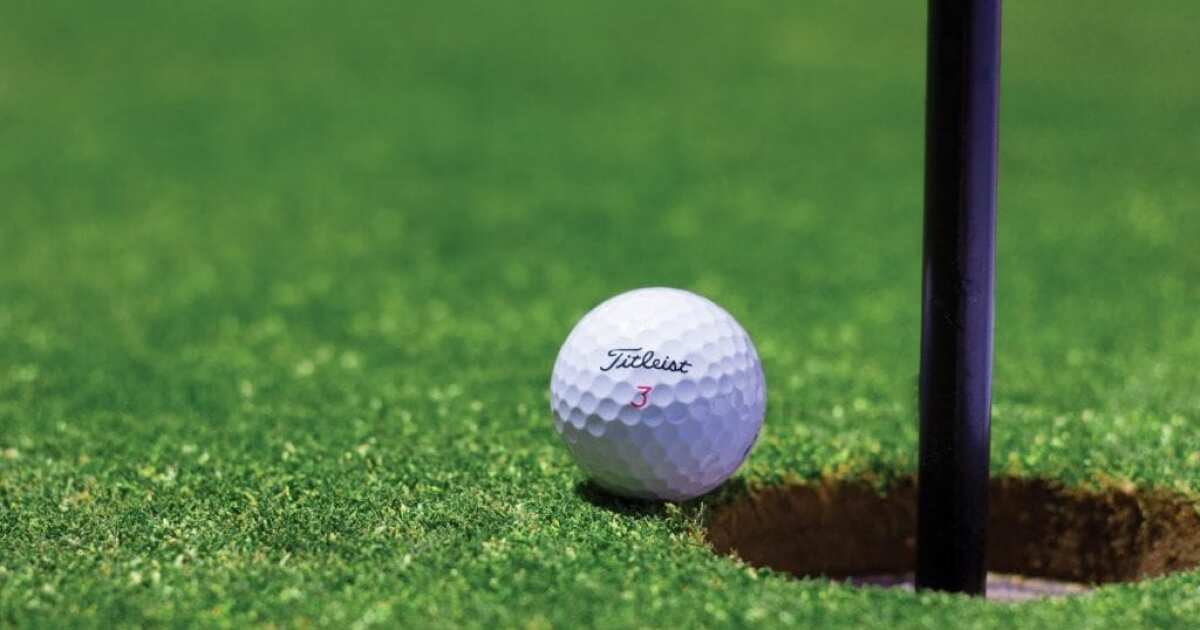 LEWISTOWN – Of all the hole-in-one stories out there, this one would be tough to believe if there weren’t witnesses. “I hit a seven iron and hate to admit it, but I bladed it like I usually do,” said Lewistown’s Jim Rutherford, talking about his tee...

The hole they aced has one of the hardest greens I’ve ever played. Severely sloped back to front. When it’s firm a downhill putt with an extra 6inches of pace that doesn’t drop will roll 40 feet off the green. It’s like the whole green is a false front.