Where are my "Mid-South" Refugees?

In checking out the event lineup for next year here, there is a major lack of easily driveable events for us Kentucky, Tennessee, Southern Ohio and Indiana, Tennessee, Alabama, Georgia, etc.

This is not on the NLU guys, as most of the lineup is made up of events organized by others. Any other guys around that would be interested in trying to run something for next year? Not sure what the best location would be for something like that? I am surprised we don’t see anything lined up for Sweetens with the connection there but I’m sure their demand makes it tough to find a date. Below is the map just for reference of the hole in the center of the US east of the Mississippi. 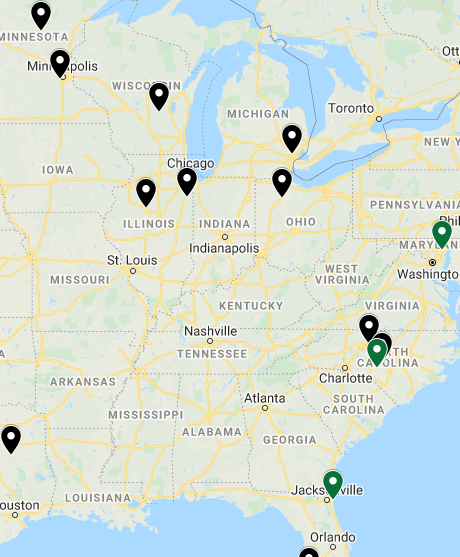 Just a few days ago Sweetens sold out every weekend for the season in ~30 minutes…absolutely wild, but awesome

Nothing on the calendar but we did just have the Mistletoe Masters in Atlanta in December and the Big Cedar Missouri Event in October.

Would LOVE a Memphis event.

Last year there were two events in Southern Ohio (Altamont at Avon and Denison Derby) and 2021 has a central Indiana event. Keep in mind it is checks calendar the second day of February, the 2021 calendar is not set in stone.

If you want an event to happen near you, I suggest getting involved with your local Roll Call and making it happen.

is Southern Ohio in The South?

Absolutely not. I do not appreciate the sentiment but geography is a liar sometimes.

@LeftHandLow - where are you located?

You mentioned Tennessee twice in the OP, so I’m guessing… Nashville?

I believe the Overton Park reno is scheduled to be done in September. Cant wait to see what the King-Collins Design turns into. Also great opportunity for a charity aspect with St. Jude being here

If anyone wants to plan an event in the Mid South, please DM me so we can get the process started. It’s an area I’d love to see an event or two pop up in.

@WestOfDestiny had a great suggestion in the Strapped Location: Suggestions topic that would fit this bill nicely: https://refuge.nolayingup.com/t/strapped-location-suggestion/18039/218?u=theredmenace
I probably can’t organize from where I am in Maryland but as a Kentucky native I would fer shurr be interested in some bourbon trail + golf action.

We have tossed the idea around in the Bourbon Society, would love to make that happen.

There used to be a guy on here that liked to plan events that was located in Tennessee, what happened to him?

am surprised we don’t see anything lined up for Sweetens

Why would anyone want to plan something other than a good old fashioned brush fire at this place?

There is an event at west Lafayette, IN in June, however it is not on the nlu list. It is in the message boards. I think it is called the Hoosier hootenany(sp?). I’m in North alabama so I am game for another event in the south.

It’s not and it’s why it’s in quotes. However Cincy, Evansville, and the like are somewhat accessible to those in the gap area shown on the map, which is why I included them.

Nope. I’m in a suburb of Louisville. Tennessee is obviously pretty accessible to me and Tennessee is connected to a lot of the states that are missing events is why it was mentioned.

Evansville? I will attend a refuge event at Victoria national.