What was your favorite course you played in 2017 and why?

In response to our discussion on podcast episode 112, we want to hear what your favorite course of 2017 was and why.

My answer on the podcast was Tara Iti. It was hard to name just one course after the most ridiculous year of golf in my life, and I’m hoping that’s not recency bias in saying that. But it was just an incredible combination of vibe, setting, intrigue, challenge, and fun.

I can’t stop thinking about it. I’ve gone through the drone footage at least two dozen times. It’s the most fun I’ve ever had actually doing a writeup. They got every single detail right when it comes to the amenities and the experience, and the golf course is just magnificent. I keep replaying some of the ridiculous lines I had to take on approach shots, in order to use the contours of the fairways and greens to get down to the pins. I can’t praise this place high enough.

The only other course that came close was The Old Course. It was not my first time playing it this year, but it was the first time that I got it. I can’t pretend to know every nuance, but I at least got a glimpse into the intricacies that make this place so fascinating.

Others in consideration were Royal Melbourne, Royal Dornoch, Royal County Down, and Royal Portrush.

I mentioned it on the podcast, but my favorite course of 2017 was The Old Course. I’ve never had more fun hitting it in so many bad spots.

A few random honorable mentions and biggest surprises from 2017:

Guess what I didn’t mention it on the podcast, because I wasn’t invited to be on the podcast, but my favorite course of the year was Monterrey Pennisula Country Club Shore Course. Alan Shipnuck and I had an epic match on a cloudless day in Monterrey. After a weekend following The Pied Piper of Seagulls around 17 mile drive, MPCC was an unbelievable escape. It uses the ocean well, gives you all kinds of different wind directions, and is in awesome shape.

Toss up between Crystal Downs and Sand Hills.

What was everyone’s most offensive course?

Mine was a place called The Legend of Brandybrook in Wisconsin. Violated all the simple principles of quality architecture. I have now played it 5 times for qualifiers and each time it has gotten worse. 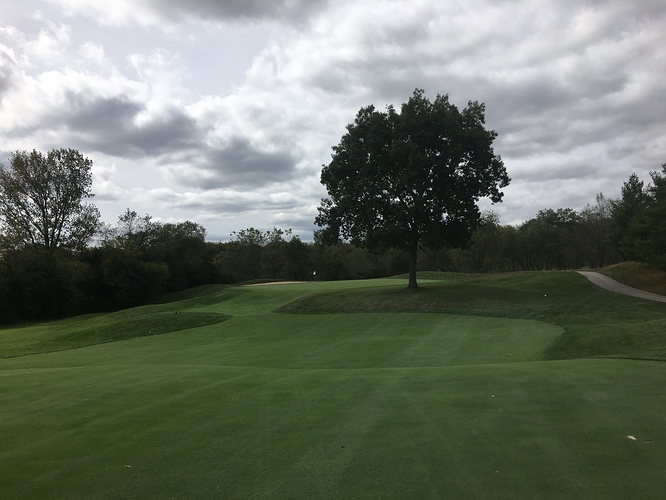 The name alone is extremely offensive… not good

What was everyone’s most offensive course?

Mine was a place called The Legend of Brandybrook in Wisconsin. Violated all the simple principles of quality architecture. I have now played it 5 times for qualifiers and each time it has gotten worse.

Strike 2 Andy. Start a new topic. I remember my first message board.

I don’t know how message board etiquette, I am like a 30 handicap in jorts.

My favorite course of 2017 was the Culver Academies course DJ mentioned above. Through circumstances much more fortunate than I deserve (on multiple levels), I live there now.

I hadn’t played it until last spring, but it’s hard to imagine a more enjoyable backyard to have. For a nine-hole course, it has a lot of variety; there are three par 3s, three par 4s, and three par 5s, all routed around a lakeside landscape with more elevation change than I knew was possible in northern Indiana, and I’m from here.

Everyone I brought here has loved it, and all immediately wanted to go around again. The course essentially has two loops within it; 1-4 and 5-9 both start at and return to the golf house, adding to the variability. There are also three sets of tees, meaning it’s only a nine-hole course if you don’t have any imagination.

Culver is fun for all skill levels; some lines of play are only available for the long hitter, but those are always mitigated by hazards that only come into play on those lines; shorter players can still take advantage of certain angles and lines that keep them in the hole, although that generally means a lengthy approach from a less appealing angle. It’s like you’re playing chess against the course, but it’s not an unfair fight.

For example, the course utilizes blind shots, generally to great effect. The picture below is the result of an unintentionally laid-back tee shot on 9. Had it not been windy that day, it may have ended up down in the valley, leaving a much shorter approach on the par 5, but it turns it into a completely blind affair, and you’ll almost never have an even lie. Some of the lies at Culver can actually be quite severe, another natural defense. Lay back (or just be a shorter hitter) and you’ll have a flat lie with a perfect view of your target area, but it’s a long way home with plenty of trouble. It’s risk/reward golf without the need for artificial protection.

It’s different than any course I grew up playing, and it was eye-opening for me when I realized that’s because of the restoration; increasing the size of the greens and fairways (they’re massive), removing trees, and more. It felt like a trip to the future of golf course design, when it was actually a return to the original layout, from almost 100 years ago. You’ll hit shots here you won’t find many other places, and even after all the golf I played, I was still finding myself in new and different spots at the end of the year.

(It’s also a hell of a workout to walk it, as I discovered once golf season ended and I started adding pounds back on.) And though I can’t make any promises, if anyone reading this is ever (for some reason) in north central Indiana, feel free to PM me, and I’ll try to get us out there.

Maximum jealousy with regard to Tara Iti. I think we need some in depth discussion around that. Would love a separate thread detailing your experience there.

Tough question Soly and I don’t think I have a clear number one but some clear standouts in no particular order were:

Both rounds were played on picture perfect days and the course conditions were both in fantastic shape but I have to go with Chicago Golf at the end of the day. Teed off just after 1 in the fall with little wind and highs in the mid 60’s. I was lucky enough to be invited by a board member at the job I work who happens to be the clubs historian. He previously warned myself and my two co-workers that he would be pointing out all the history that Chicago Golf has and I mentioned to him that if he isn’t talking in our back swings, he isn’t talking enough. Our host also gave us a tour of the property before the round.

Chicago Golf was playing fast and firm and I loved every second of it. I have been fortunate enough to play Chicago Golf a few times previously but both were in soft conditions. The hole locations were in the toughest parts of the greens and you really had to be on top of your game to stand a chance. There were several instances where you really needed to be in the correct side of the fairway and playing from the wrong side of the fairway meant a good shot would be 30-45 feet from the hole.

After the round, we grabbed a beer with our host and went outside to watch the last few groups finish up on 18. It was by far one of the most peaceful rounds I have played in years and score didn’t really matter to me that day. I wanted to soak in as much of Chicago Golf as possible and the car ride home was the most relaxed I have ever felt in a car before.

Got a couple posts on it coming shortly. And will be heavily, heavily detailed in the travel series.

Tara Iti for all the reasons above. It is heavenly. I often dream of winning the lottery and founding my own Club / course. Tara Iti is the nearest thing to my dream that I’ve seen. The location, vibe, and course are perfect. Doak’s work on the layout is exceptional. Width galore, such cool greens, fescue surfaces, and great hazard construction and positioning. Tara Iti has it all.

My favorite course was Kingsley Club in Northern Michigan because it was the most fun I had getting to think about and try to execute different shots. Also the ground game and decision-making were very much in play, which I love.

Balllybunion. 30+ mph winds and rock hard greens made for impossible conditions, but it’s just such a fun course. 16,17,18 are such an absurdly good finishing stretch.

Leopard Creek in South Africa. One min your playing golf and a hippo is making noise while you’re trying to hole out for eagle!

After the Keith Foster restoration, the place is brimming with awesome architecture. got to 18 wanting to just keep playing

When you played Sandhills, did you make your way to Dismal or Prairie Club?

I’m from that part of the world and have been a bit surprised to not hear them mentioned if you are literally going to BFNowhere.