I was in Montego Bay last week and was able to sneak out to play a few times. Before the trip I was surprised not to find much on here; hope this helps anyone planning something in the future.

I played twice at the Half Moon golf course. Rate ~$160 + $40 forecaddy gratiuity. Pretty decent Robert Trent Jones Sr. layout. They’ve hosted mini-tour and Carribean events. The conditions were good, not great… above-average for a muni, not nearly well-groomed country club standards. They have a really nice range (with really shitty old yellow pinnacle balls) that’s free to use if you’re staying at Half Moon. I played a black/white combo of ~6800 yards. (somewhere between 75.1/131 & 72.1/129). The layout is fun and interesting enough, typical parkland style. Some good views but you’re not right on the ocean (like 1000 yards inland), and 5 holes border a pretty busy highway. The final 5 holes were brutal both days, long and dead into the wind. Best part of the experience was generally having the range & course to myself each time I visited (and the sub 2.5 hour round times). In total, wasn’t blown away but would return if vacationing nearby again. (related footnote, the restaurant adjacent to the clubhouse (‘The Sugar Mill’) was awesome and is apparently one of the best on the island.)

I played one round at Rose Hall’s ‘The White Witch’. White Witch is insane vacation golf. The views are unreal. You drive up a very steep mountain hillside to get to it, and play 18 holes with crazy elevation changes throughout. Rate was ~$130 + $50 forecaddy tip. Caddies here seemed a little bit more seasoned than the guys at Half Moon. The course is not walkable, would be borderline ‘impossible’/dangerous to traverse some of the terrain between holes without a cart. I played ~6700 yards, 74.0/139. Conditions were not great, but they had just redone some of the front nine greens, and it rained a lot the day I was there…but the views are so killer that they were an easy afterthought. A lot of blind uphill approach shots, tons of tough driving holes where missing the fairway and 5 yards of bordering rough is certain lost ball. I enjoyed the experience but would not want to play here everyday and have my teeth kicked in.

I was disappointed not to get out to the course adjacent to White Witch, Cinnamon Hill, which has less-difficult elevation changes and some cool points of interest (plantation ruins, some waterfall from a Bond movie, an old Johnny Cash home) but choose to do Half Moon a 2nd time in lieu of what was going to be a crowded day of teetimes at Cinnamon.

Similarly bailed on a longer drive to Tryall Club when the tee sheet wasn’t wide open.

In total, 3 rusty winter rounds at 2 beautiful courses, both worth hauling your clubs to if heading that way and hoping to sneak in some golf.

Playing white which in March. Thanks for the review!

Absolutely can confirm White Witch. Played back in November, similar with the not great green conditions, but totally worth it regardless. Amazing views and a really good time.

I’m going to Ocho Rios in April and plan to play Sandals Golf & Country Club a few times. I know nothing about it other than the pics online but it I’ll let ya know how it goes when I get back.

I’ve played that course (Sandals Ochi) several times. I take my own clubs and walk to keep the cost down to paying for the caddie and tipping the caddie afterwards. It’s not a great course but it’s not bad. Very small greens that will probably be the slowest you’ve ever putted. Conditioning is poor.

If you get on the first shuttle (7am) and hustle to pay and get moving, you can be done with 18 and back top the resort well before noon. If you dick around, you can get stuck trying to wade through the couples and beginners.

I played there last summer, I had a great time. Had a caddie that just watched me play a couple of holes then started handing me clubs. It was great. But the greens were really bad condition and very small. We basically had a two put limit in our group both days. We played in the morning both times and were back at the pool by lunch.

Thanks for the Montego Bay course info. We stay at the Sandals Montego Bay resort quite a bit but I’ve never played any of those courses. After reading up on the fees and thinking through the logistics of getting to and fro, I have always skipped it. At least now I know which one to settle on if I decide to play…thanks again.

Heading down here in December and staying at the Excellence resort for an anniversary trip. I’m thinking about trying out cinnamon hill. White witch sounds a little intense for a high capper like me, (plus my inner Bond geek can’t resist the chance to check out a filming spot lol).

Anyone made it out there? I’m especially interested to hear how the course (or others in the area) are holding up after COVID hit. I would think the lost tourist rounds would be a big hit to these places.

I’m going Dec 11th weekend, not sure if that’s before or after your arrival. This was a rescheduled trip from March still hoping to play some golf While I’m there

My wife and I went on our honeymoon a few weeks ago. White Witch is closed which was a bummer since it sounds pretty cool. If you’re not bringing your clubs be prepared to shell out quite a bit but I really enjoyed my round at Cinnamon Hill. Round, clubs, glove (remembered balls and tees but forgot glove, D’oh!) and caddie tip all-in was ~$230. Because of COVID they will let you out without a caddie but I encourage taking one. They will put the pressure on you to do so. I found out quickly that times are extremely tough there right now with the lack of tourism, far and away Jamaica’s largest industry. I had a couple very awkward interactions in situations I didn’t realize a tip was expected (first time at an all-inclusive in a foreign country). It was my first time using a caddie though and it was fun. Rode together in the cart but she stayed masked up. I don’t think I got any great insights but it did feel worthwhile to me to support someone during this time. The conditioning right now is so-so. Grasses a lot different than I’m used to but some really interesting holes and good views, both ocean side and up in the foothills. As long as you go into it knowing you’re pretty much overpaying for vacation golf you will enjoy it. To top it off for me I holed out from 100 yards for Eagle on the awesome super downhill 16th. First hole out of that length in a very long while! One positive is they’re taking safety during COVID very seriously there which you will see first hand at the airport. US customs was a complete breeze compared to the screening there. Enjoy yourself and stay safe.

PS - If you’re really open to ponying up the Robert Trent Jones designed Half Moon bay looked open and in better condition than Cinnamon Hill. 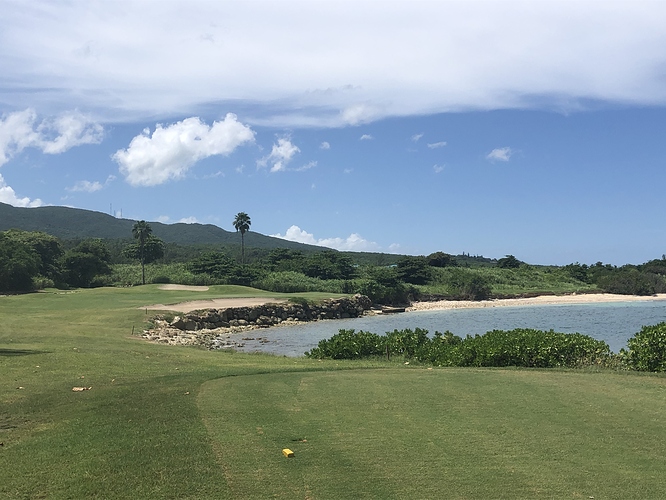 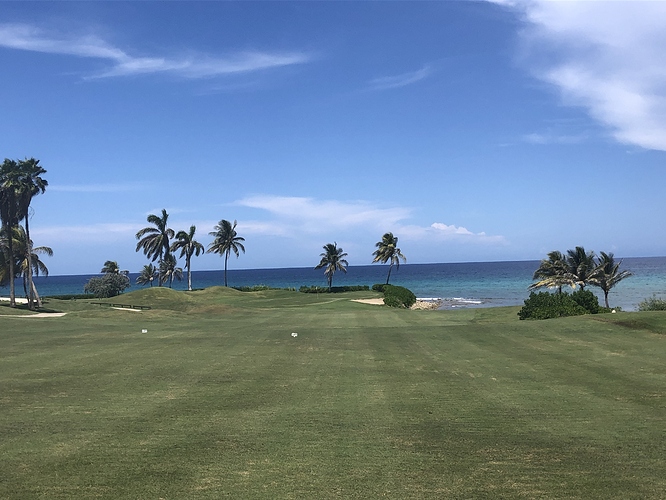 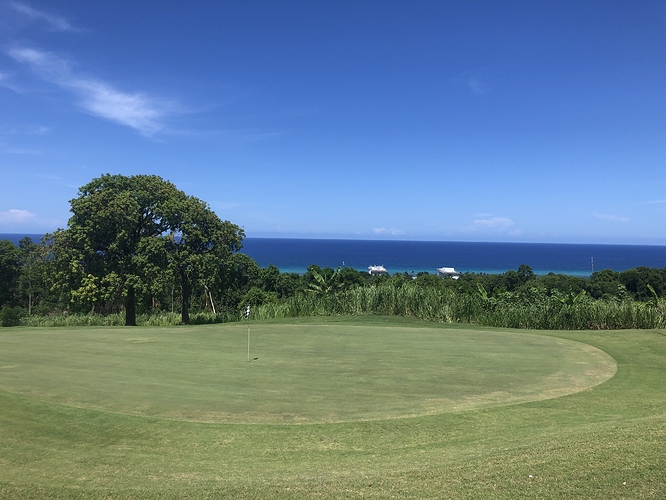 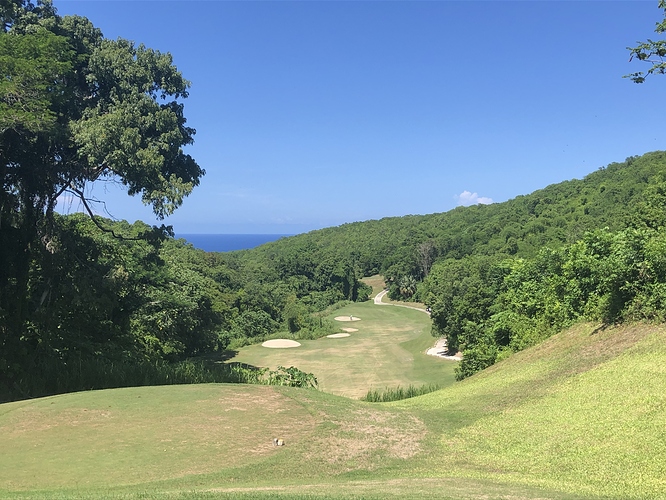 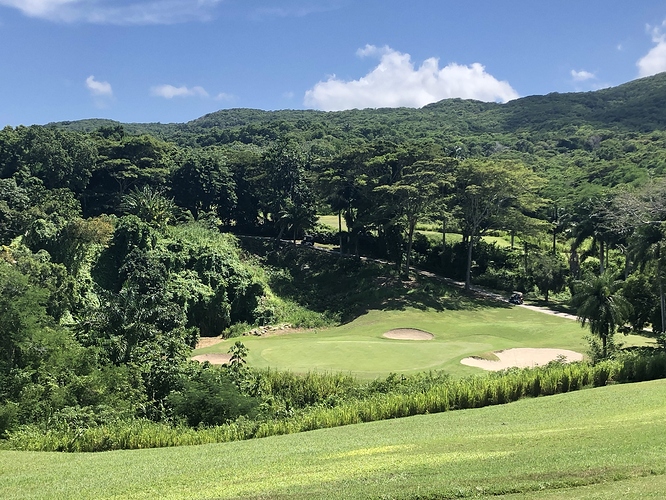 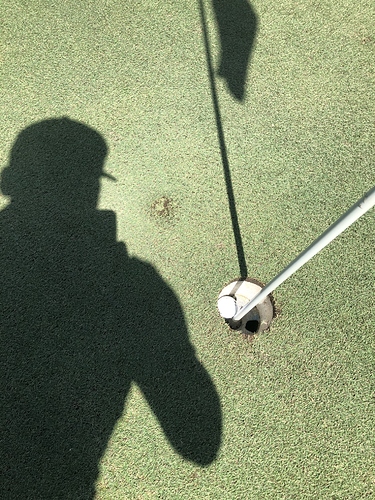 Yeah we’ll be arriving on the 12th, probably playing on the 14th and maybe playing a second round later.

Looks like a great way to spend a vacation day. I’ve never played with a caddie either but sounds like this will be as good a time as any to try.