So with the news coming out about the Big Cat / Phil match coming out and that they are talking to networks regarding coverage…With both players being miked, what network would be the best for this coverage? My gut tells me it will be a CBS production and shown on Shotime… 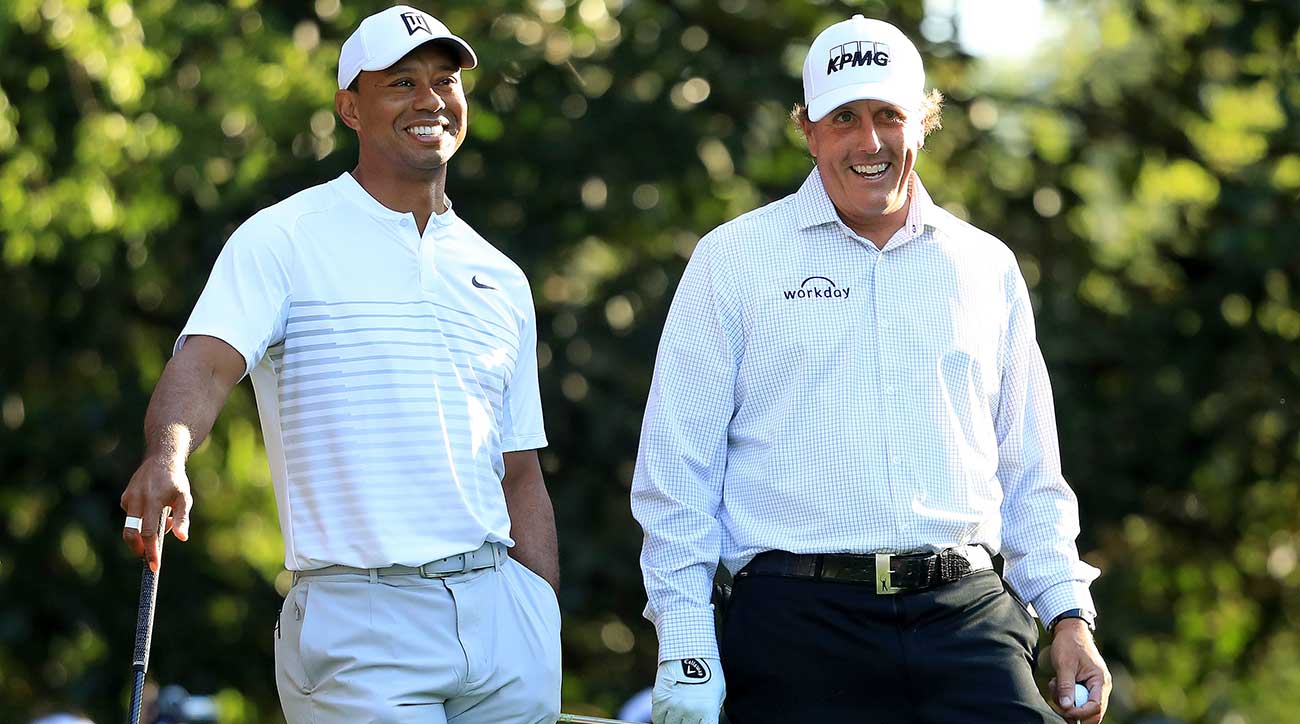 While the Tiger Woods-Phil Mickelson rivalry has been a lifetime in the making, their proposed $10 million match-play event was born in a sterile press room in Scotland nearly four years ago.

(Via Alan Shipnuck of Golf.com)

What do we all think of this? What other 1 v 1 bouts do we want to see? Will they be mic’d up? So many questions…

Please let it be a network that allows profanity. I know Soly and others mentioned paying for the unedited audio from the US Open. This is the chance to make this happen. I want to hear all the unedited smack talk.

I’d be so much more interested if it were them actually wagering $10 million of their own money. But since there’s no chance either of them walking away with less than (conservatively) $2 million it takes the appeal away for me. It’s a Hero Challenge with 2 guys instead of 18.

That said, They could be onto something if there were some million dollar “under card” matches out in front of them. Rory vs Spieth, DJ vs JT, etc. But again, WAY more interesting if they were all wagering their own money.

Yeah, I want them to put some money on the line too.

This is pure entertainment. Of course having a view into a big time gambling match with 5 mill on the line for each would be great, but this is a pipe dream. Maybe they will each throw down a million of their own money, but it’ll go to charity regardless. In my mind this doesn’t detract from the interest of this event if they can, hopefully, find a way to have some skin in the game. Thoughts of hearing them both have intense conversations with their caddies when it actually matters would be sick. However, what is in it for them to have a grinding 18 hole match?

Pay them both upfront, and then let them play a $200k Nassau.

it says in the article that they are both on board to be mic’d up. and Phil talked a bit in it about how since its not an official tournament there will be smack talk and stuff you’d never hear in a normal tourney. im all in for all of that

I suppose since it’s not going to be their own $10 million on the line, all the talk and conversation will actually be better for TV. But man I’d love to see them sweat it out down the stretch if it were their own money on the line. Financially irrelevant for each of them, even at $10 million…but they absolutely would each HATE to cut that check to the other guy.

Guarantee you it’ll be a new player like Amazon or Netflix. Free to all subscribers.

Not sure what I feel about it. Part of me really wants it. The cynical part of me thinks it’s Phil making azplay for his post golf career, thinking about what Arnie did. Imagine the power he’d get if this idea took off and became a ‘thing’.

Some of the following variables need to be debated among the Illuminati on the refuge. The powers that be will definitely be listening to our opinions. How would you chose to set this up?

I think my vote would be to have Fox run the broadcast, use the Trevino/Finau duo to give a gambling history lesson, have 3-4 undercard matches going to ensure live golf shots are being shown (maybe have each match playing a different gambling format), and start out using Shadow Creek in Vegas.

Special Consultants for the Match

This screams NBC/Golf Channel to me. Give me all the Johnny Miller on this one. Mike Tirico should be all over this and could provide some insight into gambling formats and the Vegas angle.

Agree this is best with an undercard or two. There will be mucho downtime if there’s only one match and it would be extremely entertaining to have a couple other matches. May I propose Poults vs. Reed?

Dream Venues? I think Shadow Creek is a good start but another venue wouldn’t have to be in the pocket of Big Infrastructure since I don’t think there would be a need for massive grandstands/concessions/facilities etc. Some grandstands sure, but I don’t see the need for big grandstands since this is a made for TV event and not a normal tournament. Doesn’t seem like the galleries would be that big.This opens up a lot of options. I’d love to see a match at a classic course that the Tour doesn’t go to.

Feherty completely unleashed could make this the event of the year outside the majors and RC!

And I’d add a Jordan vs. JT undercard as well. And Keegan vs. Jiminez would be spicy.

I think if it’s in Vegas the crowds are going to be huge and hopefully rowdy. Koepka and DJ under card would be amazing for the low key shit talking they would both do, total Bro vibe.

this needs to be big, like the way they hyped up McGregor v Mayweather

Joel Dahmen vs Sung Kang - that could get spicy

as long as we’re all throwing out ideas for undercards how about a Romo/Curry match?