The Shotgun Start Podcast (Or: Still a Birthday Podcast Until Proven Otherwise)

Just wanted to alert other refugees with long commutes that @thefriedegg and @BrendanPorath have a new Monday-Wednesday-Friday podcast that is very entertaining thus far. Their intro theme is top two or three among all golf podcasts.

I was prompted to post on here because their idea for a Bachelor style “after the final rose” debrief show for the Ryder Cup is ripe for refuge fan fiction. Borrowing ideas from the two esteemed hosts, I’ll set the stage and open this up for photoshops, long form narrative fan fiction and of course gifs. Heck, @Soly had one of the bachelor contestants on the main pod not too long ago. Maybe it’s time to invite Ben Higgins back on.

Note - for those few lucky souls who haven’t been subjected to the Bachelor / Bachelorette franchise via wife, fiancee or significant other a lot of this won’t make any sense.

Chris Harrison is replaced by Rick Reilly
We seat the euro and american caddies next to each other, same for WAGS. The Euro and American teams sit in stadium style couches on either side of the main interview stage.
The undefeated team of Molliwood is interviewed first. Rick Reilly, still trying to speak in broken Italian to Francesco, attempts dad-jokes for the first 5 minutes. There’s a quick break to commercial, but coming up after the break - an after the final putt exclusive tell-all interview with DJ and Brooks’ protein jar! 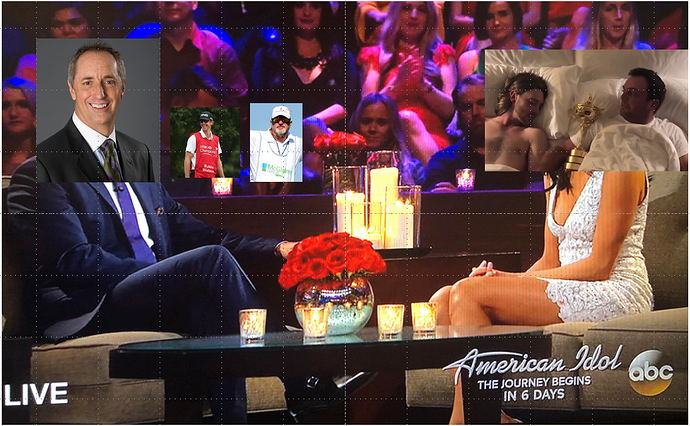 The surprise guests are obviously all members of Team Reed and they strut in to Hulk Hogan’s music. The show quickly devolves from a tell-all to golf’s first Jerry Springer style meltdown. Augusta makes the unprecedented decision to revoke Patrick’s membership. All the scotty cameron’s and rolex’s in the champions locker room breathe a sigh of relief.

I would write some fan fiction, but I don’t think that I could come up with anything as wild as what has already taken place (e.g., Tiger, Reed, Koepka almost killing a woman, the FedEx Cup system, etc.).

Only correction is isn’t Hulk Hogan’s intro, but this:

Interesting. This exact thing was discussed on ForePlay this Tuesday (Monday recording). I wonder who ripped off who?

Interesting. This exact thing was discussed on ForePlay this Tuesday (Monday recording). I wonder who ripped off who?

Talk about two polar opposite podcasts. That being said, I’d find it harder to believe that Andy and Brendan listen to ForePlay than the other way around.

I tried giving ForePlay a chance, because I want as much decent golf content as I can get, but those guys are unbearable.

Feel free to share your dislike for Barstool in that thread.

The concept of multiple discovery (also known as simultaneous invention)[better source needed] is the hypothesis that most scientific discoveries and inventions are made independently and more or less simultaneously by multiple scientists and inventors.[page needed] The concept of multiple discovery opposes a traditional view—the "heroic theory" of invention and discovery.[not verified in body] When Nobel laureates are announced annually—especially in physics, chemistry, physiology, medicine, an...

Another thread ripping on barstool? I’m in for it.

I am a marketing nerd so I think it would be fun to have a TV show that follows a high-profile athlete like LeBron, Tiger, etc., for three episodes or so and see how much shit gets pitched to their management team on a daily basis.

Episode # 1 - Quick intro of the athlete with highlights of them dunking/hitting/running and then showing them chilling with family/entourage. Athlete gets phone call from their management team:
“Hey, Bron. Gotta a lot of companies showing interest - Coke, Jaguar, Rolex, Apple, and Delta Airlines.”

“Cool. You know I like Coke and Sprite, so that’s a definite meeting for me. Skip Rolex but let it leak to Omega that Rolex wants these nuts.”

Narrator: “Next time on Deals…” (Camera shows LeBron rolling his eyes during a meeting with the agency representing Omega; then LeBron is on the phone with someone yelling, “These people don’t respect me or my brand. Find someone else.”

Episode # 2:
Quick recap of LeBron telling his management team which meetings to take and then it shows LeBron entering an office to hear the Coke pitch. A couple of highlights from the meeting - maybe a couple of ad mockups are shown, LeBron makes a few comments - what he likes, what he doesn’t. Agrees to having a contract drafted.

Episode # 2 continues with LeBron going to his next meeting and shit just hits the fan…Omega wants him to say cheesy stuff or whatever…LeBron then gets on the phone and bitches out his agent for not vetting their ideas. Agent scrambles to make peace by lining up Patek Philippe reps and signing an even fatter deal.

Episode # 3 Recap of LeBron signing deals with Coke and Patek Philippe and then follows him around as he does photoshoots/commercials/interviews/etc promoting the relationships.

Do this with four athletes at three episodes per and you have a 12 episode season. Perfect for netflix/HBO/Showtime. And if I see this idea in development, I will sue the shit out of you. 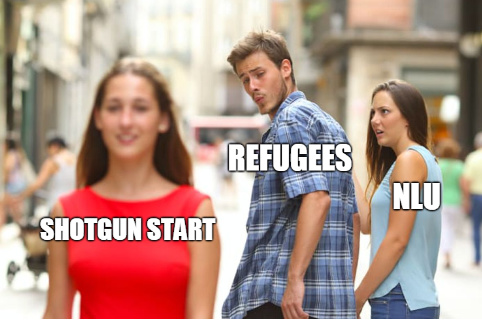 Pretty disappointed in that pod tbh. Andy is an interesting golf mind - I dont always agree with him, but I’ve learned a lot from his stuff and it’s almost always worth checking out.

Porath unfortunately seems like he likes gossip a lot more than golf. Hated the BMW, hated the tour championship, preferred Ryder cup press conferences over the Ryder cup. Was very very very excited to talk about Reed drama, Reed wife twitter, locker room drama, quotes etc. Seems like theres a market for that kind of lowest common denominator coverages, but it’s not for me. And it’s kind of a waste of Andy’s talent.

Porath unfortunately seems like he likes gossip a lot more than golf.

Porath is a man who understands how to get those clicks. And Andy has turned into quite the takesmith himself. He had a ton of good ones post Ryder Cup.

Also hilarious when Andy was cutting Porath off when he wanted to talk Ryder Cup drama for 2 hours… “Alright, that’s enough of this.”

It’s been pretty good, although they’ve been blessed by the content gods so far. It’ll be a challenge to keep things fresh based on the 3x a week schedule though. Also, if one more Patrick Reed story comes out, I’m worried that Porath will spontaneously combust.

In a perfect world of #content, this podcast can be similar to the Live Froms the NLU guys put up last winter/spring, good for recapping tournaments, the latest news, etc. And the boys here just do as many Strapped/Tourist Sauce series as they physically can, along with their more “big-picture” podcasts (interviews and the like).

I struggle with Andy. His voice just makes him sound like he has zero personality. I can’t imagine it’s fun to play golf with him. He’d be droning on about width and angles, centreline bunkers and Tom Doak rather than just relaxing and playing a game of golf.

I have to second the Shotgun naysayers. I like both of them separately and have expressed my love for Andy on this site. Andy shines talking golf architecture and Porath shines talking Tour golf. Together they don’t make sense. Andy is way more of a curmudgeon than Tron. To some extent that’s Tron’s schtick, and it works with his personality, but Andy’s takes (and maybe it’s his monotonous voice) are exhausting, he goes on such silly tangents and can be very condescending. I feel like Porath gets a little tired of it. Like I said, I like them both on their own but the Shotgun is unbearable for me, I unsubscribed.

i just have no idea what they are going to talk about 3 times a week during the winter.

Wow. I’m shocked that a group of people who joined a rather niche golf forum would have any objections to this podcast or worry about lack of content. There’s a PGA Tour golf event nearly every week of the year! Plenty of content for 20 minutes 3x per week for people that love golf.

I really enjoy this podcast. Andy and Porath’s intention was a fun, easy-to-listen podcast for your ride to work in the morning. And, that’s exactly what it is. It’s not too long, not too serious, and incorporates quite a bit of humor. I find their dynamic to be hilarious.

Andy spouts off about something ridiculous and Porath laughs about it. “Uhh…ok Andy”. It’s great.

you can legit hear the excitement in Andy’s voice when he’s concocted a scalding hot taek that he knows will throw Porath off. Case in point, being a huge Japan Open stan.