Golf comfort food around the holidays! 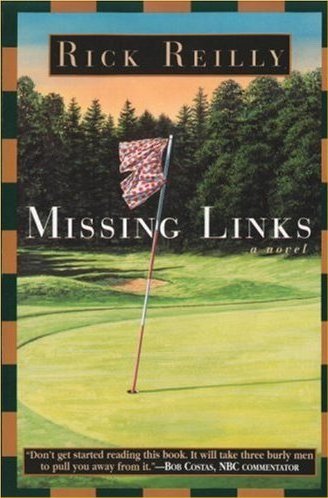 The selection this month: The back reads as such: Missing Links is the story of four middle class buddies who live outside of Boston and for years have been 1) utterly obsessed with golf and 2)...

This book came out right when I was getting into golf and growing up outside of Boston, I can’t think of a book that speaks more to my childhood. Phenomenal selection…Reilly still had his fastball back then. I make it a point to read this at least once a year. Ultimate toilet book.

Does this mean an interview with the author is coming?

If so, Randy better brush up on his Italian

I remember my dad reading this book when it came out and telling me that I wasn’t allowed to read it because of the adult content. He finally let me read it when I got into High School. Great book and there is a sequel out there as well titled “Shanks for Nothing.” Not as good as Missing Links but still an enjoyable read.

I vividly remember reading this, Shanks for Nothing and Who’s your Caddy during my freshman and sophomore years of high school. Between these three books and the back page of SI, it’s a shame to see Rick really lose touch. Dad jokes, speaking broken Italian, joining resistance twitter and confusing the hell out of Justin Thomas in press conferences is a bad look for old Rick.

I think someone mentioned in the 50 greatest golf books thread to just pretend someone else wrote these books. Good strategy for me.

His other golf book “Who’s your Caddy” is really good too. Each chapter is his experience caddying for someone different like John Daly, David Duval, Tom Lehman.

The first memorable round of golf I ever played was 30 minutes after finishing this book. As an aspiring sports writer growing up in the 1990s, I’d always adored Reilly and wanted to be some version of him. So I devoured his features and eventual back page columns. Eventually I tracked down this book, which was no easy feat in Missoula, Montana in an era before Amazon. Read it in two sittings. Finished it and drove immediately to my local course, the University of Montana 9-holer. Felt as free and joyous swinging the golf club as I’ve ever felt, before or since. I’d playing a bit growing up – my parents were big golfers – but never taken it seriously. Never cared, and gravitated toward football and basketball and baseball. But that day, for seven holes, I couldn’t miss. Struck every shot in the center of the clubface, and the clubs I had back then were shit. Put one on the green on a Par 5 in two from about 240 with a nuked 3-wood, and immediately felt like Ray in the climatic scene. Stood on the eighth tee feeling like this was the greatest game on earth, and that I was going to break par for the first time on a nine.

Made a 10 on the 9th when I drove it into the driving range, then hit it OB after taking a drop.

It was true to the spirit of the novel. Felt like I was channing Icarito before the True Icarito came of age.

Feel like I need to read it again, and this is a great excuse to do so.

My forum name may indicate that I have read and enjoyed this book many times.

Downloaded to the kindle. Always fascinated to read about the American private clubs system and general golf on the other side of the pond

Nice - I did enjoy this one a lot when I read it nearly 20 years ago, and I think I still have my copy somewhere. The clear parallel to the thinly veiled fictional courses are The Country Club and Putterham Meadows n Brookline, literally separated by a fence but otherwise could not be more different in terms of conditioning and exclusivity.

There is also a state-run course in Canton, MA called Ponkapoag, aka Ponky, which must be the source of the name. Ponky is where they used to play the CYO Tournament, which was the biggest junior event in the Boston area - it seems to have disappeared in the past 5 years or so.

Ordered this months selection and should be delivered next week. Really looking forward to reading it based on the comments above.

I’ve read this a fair few times over the last few years.

Always thought it would be a fun movie / mini series.

Agreed. The book would make an awesome movie! It’s a caricature, but there is so much truth behind it. The bad in golf - the pretentiousness, the exclusivity, the stuffiness is there, as is the joy of playing with a fun group of guys, the gambling, the characters you meet, the challenges you face.

I think those positives are why so many people have jumped on the BCN bandwagon. What is less pretentious and more about pure golf than a six-hole club that gives out memberships for free?

I know I’m super late to this thread, but I came to this book after flying across country and being seated next to someone reading this who was literally laughing out loud multiple times. I ended up buying it and liking it so much I bought copies for my other golfing friends as gifts. Rick Reilly might be a sad story now, but this was such a treat back in the day.