Sounds good, just wanted to make sure. The standings have been updated. Thank you!

Is anyone trying to play a match in northern Ohio this Friday around 1-2pm? Myself and @evanjill (if available) are possibly playing our Pod 8 match around then. If someone has a time somewhere or wants to get together for their own match we’d love company. Even if we don’t play a match I would still like to play, prep for NFLU the next day.

Getting closer and closer! 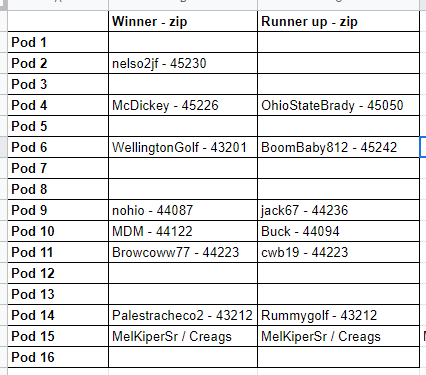 Just a heads up. @blackhammer and I are really having scheduling issues mixed with weather last week in trying to get our match in. Even though our pod spots are sewn up and both of us are not advancing, there is a chance that we might not get our match in.

What are we thinking for pod 16…not sure @RyanNas is around (not throwing shade!)

Single elimination from 32 on. Top two from each of the 16 pods are going to advance to the elimination rounds.

@Moomba and I are playing our pods final match Saturday at 1:00 PM at Cherry Blossom Golf Club.

What are we thinking for pod 16…not sure @RyanNas is around (not throwing shade!)

I am around. I asked if anyone could get out in the next 7-10 days (8 days ago) and my one offer was to drive to an event I wasn’t signed up to play in, haha.

If I need to bow out, no worries…but am also happy to play, I just didn’t get responses.

Completed a Pod 8 match today with @evanjill. We walked around Valleaire in Hinckley with @Gobrownies09. Course is in great shape, first firm round of the season, balls were bouncing (sometimes a little too much).

We went to the 16th hole and I was 3up, Evan pulled his tee ball and got up and down from a pretty gnarly lie. Go to 17, chunk chunk putt putt by me and its 1up going to 18. We tied the hole with bogies to finish the match with my eeking it out at 1up.

Got a little snug for my liking but was a really fun round and a great walk.

Pod 7 is complete with the mega match at SSGC. Almost all the marbles in one round. Andrew and Chris played earlier this week.

Was good golf played? Not really. Did pars and bogeys win holes? Absolutely. Did I have 12 bogeys? Fer sher. Were they almost exclusively of the comfy two-putt variety? You betcha.

Since I’m not like you lunatics with your weird ass photographic memories and generally forget a hole as soon as I’m on to the next - it was a back and forth battle with neither combatant getting more than 1up until I put it away on our 17th hole. That’s all I really got.

Also can confirm…a battle royale it was NOT.

Completed a Pod 2 match yesterday with @NSenak88 at the University Club of Kentucky Wildcat Course. We mostly lucked out with the weather as a thunderstorm cell loomed just off to the west for nearly the entirety of the round.

It was a scrappy start from both of us as after 3 holes we each had hit a ball OB trading off holes. Once I got my driver in a groove I went on a run to get to a 4 hole lead at the turn. NSenak88 didn’t give up though and kept battling to with a tie on 10, a win on 11, before giving one back on 12. Teeing off on the short par 4 13th I put a great drive out in the middle leaving myself a short pitch shot, NSenak steps up to the tee to follow suit bombing his drive right up to mine. NSenak hits a stellar approach to a front tucked pin leaving himself a ~7ft putt while I came up short; NSenak makes the birdie putt to bring it back to 3 with pops coming up on 14 & 15 with a chance to make some noise coming home. The par 5 14th we both hit solid drives, but NSenak was partially blocked out by trees forcing a layup. We end up with a chip off a couple yards of the green sitting even (with the pop), NSenak sticks it to 1ft really putting the pressure on. I step up and make a clutch chip to 1ft as well holding onto my 3 hole lead with 4 to play. 15 is a 200 yard par 3, and with NSenak popping and the rain starting to come down, the pressure was on. NSenak left the door ajar coming up short right, and I took advantage with one of my best iron shots of the day to 20ft. Out of a tough lie NSenak hits a great recovery shot to stay alive. We wind up pushing the hole going to 16. With the rain coming down even harder NSenak puts a great approach shot into the green while I came up short. After I chipped to 5ft, NSenak had to be aggressive with his 15ft birdie putt to win the hole to keep the match alive. Unfortunately with the green sloping away from him he burns the edge and rolls past the hole and misses the comeback putt. It was 4&2 when it was all said and done, and with the rain coming down harder now we called it a day with the match decided.

Really enjoyed playing with NSenak and it was a closer match than the score would seem. If a couple shots went the other way on the front 9 it would have been a remarkably close match all the way through.

Pod 8 was wrapped up this afternoon under the clear blue sky at Pine Hills. @PlumbBobMillionaire tried to take one two opponents at once, myself and @evanjill. I continued my Sycamore Springs performance and hit the front half of a lot of greens. Not the flashiest, but the best way to win today. Despite opposing eagles on #7, I was able to prevail over @PlumbBobMillionaire 6 and 5.

Despite opposing eagles on #7, I was able to prevail over @PlumbBobMillionaire 6 and 5.

The highlight of the day was tying a hole with an eagle. Also, @quicktempo is underselling his performance. A truly inspiring performance off the tee and steady ball striking led to a dominant win. Missing two fairways and maybe three greens in reg seems like a nice formula to win a match.

I prevailed in my second match against @evanjill who didn’t have his best stuff but was still a fantastic hang. 5&4 I believe was the score.

Pod 8 is officially a wrap. Congrats to all who advance.

This truly was a very fun match. I am glad the back 9 turned into a much better back and forth after me bringing a pillow to a gun fight on the front 9.

The best hole of the day still was our first Par 3 when Moomba stuck it to 4 ft from 147 out and down hill. I managed to hit the green but a lot of left to right spin hit the slope but left me with a very long birdie putt. Losing a Par 3 with Moomba making birdie and me making Par will always be okay in my book.

Definitely did not have my “A” (or “B” or “C”) game for these matches, but truly enjoyed the courses, the weather and most importantly the company along all three walks this past Friday, Saturday and Sunday.

Thanks to Jim Flannery, @quicktempo and @PlumbBobMillionaire for putting up with me and for some solid competition. Looking forward to many more gatherings with this bunch.

Played my match with @methridge yesterday afternoon. It was a steamy day at Losantiville. The course is playing tough with the rough grown high and thick - punishing drives that strayed even mere feet from the fairway.

Mike played steady golf on the front, building a 3 up lead after 8 a smattering of comfy pars and sensible bogeys. I fought back to get to 2 down heading into the turn and then 1 down after 10. With a par beating a bogey on 13 I finally brought the match back to AS for the first time since the 2nd hole.

I steal 15 and 16 and I’m 2 up with two to play on 17 tee (the same hole where I lost to @PrincipalKnows). I pull my tee shot into the left bunker. Mike looks like he’s going to be tight but the slope of 17 green and LCC’s notoriously fast greens have him run through into the rough just right of the flag. We both fail to get up and down and a bogey push gives me the match - 2&1

It was a fun match and a great afternoon of golf!