@the_cad_says Is Running for President!

Statement from His Grace, @The_Cad_Says :

Four score and seven months ago our NLU fathers brought forth on this internet, a new forum, conceived in Liberty, and dedicated to the proposition that (almost) all swings are created equal.

We set sail on this rumpled links because there is new knowledge to be gained, and new match play comps to be won, and they must be won and used for the progress of all golfers. For golf science, like nuclear science and all technology, has no conscience of its own. Whether it will become a force for good or ill depends on man, and only if The Refuge occupies a position of pre-eminence can we help decide whether this new ocean will be a sea of peace or a new terrifying theatre of … cycling.

So now we are engaged in a great un-civil war, testing whether this forum, or any forum so conceived and so dedicated, can long endure. Perhaps it’s fate that today is (almost) the Fourth of July, and you will once again be fighting for your freedom. Not from tyranny, oppression, or persecution… but from annihilation. We’re fighting for our right to live. To exist!

The world will little note, nor long remember what we say here, but it can never forget what we do here. It is for us the Li Roy followers, rather, to be dedicated here to the unfinished work which they who fought here have thus far so nobly advanced. It is rather for us to be here dedicated to the great task remaining before us - that this forum, under God, shall have a new birth of freedom, and that government of the people, by the people, for the people, shall not perish from the earth!

Crawford is a fucking good dude.

He is everything woke golfers wish they were but he is so woke he doesn’t know what woke really is anymore.

He’s grown the GB and I chapter of the RACDG to nearly 100 people, with a WhatsApp chat handling over 800
Messages a day, serveral meet ups and outings, poker tournaments, fashion advice, reasons why not to use iron covers and much more.

He is a complete wierdo who refers to himself in the third person which Gary Henderson hates.

He basically sits about all day doing fuck all so will be able to dedicate his time to the cause.

(Did you tell them about the iron covers @GaryHenderson1? That’ll play well with the voters.

Whatever the result of this election, I hope this line goes down as one of the great endorsements in the history of Refuge politics.

This may need moving to the proper location too…

@McSchvantz - are you able to produce the wizardry required

Admittedly, not a good start for our president, but, if Trump can get elected with all his mistakes, @The_Cad_Says can breeze this!

Just a few mock ups to further this cause… 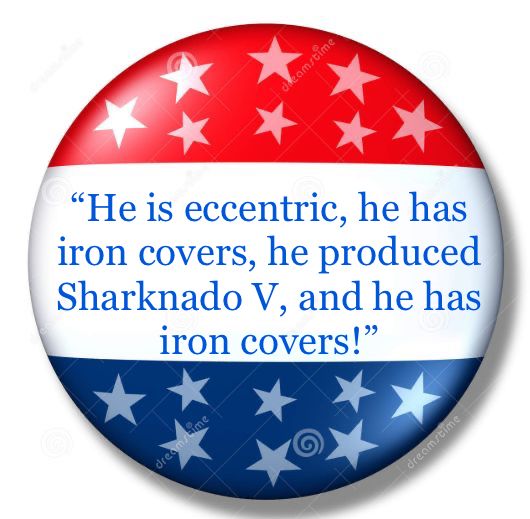 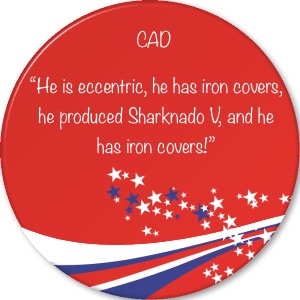 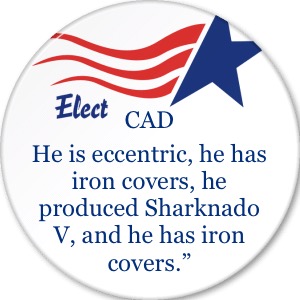 [This is not an endorsement]

Now don’t be shy @LJP We all know an endorsement when we see one!

Listen, I would consider a @The_Cad_Says presidency if my guy @Hala-Mark-Rey wasn’t running but I have some questions about the candidate:

What say you Cad?

Location schmocation. I ride my own road. Carve my own wave. Drill my own … hole.

And, sometimes you just need told by your elders.

But I’m American and I want it now!!!

Brings me to a final item for His Grace…your thoughts on the lack of belts in the NLU pro shop?

Ya hate to see it: 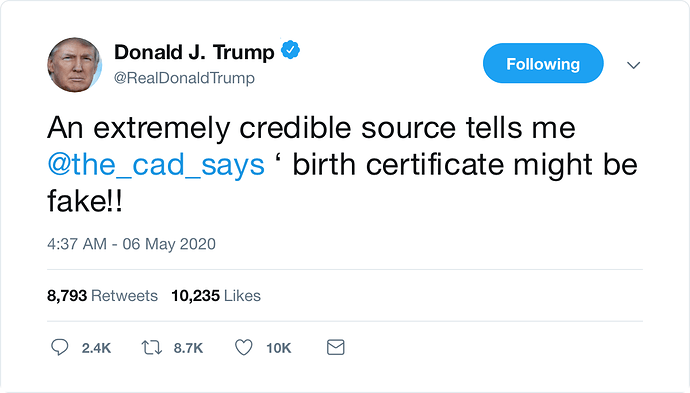 Listen, I can provide any birth certificate you want, from any country you want, upon request. My tax advisor makes them for me.

As a member of the aristocracy I have several willing indentured servants on hand to keep my ‘pants’, as you so vulgarly call them, at a respectable level at all times. I therefore recuse myself from having an opinion on belts.

Considering asking @Eric_Denver to be my running mate. Need to shore up the Country Club vote…