Sheep Ranch Review from preview round 5/16 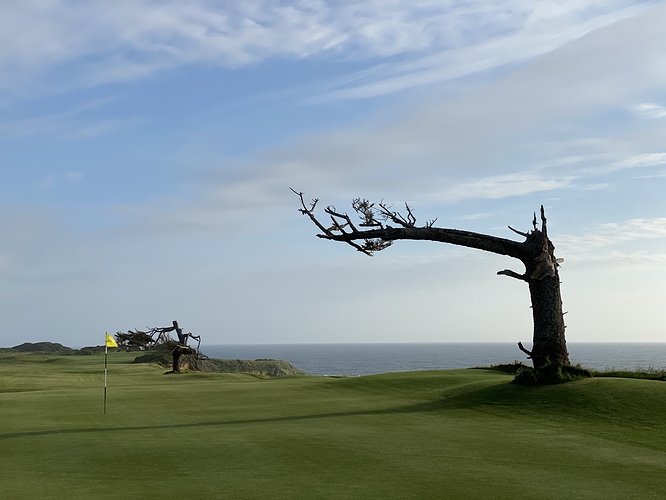 Just got back from Bandon last night, and figured some of you would enjoy a review of Sheep Ranch, which we were lucky enough to play via their limited preview round program. This was our 2nd round of the day, and the wind that had picked up significantly in the early afternoon on Pacific Dunes was accompanied by rain when we teed off at 3:15pm.

We agreed in the shuttle ride to the course that this was one of the only courses in the world we’d venture to play in the conditions that had blown in after a beautiful morning. The first 5 holes are a bit of a blur, as we were just trying to manage our rain gear and survive. As a SoCal guy, I’ve never played in sustained winds that high, and rain to go along with it. The first hole is probably my favorite opening hole on the property, a sweeping par 5 that spills from the clubhouse toward the coastline with a huge green that looks like it will act as a backstop but deceivingly allows balls to roll to the back. I tried to play a nifty hybrid putt to a front pin from about 50 yards short of the green, and faced a 50 foot comebacker as my reward. Gravity is a bitch. After the opening hole, other front side highlights were the double green shared by 3 and 16, which gives you a sneak peak at the hole you will definitely be talking about the most at dinner. The tee shot over the jagged coastline on 6 is bad ass. Think of the approach on #8 at Pebble, but with a peg in the ground and driver in your hand. I bailed out left due to survival mode, but look forward to taking on the pro line one day. 7 is the 3rd par 3 of the front side, with a huge green that has an infinity pool effect as it ends at the cliff’s edge. By the time we reached 7 tee, the sun had come out and the wind was dying down.

Sheep Ranch famously features grass bunkers due to the fact that sand bunkers wouldn’t be practical to maintain on such a windswept property. Many feature long grass and bad lies around the edges, with manicured rough in the bottom flat portions. Others are more rugged in their entire footprint. The course is definitely designed to play in the wind, as you can take many lines off the tees and won’t find a lot of “trouble” to compound the challenges the wind presents. We found the greens to be very slow, especially compared to Pacific that morning. This may be partly because they are new, and partly by design to allow balls to hold on undulating greens in high winds.

The routing takes you down to the coastline early in the round, then back inland mid-round while still providing sweeping views of the entire property. 11 is a great par 5 that goes straight uphill for the last 150 yards or so. 12 is a long par 4 towards the water and into the prevailing wind, and then you are rewarded with a reachable par 5 down-wind. Put me down for a birdie if you are scoring at home, and make sure to note that up and down from the green-side grass bunker. 13 is a blind T shot where the line is “over that rusted out water heater” according to our group caddie. If you bomb it, you will carry a sheer wall fairway and have a short approach. If not, be ready for a blind approach to a wide green with a grass bunker short left and tightly mowed collection area long.

The really payoff is the finish stretch, starting with a drivable par 4 at 15. If you take on the coastline on the left side you will have a good angle and be thinking birdie. If you bail out right with the wipey fade, you are taking your chances with the lie and will have to navigate a huge mound that protects an undulating green. 16 is possibly the coolest golf hole I’ve ever played. It’s a short par 3 that is jammed into a tiny strip of land between a mound of gorse bushes and the sheer cliff coastline. Supposedly its the western most golf hole on the continent, and when reaching the tee box you can’t really imagine how someone managed to fit a golf hole there, but you are glad they did. I hit a bit of a chunky wedge that caught the downslope on the front of the green and rolled out to 15’, but dammit I left the putt on the lip. The path to 17 tee is framed by 2 deadwood trees that then reveal another short par 4 where the fairway is literally mowed right up to the edge of the cliffs on the left. This hole features 2 more iconic trees on the left side, including 1 that hangs out over a portion of the green that hugs the same cliff. 18 is the shortest par 5 I’ve ever played, and our group did have 2 birdies (including a lipped out 12’ eagle putt). A good drive up-hill leaves you with 175ish up-hill with the ball below your feet and a huge menacing grass bunker protecting the right side. Is it a par 5? Not really. Is it a par 4? Not for most players. But it’s the perfect ending to a really fun golf course. As the last 2 groups off the tee that day, we had the place to ourselves as the sun was starting to set. I need some time, and maybe another round or 2, to figure out where to put Sheep Ranch in my Bandon rankings. But I can tell you it lives up to the hype, like the rest of the resort always manages to do.

Holy shite. This is amazing. How did you find the afternoon wind?

@Q-school @leric90 do you have photos to post also?

Wind wasn’t bad once the storm blew through. I think its usually south or north wind depending on time of year but we had a bit of a southwest wind in the afternoon.

I didn’t take photos was just trying to absorb it all in, quite tremendous - shot 75 and was grinding hard as well

Wow amazing pics and write up thank you.

Mixed emotions as literally 6 hours ago I cancelled our July trip to Bandon. We had two rounds on Sheep Ranch booked.

Mixed emotions as literally 6 hours ago I cancelled our July trip to Bandon. We had two rounds on Sheep Ranch booked.

Oh, man. How close was the call? Unless you had a deadline, I’d have held out and maybe looked at alternative ways to get there or something…

Oh, man. How close was the call? Unless you had a deadline, I’d have held out and maybe looked at alternative ways to get there or something…

I’m with you generally speaking. But, flight schedules got all jacked up, and I’m not sure I even trust them to get me out there at this point. Also feeling some pressure from the family (read: wife) on traveling until things settle down more…which who knows, they might by the time July rolls around. Until the next time will live vicariously through threads like this one.

I was supposed to go to Pinehurst at the end of March for a 4-day trip. Three rounds of golf.

At the time we canceled (March 13), it was totally the right decision. Things were shutting down, travel bans going up, etc.

But the last day of the trip, we looked back and totally could have gone: it was 80° every day, sunny, and the courses we were going to play were open.

It worked out for me though, as we got to go about a month later, but for seven days, and to play five rounds of golf at better courses, for about 1/3 the price.

Played with @Q-school the past 7 days at bandon, there was very little wind on the course and we lucked out 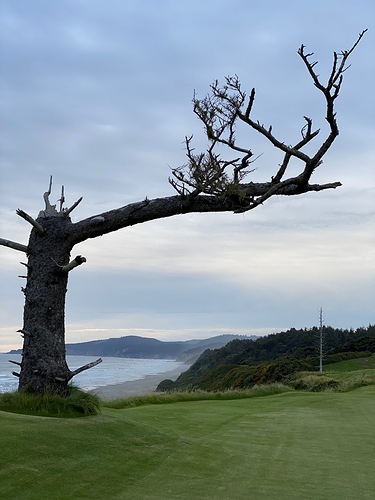 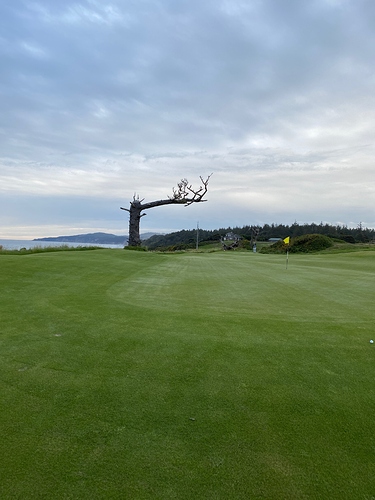 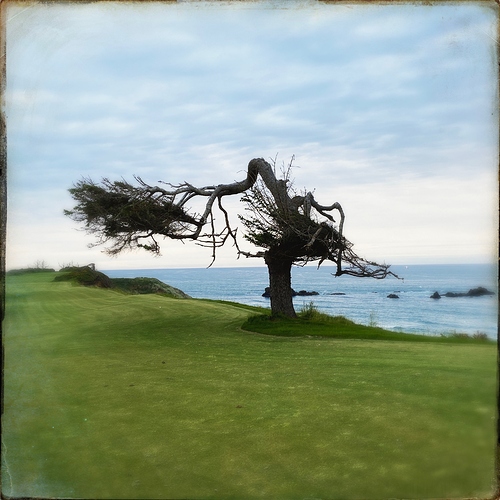 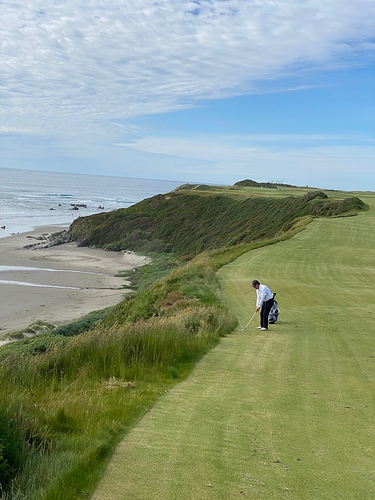 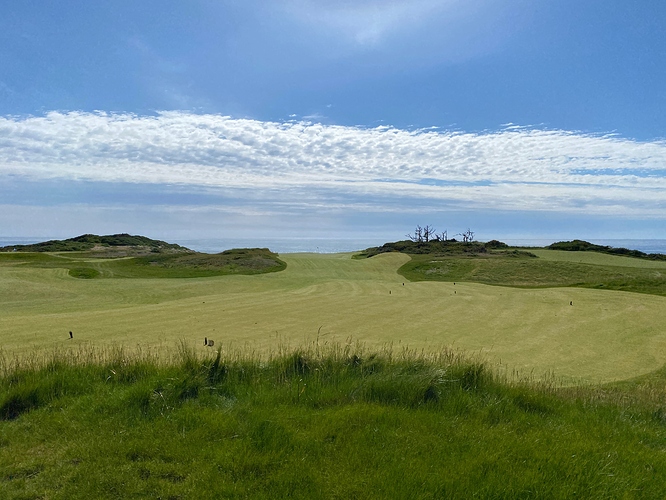 Thanks for the primer guys. I am headed there for opening day and am giddy. The place looks absolutely raw.
Anybody else there on opening day?