I’ve never attended a Refuge meetup so if anyone has recs from this point forward let me know. Simple google doc? I’ll copy from one of the other threads tomorrow unless somebody else wants to in the meantime.

I’m running into a bit of snag on Amtrak as well. Golf bags. You guys aren’t going to believe this, but their website is confusing as hell.

Carry-on golf bags are only allowed in the Midwest? https://assistive.amtrak.com/h5/assistive/r/www.amtrak.com/onboard/baggage-policy/baggage-special-items.html

Appears Palatka isn’t a checked baggage station, but WP is. Not sure if that means we can check them at WP and unload in Palatka?

We’ll continue to refine some of the details for Friday and Sunday, but Saturday is definitely locked in from 8-3.

I’ll set up a google sheet similar to what they’re doing for Charlotte today if I get the chance.

Just put a hold on my calendar for this.

Sign up on the google sheet below whether you are confirming or TBD.

Will continue work on train logistics, but let’s get into some of the other items.

With all of this talk about the distance report I think we should incorporate a tour balata component to the shenanigans. Maybe a 5-hole loop? 5 ends by the clubhouse.

Kind of the perfect place for it with it tipped out at 5900.

I’m not a super long hitter or anything but the greens are definitely a challenge that make up for the shorter length at Palatka GC.

Haven’t forgotten about everyone in here. Just been a little distracted with my April Scotland trip evaporating in front of my eyes. Will turn the focus to this as work productivity grinds to a halt.

Are there proposed dates? Sorry if it in the thread, I didn’t read the whole thing.

heard florida is beautiful that time of the year…

If your definition of beautiful is almost 100 and humid as all get out, then yes it’s beautiful.

Haha, I actually proposed cooler times. My fellow Floridians pushed us to that one.

Gotcha. The itinerary is great, wish I could join. Wife is due August 7th.

Way behind on RSVP’ing…

I want to do it, but have a family wedding the weekend before out of town and need to nail down travel plans… Throw in this COVID nightmare…

Bummer. I just canceled my May trip to Scotland last night.

Some follow-up discussion to the Nest pod comments on Palatka.

Backstory: @soly, @tron, and @Randy had a brief discussion on Palatka and Tron asked Randy if he considered it a real course because it was only a Par 70.

Like many courses, Palatka closed during World War II. The eastern boundary of the course included the train tracks you plied on your Jacksonville to Winter Park 9 journey. Pre-WW2 the tracks had a pretty nasty curve in them, which can be seen in old aerial photos in the clubhouse. I’ve roughly sketched the old path in the photo below. During the war, the curve was straightened. When the course reopened there was no choice but to shorten the then-Par 5 15th and Par-4 16th to a Par 4 and Par 3, respectively. This is the reason why the Par-3 16th is almost a dogleg through the trees. Now you know, the rest of the story. 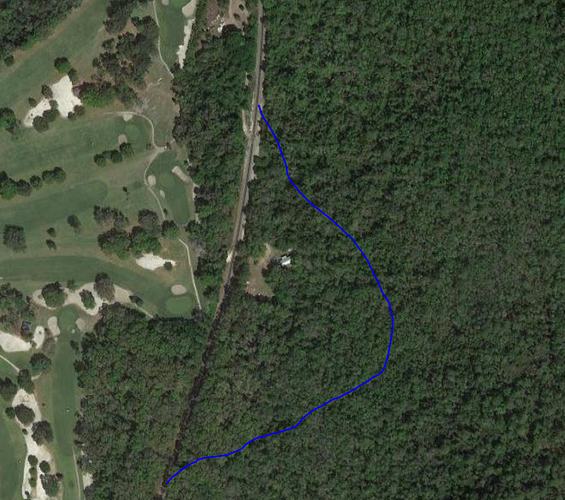 Amazing! Thank you for sharing

Also to add to the pod… If you ever want another crack at playing Palatka, feel free to give me a shout! I work down here and play Palatka after work quite a bit, plus I’ve been trying to get @Hwhite out here for weeks.

We have a crash course Palatka on the horizon!