Roll Call: Ohio (Post fall maintenance intel if you got it!)

It was always my impression that East-siders (many of them newer to Cincinnati than West-siders, who often had much longer family ties to the land) cared about the East vs West-side rivalry way less than West-siders. Certain sports rivalries have one fan base claim that they’re not as into the rivalry as the other side, to seem more above the fray. I always got that vibe from the East-side. West-siders brought up “Oh…you’re an East-sider” with a wry grin about 7 times as frequently as an East-sider would…(but I was a kid from the East-side so could be biased.)

Love the Little Miami recollections here. Never expected a pitch-and-putt to have so much affinity in this group! I’m getting a great kick out of it. If you were at Little Miami from 2005-2011, I definitely sold you a greens fee, drove the caged range cart/picker past your best attempts at target practice, or begged you to leave the course once it had been pitch black for 30 minutes so I could park your cart, lock the gate, and go home. Good high school/college-summer job. For a non-country club kid, it was the best ticket to free golf and range balls to pay for my golf addiction. Working at a Hamilton County Park District course also allowed me to play any HCPD course for free, which included The Vineyard, which was a solid public track and close by to home in Anderson.

the restoration work that was just completed there looks awesome. hoping to play in the TDGA Best Ball just to get out there and play it

Hey all, not a native but will be in the Akron area for a week and looking to see and play some good courses while I’m in town. As everything in the area is overshadowed by Firestone on the internet, what would you recommend?

Grew up and live in Columbus, but attended UC for undergrad and law school. I picked up the game while in law school. Several of my classmates and I would be sure to avoid scheduling classes on Friday afternoons so we could have a weekly pot game. Blue Ash, Sharon Woods, The Vineyard and some of the Northern Kentucky publics … Kenton County and Boone County … were the usual venues. Good times! Great public golf in the Nati!

Boulder Creek in Streetsboro is about a half hour drive from Akron. It’s expensive, but it’s worth it. One of the nicest public tracks in the area, IMO.

Anyone in here in need of a random player for a golf outing?? I always have issues with trying to find enough people for a foursome and then my friends bitch about the cost. I will travel to the following areas to play. (Full Disclosure: 18 handicap with flashes of greatness. Once shot 49 on the front and came in with 35 on the back in club championship.) 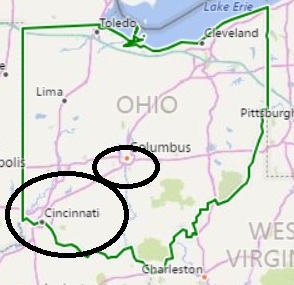 Hello all, checking in from Centerville, just south of Dayton. I’ve been to most of the public courses around town and play a lot at WPAFB…thinking of joining somewhere later this fall or next year. Not sure where with lots of options at lots of different price points.

THIS HAS BEEN FILLED - Thanks Everyone
Take a day off work and play some golf! Looking for ZERO people to join me for a golf outing outside of Cincinnati on Friday, August 3.

Sounds fun! I actually have the day off, and coming off of my annual work outing the day before at Shaker … what’s the format?

I’ve been somewhat hesitant to post this…but if anyone is looking for a phenomenal charity outing in Ohio for a great cause I’d love it if you would consider this one. It’s on Monday, September 24th at Kinsale and Scioto Reserve CC in Powell, Ohio.

@Soly himself played in the outing last year (there will be some NLU prizes and/or auction items). Chris also wrote an article about it in the summer of 2016 before we even had the first outing.

With everyone’s help we’ve been able to raise $130,000 in two years to help fund promising research to beat Duchenne Muscular Dystrophy which is a devastating and fatal genetic disorder.

Check out the link and article if you want to learn more and see if there is something you can do to help.

So…do you have a team or are you looking for some participants?

I don’t play in the event as I want to make sure I’m getting around both courses thanking everyone and making sure they are having a good time.

If anyone wants to sign up as a single I can definitely pair you up with a good group since I know a lot of the people who play. We should have over 200 golfers on the two courses.

I will check my schedule and see if I can make it work.

Would be good if there were a couple NLU groups from this thread to play. If I can’t play I’d be more than happy to donate a foursome to the course I run in Findlay.

I would definitely be willing to add in some bonus drink tickets and maybe @Soly could throw in some credit or discount in the NLU shop?

Cincinnati people… Newer to the area and looking for a regular place to play. Just getting settled in the Hyde Park area. Would consider joining a CC (could get a junior membership) if the cost and commitment was worth it. Any recommendations from those of you that play regularly? Where do people that are serious about their game play, what clubs are more social than golf, are there public options that might be a better option, etc etc.? Any thoughts would be great! Thanks!

Here are a few questions to get you started:

Are you a second-generation millionaire? If so, befriend a member of Camargo and hope they invite you.

If you want a family club with some awesome amenities as well as two 18-hole golf courses, join Kenwood Country Club (KCC) - no tee times is a bonus.

If you want a solid club with a Donald Ross design, go to Hyde Park. Young families and hot moms run that place.

Terrace Park is an inexpensive option. They have a great indoor practice facility as well as a great outdoor short game area.

Oasis (North of 275, Loveland area) is an Arnold Palmer design in a housing complex. I have never played it…most people who join there seem to matriculate to KCC or Hyde Park.

Maketewah might be a little farther from your house than the others on this list, but it is an 18-hole Tom Bendelow/Donald Ross. They just redid their outdoor short game area. It’s pretty sick https://www.youtube.com/watch?v=jiWIuVd_QNg Will Grimmer was/is a member there. As far as cost…I am not sure. I had heard that they slashed their initiation fee, but that was a couple of years ago.

Losantiville Country Club is a great value for an old-school course with practice area. It’s a Tom Bendelow design with some of the best greens in Cincinnati.

Coldstream is probably pretty close to KCC as far as cost and amenities. However, it only has one course. Slope is 140 and stretches just over 7,000 yards from the tips. I have not played in a long time but course conditioning is top-notch.

Cincinnati Country Club is close to Hyde Park and is another old-school course. The guy who owns the Reds has a house just off the fairway (can’t remember which hole) and is next to one of the best private schools in Cincinnati. Traffic can get heavy in that area but it is a place to be seen.

Those are the majority of the courses on your side of town.

Depends on what type of golf you like and how much of an emphasis you place on course availability/price/location.

Hyde Park is probably the best course for the price.

Both 18s of Kenwood are solid…and no tee times (even on weekends) is money.

If you want to challenge your skills as a golfer, I think Coldstream is probably best in that regard.

One thing that I forgot to mention in my first reply is the lack of good public golf in the area. From Hyde Park, you have three public courses within 25 minutes that are good: Stonelick Hills, Blue Ash, and Legendary Run. However, there are so many outings and leagues at all three that it can be a giant pain in the ass. And, Blue Ash sees a ton of rounds in the summer and it is only going to get worse as a huge high-end housing development is going in across the street.