I mean for them to want to recreate the sweetens model doesn’t seem possible because they have enough money to fund it. Sweetens only comes about because of the struggle with money and I don’t think you can buy that.

What is the sweetens model? (may be a dumb question but I guess I don’t see what is that different from just a cool standard 9 hole course)

I’m guessing it’s more of, for lack of a better word, vibe they are looking for. But again I don’t believe that’s something money can buy.

Based on the article, its going to go for 10 million, which is a nice profit for one year.

I quoted the membership email earlier (I’m friends with the pro) but I thought they made it seem pretty clear that the course would remain open until the end of 2020, but, no promises.

I spoke with Steve Napoli a while back about the changes they had made - renovated the clubhouse, bar, for one - and they were looking to change the “vibe” as @Joezwickl pointed out. They wanted to make the bar a place where “normal people” could just come and hang out and get a drink, use that for income. (I thought that was… weird, but, that’s just not something that I in a non-golfer’s shoes would even think about. I was wary of clubs before I got into the golf world).

I have also heard the “Sweetens” rumor, but… I don’t know what that would look like. Even Sweetens (now that it is popular) is going through identity struggles / popularity growth / etc. There are a lot of reasons it works that aren’t just “architecture”, and I genuinely am not sure that the model is scalable, but that’s over my pay grade.

I would give a lot to move 3’s green complex into somewhere I had permanent access to.

I saw Steve and Brad about two weeks before the sale was finalized in 19 and they talked about changing the culture of the club and doing things their way blah blah blah. That is REALLY hard to do in certain parts of the country. One of the things that makes sweetens work is it’s location to a thriving city like Chattanooga. I hope it works out but I’m not holding my breath

woah what who said that

I think something else that makes Sweetens work is that Chattanooga is actively growing. There is ROOM for new things. Unfortunately Providence is not growing, and Boston is well-established. Most “target” golfers already have their established golf (private clubs or other memberships).

investment group led by Brad Faxon stand to make an estimated $10 million profit on the sale of Metacomet Country Club, a 118-year old 105-acre Donald Ross-design overlooking Narraganset Bay, which they purchased in April 2019 for $2.2 million, after breaking promises to improve and keep the course open.

Ugh. I’m just disappointed. (Think I have played 8 rounds there this year already if not more, and it’s February in new england.)

edit: this is the caption under the headline photo in the article posted by @rka above, which is here. @desertduffer 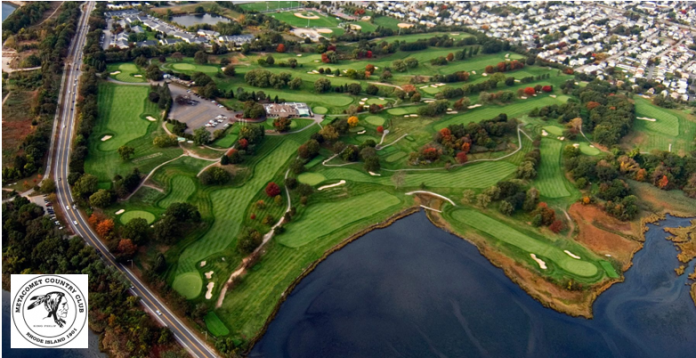 What story are you quoting, @anon26814599? I know nothing about this course, but it seems odd that a property that was listed for ~$3 million would sell for ~$12 million a year later in this climate. I’d like to learn more.

“Ex Professional Golfer Turns Out To Be Money Grabbing Scumbag”

If I had a dollar for every time I’ve heard that headline.

First Faxon reveals that he is a fan of Fox and Friends. Now this? Officially OUT on Faxon.

Brad is a local hero. They took their offer over others

I’m just waiting for the revelation that the Faxon group some Curt Schilling-level tax breaks from the state because he’s the local kid made good.

This kind of sucks. One, I was really hoping to play this course later this summer when I make a trip through there. But also because I thought Faxon was one of the good guys, but it turns out he’s just another scumbag willing to take advantage of people to make a quick buck.

Based on what I have read on Golf Club Atlas, this is not a Ross design. The original design was by Willie Park, Jr., re-worked by Ross, but remains WPJ to a significant degree.

Regardless, it’s never a good thing to see a classic design go under. 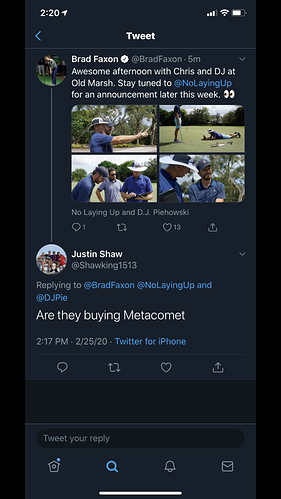 Say nothing if this is true @Soly

Eh, I know Willie Park did the first routing/design but if I’m not mistaken Ross completely re-routed the course when he came in 10 years later. I think I remember he built 10-12 new holes. So it’s definitely at least part Ross. Holes 3 - 6 and 13 - 18 in particular stick out as Ross to me.

I’ll see if I can find anything on GCA that affirms this and report back. 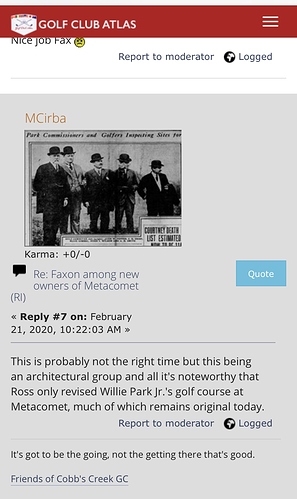