Is Donald Trump good for golf? (Winner of the Worst Thread on The Refuge Lifetime Achievement Award)

Whether we like it or not, golf in America isn’t just mixed with politics, golf is politics. The game would be inaccessible to many Americans if not for subsidized local municipal courses. Almost every US president has played golf since the game first arrived here.

Donald Trump is many things, and some might say that above all else, he is a golfer. He’s been more dedicated to the sport than nearly anything else in his life. He owns 17 courses: 12 in the US, 2 in Scotland, 2 in Dubai and 1 in Ireland (where the NLU boys just finished up).

Much like his presidency, his courses are not without controversy. It’s been alleged that Trump Turnberry was paid for with Russian money, a seawall was built around Trump Ireland to prevent ill-effects of global warming (something Trump himself has denied the existence of) and there are numerous reports of corporate executives and lobbyists purchasing costly memberships at Trump courses, of which he has not divested from.

The myriad issues that arose during the development of Trump-Scotland were mentioned in season 2 of Tourist Sauce as main talking points for locals fighting against the development of Coul. It’s also been alleged that he is a chronic cheater and liar on the course.

This all surrounds the most visible and polarizing man in the world, coming at a time where the future of the sport is most uncertain. Is he a pox on our game, an elite purveyor of luxury courses and amenities who will #growthegame or something else entirely?

I’m shocked the 2022 PGA hasn’t been rescheduled yet.

I don’t want to get too deep into this topic because I don’t want to put anymore mental energy into thinking about Trump than is already necessary, but I think I can sum up my views like this:

I would never set foot on a Trump course and I instantly think less of anybody who does.

Any time I see a pro teeing it up with him, I’m either severely disappointed in the player if it’s someone I like or, if it’s a player I don’t like, I feel like all of my bad feelings about that player have been instantly justified.

Learning that Jack Nicklaus is a big Trump supporter caused him to transition from being one of my favourite golfers of all time to someone I absolutely hate. I can’t even watch him on TV anymore.

Here is my contribution to this discussion:
I opened The Refuge this morning to see Five Guys Burgers & Fries!!! Stoked. 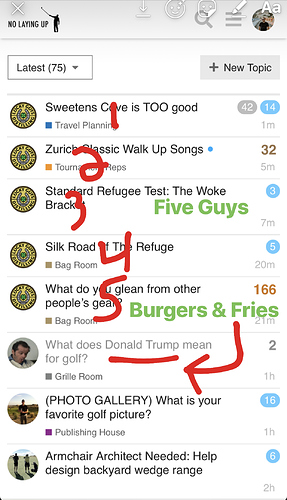 I have no doubt it will be my favorite contribution of the day. Nice work!

All of this (plus I am a Patriots fan). I was so disappointed when Rory played with him, and genuinely perplexed why the boys are playing Doonbeg on their Ireland trip with so many other fantastic options available to them.

Also: My wife pretty much hates golf and definitely hates Trump, so the association does not help my cause when I want to spend several hours of my weekend time playing or watching the game.

I’ve played ferry point… I don’t care if I ever play it again.

That sums up my thoughts on trump and golf

That was sort of the impetus for this topic.

FWIW, @MerchCzar briefly addressed this on Twitter yesterday. I’ll withhold judgement until I hear from them directly. 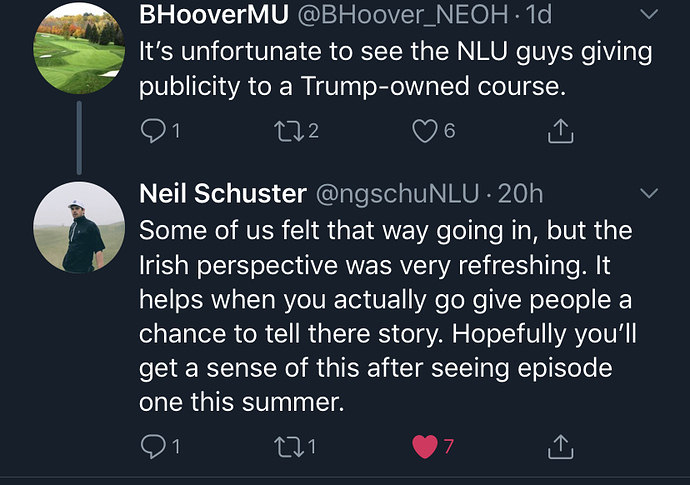 Notwithstanding that Trump is, in my view, one of the most despicable public figures in the world, I will not hesitate to tee it up at any of courses. The few that I have played have been really enjoyable, and the staff/caddies/pros were nothing less than genuine good people. Ultimately, boycotting a Trump course or property just because of Trump, while completely understandable, hurts his decent and hardworking employees more than anything else (including the many undocumented ones).

As with most of his life, Trump’s golf legacy is that he is a liar. Look at that swing, look at his posted scores, and then tell me his handicap is anything other than pure bullshit.

I saw that, too, and it was probably the reason I didn’t start the thread first, though I am still glad you did. I get that there are loads of real people who depend on his courses for their livelihoods, but there are the same number of real people depending on Troon/Prestwick/Western Gailes or Lahinch/Tralee/Ballybunion. When I only have so much time and so many dollars, I know where mine will be allocated.

Agreed. And I’m not saying people should go out of their way to play his courses or anything like that. But if you live in NYC and the best close-by option is Ferry Point, or you’re on a 10-day trip in Ireland and Doonbeg squarely fits your itinerary … basically, if you would otherwise play the course, I don’t think Trump should be an impediment. But to each his own. I concur with all of your sentiments about him.

Learning that Jack Nicklaus is a big Trump supporter caused him to transition from being one of my favourite golfers of all time to someone I absolutely hate. I can’t even watch him on TV anymore.

ps: not defending trump, but I refuse to judge someone just based on politics. Everything I see and hear from Jack makes me believe he is a great person and someone i respect.

One good thing about Trump: his vanity in stamping his name on everything he owns means I will never accidentally patronize one of his establishments. Also, from everything I have seen and read, Turnberry is the only true loss to me. I skipped Doonbeg even before he bought it, and Lahinch is my favorite course in the world so would always take a second chance to play there before going up the road.

I’ll say this: the only two things I like about Trump are a.) he’s a golfer and b.) he likes fast food. I sorta wish he would just go live his dream of playing golf and chugging Whoppers instead of dryhumping his way around the White House and bothering everybody.

To his credit, I have heard they’ve done good things to the Ailsa course at Turnberry. Not sure he made any of those particular course choices, but he facilitated/funded them. This is me trying to say something nice.

Have you seen Jim Furyk swing before?

This may be hard to believe but you can play golf at a Trump course and also not like the guy or support him. Doing so is not an endorsement of him. There are plenty of employees at his courses that are honest, hard workers and want to provide you an awesome experience, yet probably don’t like his political views. Go play and let them know their course is great.

Suggesting that people playing at his courses or playing golf with him are somehow lesser people is one of the dumber things you can think and is part of the season our society is so divided. It’s a round of golf, let’s not overthink it and assume Rory, the NLU guys, or anyone is making a giant political statement.

Like Rory roughly said, “If the President of the United States calls you to play golf, you answer it.” Pretty straight-forward.