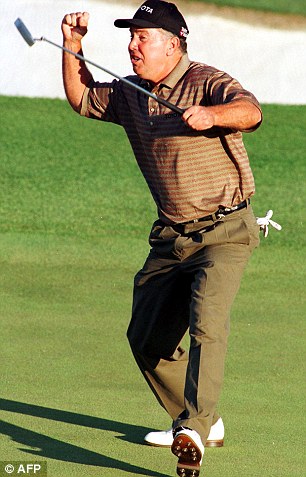 I like Linksoul but there stuff runs a little big as well.

YES! I’m down with the shirt (its touching the elbows lol), but I think I see pleats and there’s a 85% chance that belt has metal discs and the end is capped (which is my limit). I just remember Couples and probably everyone else back then pulling their sleeves up at the shoulder during their pre-shot routine, don’t know why but I love that.

Everyone is free to hate on me as I definitely deserve it too.

What drives me crazy is those days when half the field is wearing the same color combination - like a light blue shirt and grey slacks, or something. Since we know that most of them are being scripted by their clothing companies, it’s clearly a coordinated, intentional effort and yet it’s insane. (Sometimes it seems to be that two different companies went the same way and I guess that happens but it’s another reason to decry the scripting in general.)

And I’m honestly shocked that no discussion of white belts has happened thus far. The white pants and white belts can be buried in a ditch somewhere and the world will be a better place. (Especially the white pants that allow us to see what style of underwear you’re wearing…not cool dude not cool).

Maybe the best of all time.

You just be a big Perfect Club guy

White belts are usually all bad, but Spieth has a habit of making the white belt/pants combo look acceptable.

I am religious with my Nike golf shirts. They fit the best for being tall and slender (6’ 1"ish and 170lbs) and don’t always have to be bright colors. Pants is where I really struggle. I haven’t found a golf pant that fits me like I think it should. Working in khaki’s every day has its benefits, where my banana republic stuff will carry over to the course and fit right.

thats hitting below the white belt, pretty sure that guy had a nervous breakdown too.

So are there any golf fashion blogs or articles anyone follows?

@thedapperdrive on instagram is a pretty good follow. he does a lot of work with greyson now @tedscott

Bonobos makes great golf pants and have some good polos as well. I’m a bit of a shoe snob myself, and just ordered a pair of G/Fore’s last night. If anyone is interested Peter Millar is having a sale on their G/Fore collaboration. Sent the link to my buddy and my brother and they both bought a pair this morning. Looks like the sizes are going quick though!!

I was just looking at they greyson website, i love it. Good looking stuff.

check out www.fairwaystyles.com they are always running sales on pretty much every brand that people have mentioned here.

Look good, play well. Might be something to it.
Brands I’m watching;

The big thing for me is to get away from the shiny golf shirts. I like well-fitting clothes including euro-style pants. I also like the monochrome look, however, DJ doesn’t look right when he does it. Maybe cuz of the way he saunters around.
Not a fan of Nike, Adidas or Puma looks lately.

Finally those of us that have been dying to wear Jim Nantz branded clothes are being rewarded.

I genuinely love Vineyard Vines stuff - not for playing, just for announcing to the world that I’m a middle-aged white male with an excess of disposable income. (Just kidding - it’s super comfortable, well made and looks good on me.)

I’m a big fan of the more classic looks mixed with some interesting colours/prints/fabrics. Gmac is the best in my perspective.

GMac’s got great looks! Somehow gives off a classy Irish vibe when he does it, as well.