As the complaining about CBS’s coverage reaches its predictable fever pitch, is it possible to just watch and not complain about it? Is their coverage terrible? Yes. But do we have to bring this up literally every single CBS tournament? I’d argue no.

Much like the Kuchar story, I can’t be the only one that’s tired of the complaining and just wishes it would go away. I realize this is almost impossible for the NLU boys as they get off ripping into the coverage at every opportunity but it just turns Twitter and other places into an unbearable circle jerk. Maybe we can all just agree it’s still terrible and move on? Or is this just wishful thinking on my part?

I’m ready to sign on to this. I, Warbird, vow to not complain about coverage for the remainder of the season.

I am normally way in on this take. But sometimes it’s so egregious that it takes away from the golf tournament. This seems to be one of those weeks.

I didn’t even think of taking a pledge. Great idea and can serve to hold me accountable.

I, GluteActivator, vow to not complain about the golf coverage for the rest of the season.

What channel is the Genesis on now that cbs coverage is over?

I can’t really tell but that may be true. I will consider you partially in on the pledge, extreme circumstances withstanding.

Echo chamber - an environment in which a person encounters only beliefs or opinions that coincide with their own, so that their existing views are reinforced and alternative ideas are not considered

Thank you. I’ll put you down in the “Opposed” column.

No. Bitching is my outlet and keeps me sane.

In addition: bitching about the coverage and slow playing is fully justified. If the coverage was somewhat good I’d find something else to bitch about.

Now this is disgraceful… 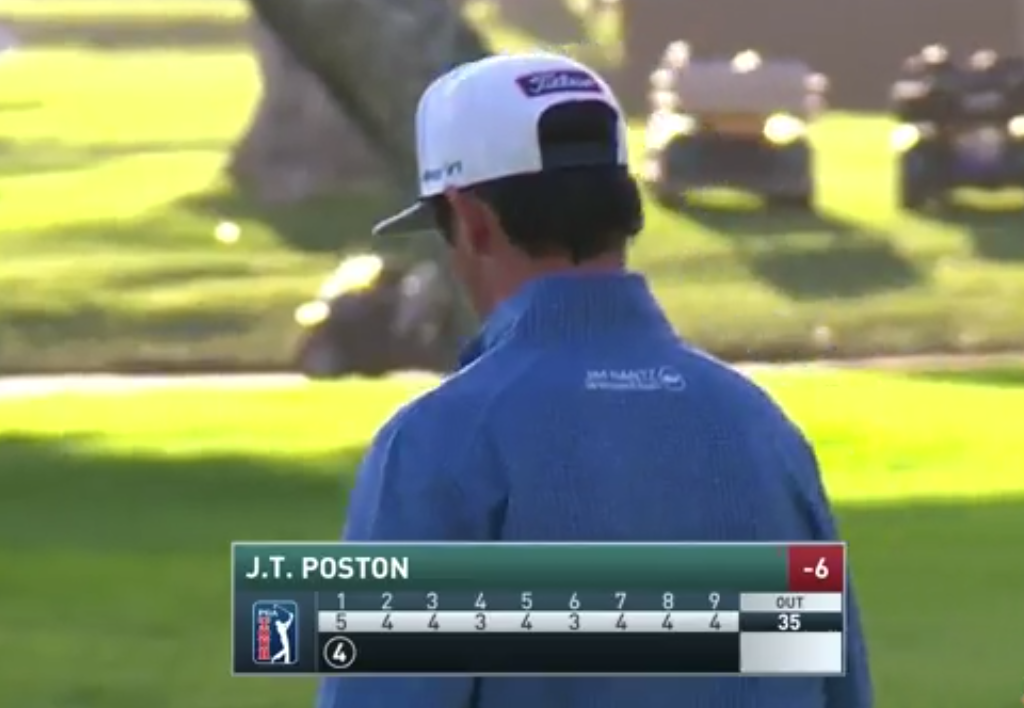 CBS tried really hard to get a shot of a player's Jim Nantz Collection logo...

Jim Nantz has his own clothing line from Vineyard Vines (of course), and for a few minutes on Saturday, CBS tried really hard to get the logo on air.

@djpie was on fire on today’s pod. Scorched earth and I loved every second it. An totally rational.

I’m actually with you on this @GluteActivator. I hadn’t seen this before recording the pod last night, but that was the whole point behind my “retirement” from telecast talk. I’m all for pointed criticism in the hopes of improving something, but wholeheartedly agree that just playing the hits isn’t productive (although they did shorten the coverage gap 15 mins after the incessant bitching became overwhelming).

I think for me personally the CBS stuff has hit a point where it’s just making me not want to watch anymore. (Or making me feel like a remorseful sucker when I do.) And that’s really wild to say/seems worth pointing out in a larger context.

But, to the point of this thread, I’ll take the pledge. I, DJPie, vow not to complain about the golf coverage the rest of the year (probably because I’m just going to start turning it off when it gets bad enough).

Why turn off when you can just DVR like every other 21st century person? I KNOW THE COVERAGE SUCKS. I know the commercials suck. You know what doesn’t suck? The “>>” button on my remote.

Lol, you’re not going to like the answer, but it’s because I don’t have DVR. I’m a cord cutter (millennial affffff). And while I definitely agree with the DVR sentiment, I kind of think (from our weird media-ish perspective) that makes it even MORE pertinent to point out because it pretty much flames the entire business model of the Tour. Which is at least semi-interesting.

Is there any other way to try to get them to improve the coverage? I agree the echo chamber is trash but I dont know of any other strategies to get something to change

I’m all for pointed criticism in the hopes of improving something, but wholeheartedly agree that just playing the hits isn’t productive (although they did shorten the coverage gap 15 mins after the incessant bitching became overwhelming).

This simple sentence articulates my point so much better than my big dumb brain could. I totally get all the reaction and think it’s more than fair, but at some point it just feels like yelling for the sake of yelling.

I firmly believe network execs largely don’t care about the noise of social media (the coverage gap change may be the exception to this theory). You can complain all day on Twitter but it’s just some intern or social media manager that sees the responses. Execs only see how many eyeballs are still tuning in and that’s mostly what matters to them. If you stop watching CBS broadcasts, and their numbers dip relative to other networks, that will cause them to change.

Fair, no doubt if viewership went down they would change…question is how much would it have to decline by vs. how many people cant stand the coverage so bad they turn it off. As bad as the coverage is its not gotten to a point where I wont watch (yet)