Does Neil Have the Most Room for Improvement in the History of Golf?

you’re gonna post all this and not even call the man in?

I am with @gatorz7888, he has to much fun playing they way he does. You have to really pay attention to your game to score around par. I really don’t think that is where he gets his enjoyment. And to tell you the truth that is where we all should be, enjoy the people you are playing with, the course and have fun.

I think I could help @MerchCzar go low. I’ve been coaching one sport or another as long as I can remember, and I’m very familiar with the mental speed bumps that keep knocking him off course for a great round. I’ve helped athletes and friends with similar issues and some of them went on to be real damn successful.

But here’s what I want to know: do you really want @MerchCzar to go low? Do you want him to embrace the stoicism required to move through a round like a hawk gliding on a thermal, or do you love @MerchCzar precisely because he plays each round of golf like hockey player in a shootout—approaching every shot as though it is a challenge to his very soul?

If we were to “fix” Neil, who would he become? Who would begrudge a paddler for preferring the rapid to the river bend? The rapid’s beauty is in its power and its chaos and the possibility that both might lead to spectacular failure. So, too, is @MerchCzar’s.

Can I get this in a vinyl cursive script to stick on my wall. (jk I hate those things) but Love this quote.

Who would begrudge a paddler for preferring the rapid to the river bend? The rapid’s beauty is in its power and its chaos and the possibility that both might lead to spectacular failure.

Based on the swing videos that have been posted I find it hard to believe. I was promted to start this thread after seeing DJ choke 5 inches up on a 3 wood and proceeded to cold top it. Lets start seeing some scores.

Anybody who has a 120 mph driver swing speed has the potential to be scratch or better. Doesn’t mean they’ll get there, but the potential is there. So yeah, Neil has that potential. I would bet if he got good instruction, he could get close to scratch pretty quickly.

Interesting take. How’s your own golf game? (Not an attacking question – I agree with everything you’re saying about the @MerchCzar’s game – just always curious for the context from the source.)

I think spikes instead of the 2017 hyper dunks might help

he just needs to eliminate a foul ball or two during his rounds. easier said than done as i have been trying to do the same. hero shots are more fun to talk about than pars, that is a fact.

he just needs to eliminate a foul ball or two during his rounds. easier said than done

Even though I agree with this, I played one of the best rounds of my life in Air Max Trainer 1s.

come on this is just patently ridiculous. what’s next, he needs to hit it closer to the hole?

i would shoot a million

I honestly think it’s because it forced me to tame my swing a bit to keep my feet from slipping, but yeah it’s definitely not a model for long-term success. 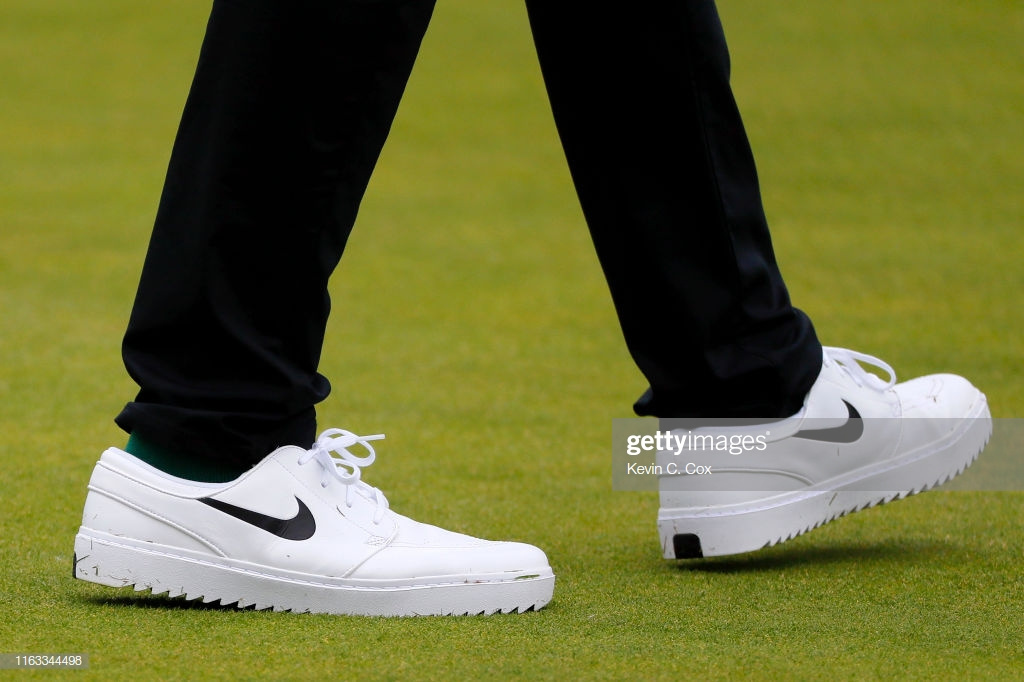 Not in these, he had to much traction at The Masters.

Just saying shoes have nothing to do with golf swings or scoring.

They do help with the “Look Good Play Good” part though

As someone who has played many rounds in those exact shoes, they are verrrrrry different than playing in basketball shoes.