Nestees, new feature this week that’ll hopefully be a recurring bit. On the heels of our dinners in LA and the feedback from his appearance on the NLU podcast, Jim Herman has joined the refuge. He’ll operate on here as @gohermie, and his consigliere, @BamaBearcat, will help curate which ones he replies to instead of us throwing him straight into the deep end.

Go ahead and ask Hermie about his career, life on tour, his interactions with Bob Huggins throughout the years (ok that’s just me), etc.

What is the funniest player story you have from inside the ropes during a tournament? Family-friendly good, non-family-friendly better.

(Wait, am I even allowed to ask this question as a non-Nesting plebeian, a member of the Refuge’s commoner class? Or will my question get disappeared like a video of Jon Rahm’s caddie conversation?)

Have you tried to get Trump to improve his golf wardrobe? White shirt with khakis and a red hat gets a bit stale.

Is it true that @jimithng23 was the best caddie you’ve ever had?

Does @BamaBearcat end each conversation with you with an “@BamaBearcat”?

but I want to throw him straight into the deep end…

Can we get your extensive thoughts on Skyline Chili and acceptable toppings and additions that make for the best possible Skyline experience.

Welcome @gohermie!! Loved the podcast. Adopted Cincinnatian myself, the city has developed a bit of a cult-following here on the Refuge thanks in large part to your generous donation and the good work we all did for Stella at our Duel here at Avon Fields… Wanted to say thanks again for being so generous with that!!

A couple quick-hitter questions: Favorite golf hole in Cincinnati?? What would you shoot at Avon playing your best?? How many strokes could you give @Randy at Avon and still beat him?? (he did shoot 65 there).

As a native Cincinnatian, you of all understand that not all Skyline’s are created equal, and that the ‘wear and tear’ of the porcelain chili pots gives off certain variability to the baseline taste of our beloved cuisine.

So, what is the best Skyline in the city? Personally, my lunch spot on Cornell Rd. in Blue Ash (s/o owner Scott Callaway who has GOLF channel on 24/7) has a prolific Cheese Coney. They also serve the hot sauce in standard condiment bottles, which allows unabated application on your meal.

he did shoot 65 there

acutally nandy, the course was a composite set of tees and unrated, so no one can really say what @Randy’s differential was…

given that i quoted you the stats from the back, the course can only be easier, so a higher differential

Maybe not so much a question as much as a statement, but I’ve rewatched the post-round interview at the 2016 Shell Houston Open many times as one of my favorite feel-good and motivating moments in golf. (https://www.youtube.com/watch?v=kLSUhnylxY4).

I listened to the NLU podcast and know that you shed some light on this previously, but I am hoping you can share a bit about that moment: the win, qualifying for the Masters, and prepping for and playing in your first Masters.

Is there a standing group of bowlers on Tour? 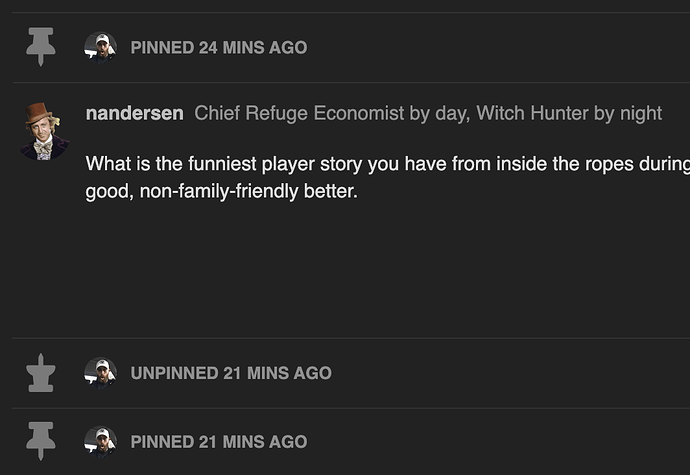 How did the Golf Digest article on Shawnee Lookout come about? In other words, who contacted whom, and what was that experience like?

Article for those who have not read: