Anyone use or experiment with this?

My brother in law is a consumer beyond consumers and literally buys everything, whether legit or flavor of the month. He’s raving about Arcos and it’s ability to provide yardages with wind, keep stats, track whatever you want and basically give you a shotlink experience to your own rounds.

I don’t even use range finders or gps watches. Partially stubborn, also because I value the feel aspect of the game…maybe a throwback to a fault. Plus, as a 15, the difference between a few yards is hardly my problem, execution is.

Arccos Golf uses sensors attached to your clubs to automatically track each shot, providing data & analytics designed to improve your game faster than ever.

oh, I’ve thought about it

I bought and used its competitor, Game Golf, a couple of years ago. It was not (at that time, maybe it’s better now), totally user friendly as you’d need to tag your club before every shot. Which sounds simple enough, but I would focus on my shot and constantly forget, so have to upload my round and go back and identify several shots.

The stats were not that helpful. My perception of my yardages was pretty spot on except I found I don’t hit my 3 wood anywhere close to how far I thought I did. The analysis is provided did not shed any real light on my understanding of my game. I can be okay off the tee, my irons are solid, my putting okay (for my handicap) and my shortgame pathetic. It was interesting to see each of these compared to other handicaps, but I really already understood what I need to improve.

It was fun, but I got bored with it after about 10 rounds or so.

I’ve had it for about a year and all-in-all I would recommend.

First and most importantly, it’s much more reliable than I expected it would be. Granted I came in with moderate expectations that it would reliably pick up shots based on the reviews, I’m happy with that part. My only quibbles are that I receive a few dead sensors when I got it (which Arccos was quick to replace) and it doesn’t always work great in low light conditions (which is something they disclose - as part of the sensor on a specific club’s ability to “wake up” is based on ambient light. Makes twightlight rounds a little tricky.

As a GPS device it works great and I do find the “true yardage” feature to be helpful. The statistical stuff is also pretty awesome, even for an average golfer like me, though to truly get the best out of it, it’s not completely automatic (making sure it tracks sand shots, accurately placing the location of the pin on the green, making sure putting distances are correct, etc.). The statistical stuff is also cool for those that play the same course a lot - as it’s very easy to see where you miss the most often (though for most this is probably a confirmation of what you think rather than totally new information).

Similarly, the yardages by club is interesting though is only so helpful in the windy environment in which I typically play. Can definitely be a bit humbling to see how short I hit the ball (especially in the winter). I also learned I’m a much better putter and a much crappier driver of the golf ball than I thought. Interesting to see how this translates to Arccos’ “handicap” for each facet of the game (a 6 for putting and a 21 for driving

) While this wasn’t totally surprising, it is interesting to see a number put on it. I also like the ability to visually see how I play a specific hole over time (it will overlay all of your shots on a specific hole over X amount of time) - though it doesn’t always help me solve the common miss.

How much does it cost, all in?

$249 for the sensors. H/e a big benefit to me is the integration with the Apple Watch. Their Apple Watch app works well and it’s nice that even though I have to keep my phone in my pocket I never really have to look at it. Of course Arccos isn’t unique in this aspect but I do like its integration - so add an Apple Watch to the cost If you don’t have one and that interests you.

I bought it and have now used it for five rounds, which triggers the caddie function. (That is, now when I’m 165 yards out, it will tell me what club I should use based on the data it’s collected.)

My thoughts are such:

I’ve used Arccos for the past 3 seasons. I love it. Does help with yardage and I love the stats. Pretty seamless and easy to use. Every course you’ll ever play is on there. Big fan.

I love it. Review: https://youtu.be/NdWwBqxi2_M

I’m a big fan - it has really helped my game.

just ordered the sensors off Ebay for $139…the Apple watch, I’m not sure about.

Jumping in to quickly plug Apple Watch as being awesome in general. I have gotten a lot of use out of it using the free Grint app to track my score and basic stats and use basic GPS front/middle/back yardages.

my problem is, these other watches cost someone a lot of gd money…

I knew I wanted the type of information this provides, but I was being cheap (and waiting to see which app would “win”) so I used the Game Golf app and manually tagged shots for the past 3 years.

A couple of my buddies have shot scope, and the watch included with that is just ridiculous looking. Game Golf was too slow with their latest product rollout, and I liked what I had been seeing from Arccos so I took the leap.

I got a set of sensors for my birthday, and only have 27 holes on them so far, but I’m already in love.

The way they handicap different parts of your game is really going to help make my practice time more efficient. I can see why they advertise how much this can help someone improve.

Forgive me if this is an idiotic question, but with the Apple Watch integration - do you need to wear the watch while playing? The functionality sounds great, but the watch is a dealbreaker for me. I can’t wear anything (watch, ring) on my hands, other than a glove, while playing.

pretty sure you can have your phone in your pocket…same thing.

They’re also taking pre-orders for a small little clip (Arccos Link) that you can put on your belt or in your pocket as a phone / watch alternative.

FWIW I keep my phone in my back pocket, and haven’t had any issues with missed shots so far.

good to hear. I’ve had the app downloaded for at least a year. My little dustup with Scott Fawcett on Twitter last year made me think the whole GD space of tracking shots was probably overhyped, but reading comments here in the refuge, plus my consistently 1/2 club short lately has me willing to spend the money on the sensors. LFG!!!

For me, having this kind of thing makes it totally worth it: (new irons… uggghh) 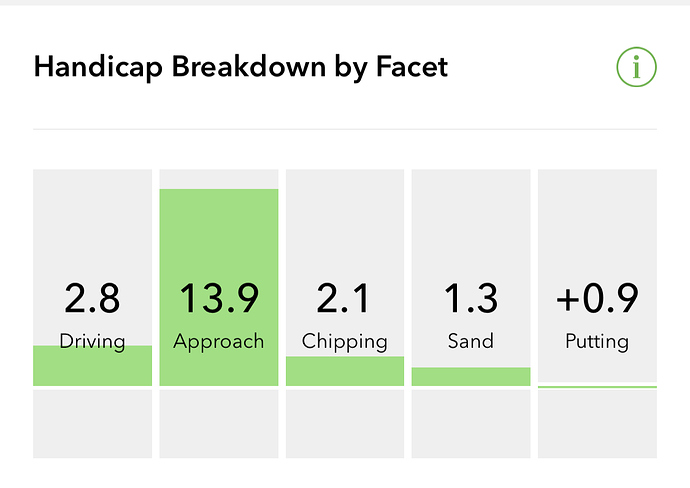 And stats wise, this is just the start.