Worth having an official thread for actual Ryder Cup week?

What are our boots on the ground seeing and hearing in terms of potential pairings? Who is practicing with who? Pods being set up?

Think I saw a pod of DJ Spieth JT and Rickie… does that mean anything at all?

I thunk course setup is usually overblown but for the most part this week I think it massively favors the Euros. It’s a regular tour stop for them and not conducive to a deep driving game.

Just had a rant about this on the other thread. I don’t get the course set up thing. Most of the European players play most of their golf in the US on the PGA Tour. Rory, Rose, Rahm, Stenson, Casey, Sergio, Poulter all live full time in the US. And the rest, like Fleetwood, Hatton, Noren and Molinari have all played extensively on the PGA this year.

If you’re looking for bombers, Rory has the longest average on the PGA Tour this year. Rahm hits the crap out of it. Rose and Sergio both average over 300 yards.

Yes, it’s in the Euro Tour as a regular stop, but while many of them have played it, few play it every year. And a good few of the Americans have played it over the last few years.

I just don’t think it’s such a big advantage any more. Both teams play the same golf in the same tournaments now.

What singles matchups do you guys want to see? Here’s what I want, not necessarily what I’m predicting.

Reed vs. Rory rematch (duh)
Phil vs. Sergio rematch (also duh)
Bubba vs. Poulter (EMOTIONS!)
DJ vs. Rose (battle for #1 in the world)
Tiger vs. Stenson (ball striking fiesta between veterans)
JT vs. Fleetwood (“How are they RC rookies?” + NLU ambassador duel)
Rickie vs. Rahm (streaky putters)
Finau vs. Noren (rookie bombers)
Bryson vs. Molinari (technical Trackman studs)
Webb vs. Casey (steady eddies)
Spieth vs. Hatton (couple of kinda whiny guys tbh, would be intense though)
BK vs. Olesen (Sorry Thunderbear, you might be the sacrificial lamb here)

Bryson v. either Rahm or Hatton would result in the most entertaining television I could imagine. All inner-circle members of the Opus Dei Society (h/t Young Neil).

I’d be game for that. Spieth playing Molinari would be good in that scenario. 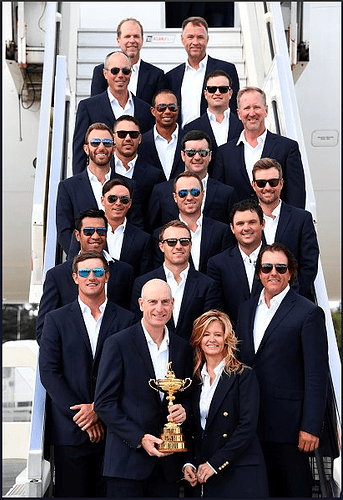 Tiger vs McIlroy in the last match with the cup on the line is the dream.
Phil vs Nobody because I don’t like watching the USA lose points
Reed vs Poulter first off on Sunday
Bryson vs Hatton

Tiger with the Ant-Man shades.

Man what a squad! I love it. They all look great.

I love that Koepka being on a lower step makes it look like he’s the shortest guy on the team.

Fair point on the Euros making the PGA Tour their home and such. But correct me if I’m wrong and I’m going on gut here, but the Euro team is strong from a driving accuracy stanpoint and should benefit from tighter fairways and more of a premium on placement / tactician based approach. That said, if DJ or Brooks and Bubba etc are all hitting 4 iron off the tee, then they should be fine as well.

Pods out there for the practice rounds today:

No Spieth and Reed.
No clue how entrenched the pairings are but Tiger could play with Reed AND Bryson and who knows, even Phil???
Phil and Bryson can nerd out together.
JT Rickie Spieth all interchangeable. DJ could maybe hide Spieth’s struggles?
Koepka Bubba and Finau all good for Webb to wedge in from, although Finau and Webb is unlikely. See Brooks playing with both Tony & Webb at somepoint and both are solid from my seat. Bubba gets one team match in with Webb and calls it a day until singles.

Rickie has a five head!

Bryson and Tiger were talking about putting at the Tour Championship. I feel those two could pair well together. Tiger has always been a strategy nerd.

Can we stop the contrived internet overreaction to this photo? It’s an unremarkable picture of 18 conservatively dressed golfers with sunglasses on.

what else are we supposed to do on the internet though

It’s either this or the 347,365th iteration of “Ryder Cup pairings I want to see”